Joke's on Him: Adam Carolla Slammed for Saying Men Are Funnier Than Women 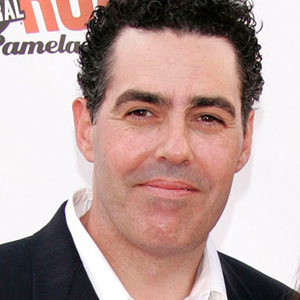 Adam Carolla just turned the tables on himself.

The funnyman became the laughingstock today after word got out that he told The New York Post that female comedy writers were usually the least funny people in the room.

"The reason why you know more funny dudes than funny chicks is that dudes are funnier than chicks," Carolla cracked while promoting his new book, Not Taco Bell Material. Given a chance to, er, explain, he continued: "When you're picking a basketball team, you'll take the brother over the guy with the yarmulke. Why? Because you're playing the odds. When it comes to comedy, of course there's Sarah Silverman, Tina Fey, Kathy Griffin—super-funny chicks. But if you're playing the odds? No."

Leaving the other problems with that statement by the wayside for now, let us introduce Carolla to a whole bunch of funny people, dudes and chicks alike...

"Wait, Adam Carolla, is he the one who did the voice of the parrot in Aladdin??? He makes me giggle," tweeted Girls creator and star Lena Dunham.

"The biggest impact this whole Adam Carolla scandal has had is discovering 95% of people have no idea how to spell 'Carolla,'" tweeted writer and comedienne Jenny Johnson.

"Thank you, Adam Corolla. Your terribleness gives all of us the opportunity to scream how NOT TERRIBLE we are!! YAY!" added Chappelle's Show cocreator Neal Brennan, who perhaps unintentionally proved Johnson's point as well.

MORE: Christina Applegate in Anchorman Sequel: "She Will Be Back," Predicts Producer Judd Apatow

And the tweets from assorted actors, comedians and writers went on:

Dave Holmes: "Why are we ruining our perfect not caring what Adam Carolla thinks streak?"

Kelly Oxford: "You know what Adam Carolla said about women not being funny is bull, at a party last week I made him laugh three goddamn times."

Carolla had a fleeting chance to not be the object of quite as much scorn, but he only dug the hole deeper on The Talk this morning.

Asked by Sara Gilbert how he feels about gay people, he said, "That's dangerous—not being gay! Listen, I wish more people were gay. If you've driven over to the gay section of Los Angeles, it's like a golf course...Real estate values go boom!"

But then the former Man Show host acknowledged making cracks about gay people in his comedy routines, saying, "Nice doesn't get laughs, especially on stage, that's what I'm saying...When did we start holding comedians up to the level of politicians and school teachers? We're comedians. We're supposed to say these things."

Perez Hilton, who was also a guest on The Talk today, tweeted: "Ugh. Adam Carolla is attempting to explain his homophobic jokes and failing miserably."