Kristen Stewart Talks Her Early Twilight Days: "Me and Rob Got Into a Lot of Trouble" 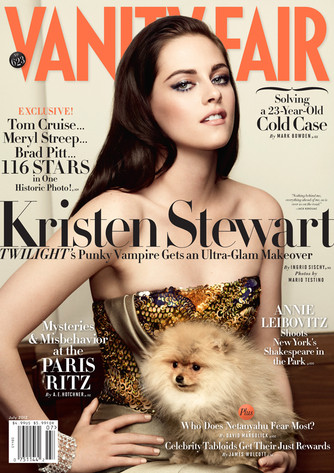 Ready for the best Kristen Stewart interview ever?

We first showed you the exclusive images of K.Stew's glammed-out Vanity Fair photo shoot back in January—and now the July issue is finally on sale this week.

Of course, we already swooned over the pics where Kristen rocked some seriously chic designer couture in high-fashion shots by Mario Testino, but it's the interview inside the issue that has us loving Kris even more (seriously, how is that even possible?!).

Check it out (even if you're complaining about K.Stew overload) we promise this is one you don't want to miss:

The in-depth interview perfectly captures all things Kris—Vanity Fair praises the babe's many talents, while also pointing out how her perceived "flaws" make her totally unique.

Case in point? Kristen's signature scowl. Miss Stewart's more than happy to explain why she doesn't feel the need to flash a fake grin:

"I have been criticized a lot for not looking perfect in every photograph," Kristen fessed. "I'm not embarrassed about it. I'm proud of it. If I took perfect pictures all the time, the people standing in the room with me, or on the carpet would think, 'What an actress! What a faker!'…What matters to me is that the people in the room leave and say, 'She was cool. She had a good time. She was honest.'"

Can't argue with that rationale! And we've always admired the Twilight babe for sticking to her guns—she'd far rather wind up on a worst dressed list than sport a style she doesn't like—and her independent 'tude is what makes her so down-to-earth.

Kristen's do-it-like-I-want approach has also served her well—she was involved in the decision to cast Robert Pattinson as Edward Cullen in The Twilight Saga, and, well, we all know how that turned out. Even Twilight director Catherine Hardwicke admits the chemistry was sizzling from day one:

"Honestly, I was nervous," Hardwicke remembers. "I saw they [Rob and Kristen] were so attracted and Kristen was under-age. I said, 'Rob, we have a law in this country under 18. Don't get in trouble here.' I felt I was in the presence of something strong and powerful," she continues. "When Pattinson left, Stewart said, 'It's him.'"

Still, four years later, the stubborn, headstrong and totally beloved couple is not only still going strong, but also enduring lasting franchise success. So with that, we'll give Kristen's BF the final word on our fave babe:

"The perception of her is that she's 'awkward,'" Rob admits. "But it's funny knowing her. It's the absolute opposite of what people think. She's insanely confident."

Be sure to check out the rest of the Vanity Fair interview and all of Kristen's stunning shots! Then sound off below with your thoughts in the comments!