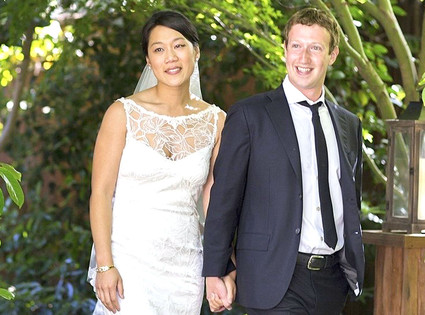 Mark Zuckerberg's status went from "in a relationship" to "married" over the weekend.

So far, we know the 28-year-old Facebook founder gave longtime love Priscilla Chan "a very simple ruby," that fewer than 100 people attended the nuptials at their Palo Alto, Calif., home and the guests thought they were there for a graduation party.

But though the vow swap was, like the groom, a pretty low-key event and not indicative of his billionaire's-club status, it was still a wedding, for Pete's sake!

So, here are five things to know about the day that was special enough to get Zuckerberg out of his signature hoodie:

MORE: Facebook to Make Bono the Richest Musician Out There?

1. The Wedding Singer: Zuckerberg's pal and Bay Area native Billie Joe Armstrong—you know, of Green Day!—performed at the party. And, according to People, the music was a gift from the "American Idiot" artist, not a paid performance. Needless to say, we hope the newlyweds and their guests had the time of their lives.

2. The Dress: Chan wore a sleek, laser-cut ivory gown by Los Angeles-based couturier Claire Pettibone. Intricate floral embroidery and matte, satin-lined sequins cover the entire gown, including its illusion jewel neckline, sheer back and chapel-length train. According to the designer's website, the "Sky Between the Branches" design retails for $4,700.

MORE: Jesse Eisenberg on Mark Zuckerberg SNLMeeting: It Was Wonderful

3. The Grub: The wedding party feasted family-style on Fuki Sushi and Mexican food from Palo Alto Sol. And for dessert—handcrafted mice from Burdick Chocolate, which has an outpost in Harvard Square and is known for its adorable, animal-shaped confections.

4. His Better Half: Chan, 27, and Zuckerberg dated on and off (but mostly on) for nine years, since meeting at a frat party when they were both students at Harvard. Unlike her drop-out hubby, however, Chan got her bachelor's degree in biology, spent two years working as an elementary-school science teacher in San Jose, Calif., and just graduated from UC San Francisco School of Medicine. Zuckerberg has credited her with inspiring Facebook's organ-donation registry (he signed up as a donor last month) and he studied Mandarin to better communicate with her extended family in China. Next up for the blushing bride? A pediatrics residency!

MORE: The Social Network: Where Are They Now?

5. Just in Case: The super-private couple have stayed mum on whether or not a prenuptial agreement preceeded their nuptials. But, obviously, these two didn't rush into anything, and Chan has known Zuckerberg since he was just a T-shirt wearing, code-writing computer nerd. (Oh, wait...) In fact, she didn't move into his house until 2010, according to Forbes, and Chan is being referred to as a candidate to join the ranks of philanthropic power players like Melinda Gates and Laurene Jobs. Besides, California is a community-property state, and whatever Zuckerberg earned before he tied the knot is his.