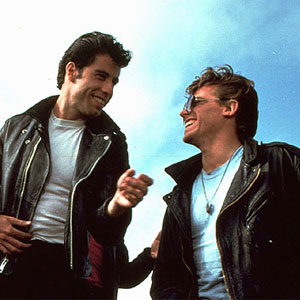 In a statement to E! News, the 58-year-old actor's attorney Marty Singer is slamming a National Enquirer story that claimed Travolta once tried to perform oral sex on his Grease costar Jeff Conaway.

Conaway's longtime girlfriend, Vicki Lizzi, is quoted in the tabloid saying the purported encounter occurred in the early '90s at Conaway's residence. According to her account, the erstwhile Kenickie had been sleeping and was awaken by a groping Travolta. The alleged encounter, Lizzi claimed, severed a decades-long friendship between the two—that remained estranged at the time of Conaway's death. The actor died last May from complications of pneumonia at the age of 60

According to the Enquirer (the report isn't available online but has been excerpted by the New York Post), Lizzi said she became aware of the supposed incident via a suicide note left in 2006 when Conaway unsuccessfully tried to kill himself.

But Singer insisted nothing could be further from the truth, pointing out that Enquirer parent American Media Inc. has been driving the salacious coverage of Travolta in recent days.

"This spate of recklessly published tabloid stories is just part of a malicious tabloid agenda to boost lagging sales by running outrageous defamatory stories about my client sourced by people seeking notoriety or a payday," the attorney said.

"Vicki Lizzi, the late Jeff Conaway's estranged girlfriend, has been a regular paid source for the [Enquirer and its sister publications]…yet this is the very first time we are hearing this new outlandish story that is supposedly based on a six-year-old notarized suicide note," he said. "Vikki Lizzi sold more stories than we can count to [Enquirer parent company] AMI publications both before and after Jeff Conaway died."

A rep for Lizzi, meanwhile, denied that she has had a long-standing relationship with the tabloid.

"After the passing of Jeff, Jeff's estranged family started a smear campaign against Vikki through The Globe and The National Enquirer to discredit her reputation in hopes of them selling Jeff Conaway's autobiography for their own personal gain, which was left to Vikki in his will," the rep said.

"My client is 100-percent telling the truth, as Jeff Conaway made Vikki Lizzi the executor of his will and requested that she carry out certain wishes. These are not Vikki's claims, these are Jeff's words written in a [notarized] note and states at the end with, his fingerprint, in Jeff's handwriting, ‘This is for printing in the newspapers.'"

The news comes amid turmoil in the two lawsuits filed against Travolta by the anonymous masseurs.

John Doe No. 1, who brought his case months after being the subject of Enquirer cover story for which he reportedly passed a lie-detector test, was dropped by attorney Okorie Okorocha earlier this week and yesterday retained high-profile lawyer Gloria Allred to represent him against Travolta.

Then this morning, Okorocha confirmed that he was fired by John Doe No. 2. "John Doe 2 has a new lawyer. Don't know who," the lawyer told E! News.

MORE: Jeff Conaway Dies After Being Taken Off Life Support

Last week, Okorocha said that there were other John Does seeking to bring cases against Travolta and the attorney insisted he still planned to bring those cases, though non have been filed.

For his part, Singer is seeking to have both men's names revealed and had been attempting to depose one of the masseurs today. With the legal switcheroo, that's not going to happen anytime soon.