Jennifer Lopez Talks Adoption, Life as a Single Mom and Having More Kids: "It Would Be a Blessing" 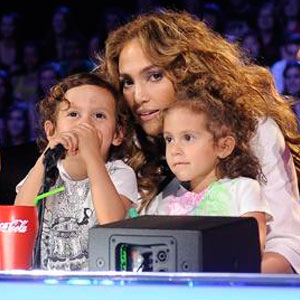 And out of the What to Expect When You're Expecting gals gang, Jennifer Lopez definitely has the most mom cred as she's raising two children and managing life as a single mom in the limelight.

So, what did the busiest gal on the boob tube have to say about giving her adorable tots, Max and Emme, a little sibling in the future?

WATCH: We're Livestreaming the What to Expect When You're Expecting Premiere—Only on E! Online

"It would be a blessing for me," Jennifer fessed at the What to Expect When You're Expecting press junket in Beverly Hills. "But right now I'm focused on doing it right with those two [Max and Emme]."

Awww. It's just so touching how much J.Lo loves being a mom—despite her megasuccess and killer career, the twins (from her previous marriage to Marc Anthony) are clearly Jen's No. 1 priority.

And not only does J.Lo adore being a mom, but she also revealed her nine-month journey was incredibly easy. Jen admits she had that picture-perfect pregnancy, similar to Brooklyn Decker's character in the flick:

Heck, if her pregnancy was such a piece o' cake, then Ms. Lopez should put another bun in the oven! Especially with that charming beau Casper Smart constantly by her side…

But if that doesn't pan out, there's always the adoption route that's ever-so-popular with single celebs (hello, Charlize Theron, Sandra Bullock and Madonna) and turns out, playing an adopting mother in the film gave Jen a whole new perspective:

"Before the movie, I never really thought about adoption at all and I was so focused on having my own and it took me awhile to have my own. But after the film and during the making of the film, I held those two little Ethiopian twins and you fall in love instantly…It really occurred to me, I can see how somebody can do this."

READ: What to Expect When You're Expecting: Guess Which Star Couldn't Stop Fondling Her Breasts?!

So sweet! And trust, those scenes with the Ethiopian babies are too die for cute. But even if more kiddos aren't in store for J.Lo's future, she's still your (above) average single working mom with advice on how to balance it all:

"All you really care is not messing up the baby part…that comes first for me and then everything else falls into line after that, that's my philosophy," Jen explained. "It's just like any single working mom's plight…it's a juggling act and you just do the best you can"

Well Jen, for what it's worth, we think you've done a fabulous job so far. Here's hoping for a sibling for Max and Emme in the future!

We're livestreaming the What To Expect When You're Expecting premiere on Monday—only on E! Online, so be sure to check back for exclusive scoop from the star-studded cast!

What to Expect When You're Expecting hits theatres May 18.