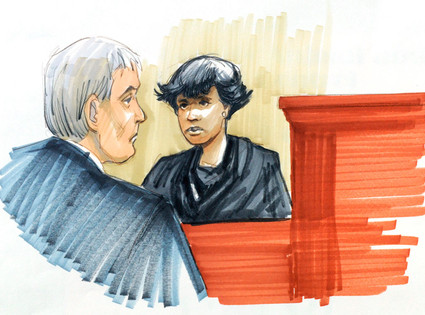 Never mind saving bombshells for the end of the trial—prosecutors brought out their big gun on day one, surprisingly calling Jennifer Hudson as the very first witness in her family's murder trial.

Though the Oscar winner was on the list of potential people to take the stand, it was unclear whether she would actually be called to testify in the trial against William Balfour, the estranged husband of her sister Julia and the man accused of killing Hudson's mother, brother and 7-year-old nephew back in October 2008.

But called she was.

Wasting no time, Jennifer immediately spoke of how she warned her sister not to marry William.

"I told her over and over again to not marry him," Hudson said, voice trembling, on the stand. "We did not like how he treated her."

Hudson, who appeared dressed-down for her testimony, wearing little makeup, with her hair pulled back and donning a black suit, also appeared to be crying when she told the court she "talked to her [mother] every single day."

The tears continued in earnest when she described the last time she saw her slain family members, a meeting which took place just one week before they were killed.

"It was my mother, my brother, my sister and my dog," Hudson said, explaining that they had paid a surprise and welcome visit to her home. "I was so surprised. The whole family is here.

"That was the last time I saw them," she said, crying. "Thank God I had the opportunity."

Hudson said that she spent the visit playing piano with her brother and mother and at one point became so overcome with emotion that the judge stopped her testimony to ask if she was OK. She took a moment to dab her eyes before resuming.

"I did everything in my power to get there," she said after hearing the news from her sister, adding that she even put out a $100,000 reward for finding Julian, who they first believed to be missing rather than dead. "I tried to keep my distance from William."

Julia was next on the stand and said that Balfour turned so jealous after she accompanied her sister to Japan for a Dreamgirls promotional trip that when she returned, he wouldn't let her son Julien hug or kiss her.

MORE: Will Nicollette's second trial prove luckier than her first?

In the courtroom providing moral support for Hudson are her fiancé David Otuga and other members of the Hudson family.

Balfour is charged with first-degree murder in the death of 57-year-old Darnell Donerson, 29-year-old Jason Hudson and 7-year-old Julian King, in addition to home invasion, aggravated kidnapping, residential burglary and possession of a stolen motor vehicle. He has pleaded not guilty to all charges.

Opening statements kicked off this morning with prosecutor Veryl Gambino telling the jury that Balfour had forewarned his violent relationship with Julia Hudson, telling her, "Julia, if you leave me, I will kill you. I will kill your family first and you will be the last to die."

Gambino said the duo's relationship turned "angry and resentful" and that while they had separated by February 2008, Balfour was "always on the block" and would spy on his ex. On Aug. 1, one day after Julia rebuffed Balfour's advances to get back together, the gun belonging to her brother Jason went missing.

The trial is expected to last roughly four weeks.

TAGS/ Jennifer Hudson , , Top Stories , Breaking
GET POP CULTURED!
*Email entered incorrectly. Please try again.
By subscribing to our newsletter you agree to the Privacy Policy and Terms of Use
Daily
Weekly