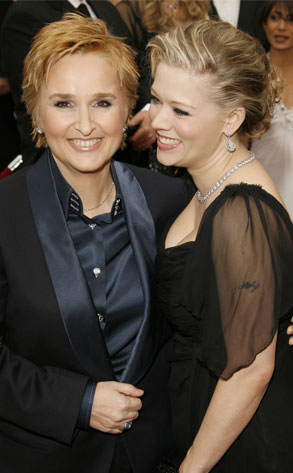 Where did Melissa Etheridge and Tammy Lynn Michaels go wrong?

They seemed so happy once upon a time, tying the knot in InStyle Weddings-worthy surroundings, having twins and building a life together.

Today, two years after their breakup, the sparring exes were supposed to be back in court to talk custody issues, capping a week of nasty back-and-forth allegations. (The mediation hearing apparently wound up being rescheduled—probably for the best.)

But we decided to look back to see how the onetime lovers turned into a couple of haters:

Sept. 19, 2000: Etheridge and Julie Cypher, who famously had two kids together with the help of David Crosby's sperm, announce they are separating after more than a decade together. The "Come to My Window" singer claimed Cypher was unfaithful in her 2002 memoir The Truth Is...:My Life in Love and Music.

Sept. 20, 2003: They swap vows in a commitment ceremony in Malibu that is later featured on the ABC special InStyle Celebrity Weddings.

October 2004: Etheridge reveals that she is battling breast cancer and becomes a vocal cancer-awareness activist, later discussing her use of medical marijuana to combat the negative effects of chemotherapy and radiation.

Oct. 16, 2006: Michaels gives birth to daughter Johnnie Rose and son Miller Steven, conceived via an anonymous sperm donor. Etheridge adopts them, as she did her children with Cypher.

Feb. 25, 2007: Michaels is by Etheridge's side at the 79th Academy Awards, where the Grammy winner picks up a Best Song Oscar for "I Need to Wake Up," from the de regueur documentary, An Inconvenient Truth.

October 2008: After a California court overturned the state's ban on gay marriage, Etheridge announced that she and Michaels planned to legally tie the knot. A month later, after the court's decision was blocked by the passing of Proposition 8, the singer said she would stop paying her state taxes.

April 2010: Etheridge and Michaels break up after nine years together, issuing a terse statement asking for privacy. Etheridge told Oprah later in the month that the split was "as mutual as those things can be."

July 2, 2010: Etheridge files to dissolve their domestic partnership, citing irreconcilable differences and asking for joint custody of the twins. Michaels later blogged that she found out about the split from the media: "Her broken promises told to me by headlines….could you stop blind sighting me?/ Have a good concert."

MORE: Seal Files His Own Papers in Heidi Klum Divorce

July 6, 2010: Michaels counterfiles to end their marriage, asking for sole custody of the kids and spousal support.

July 13, 2010: A judge shoots down Michaels' demand for $50,000 in child support and legal fees. Etheridge's lawyer says the singer was paying her ex $2,000 a month plus household expenses.

Jan 18, 2011: Several months after they attend the Emmys together, Etheridge reveals she's in a "committed relationship" with Nurse Jackie creator Linda Wallem. Michaels writes on her blog that day: "i moved out november 23rd 2009 / she said it would help / i was convinced it would / too and i trusted / there was / no one else / i didn't know / there was someone moving in / as i was moving out."

April 9, 2012: Michaels files a settlement brief stating that she "can't live" on the $23,000 in monthly support payments she's getting from Etheridge, with whom she is sharing custody of the kids.

April 10, 2012: Etheridge files a lengthy brief accusing Michaels of trying to "dial down" her time with the kids and otherwise making it difficult to make up for time she misses seeing them while she's on the road.

TAGS/ , Divorces , Top Stories , , Custody Battle , Breakups
GET POP CULTURED!
*Email entered incorrectly. Please try again.
By subscribing to our newsletter you agree to the Privacy Policy and Terms of Use
Daily
Weekly