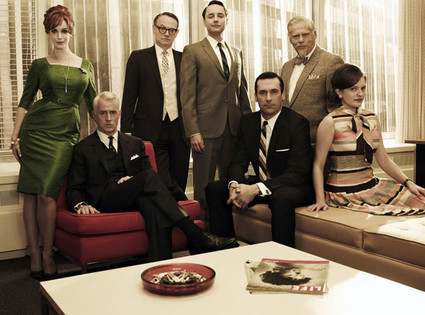 *Spoiler Alert: Don't read this season premiere recap if you haven't yet watched the episode as there will be spoilers. Wait, you're still reading? OK, but don't get mad if we talk plot points.*

Now where were we?

Last we saw him, manly enigma Don Draper was dropping loving, intelligent Faye for an impulsive proposal to his hot, young, good-with-kids secretary Megan; beleaguered bombshell Joan was attempting to deal with a surprise pregnancy; and the rest of Sterling Cooper Draper Pryce was trying to stay in business while having a few drinks.

And now? Well, the season 5 premiere began with an expected splash…

…as members of a rival advertising firm drop water-filled sacks on the heads of a civil rights-minded picket line—setting up a neat distinction between the antics of the all-white boys' club boardrooms of Madison Ave. and the sweeping cultural changes taking place out in the streets. And completely missing the point, Sterling Cooper Draper Pryce responds to this racist pranksterism with a joke of its own: an ad announcing that it is an equal opportunity employer. Except, as far as they know, they ain't making any changes. Yet.

But this two-hour premiere written by Matthew Weiner offers plenty of conflicts to dig into: Megan not only married the boss but she's moved from secretary into creative work; the continuing backward behavior of the Mad men toward women, African-Americans and homosexuals is putting them more and more out of step; and, well, a whole host of various marital and family issues. All that, plus we first got the indelible images of Megan singing goofy French song "Zoo Be Zoo Be Zoo," and then later cleaning the house in her skimpy black underwear...why exactly? Because she's just so angry at Don, that's why!

Still, it's nothing a shag on the carpet can't fix—for the moment anyway.

MORE: The Walking Dead: Everything We Already Know About Season Three

So that's the broad scope: The times are a-changing and the skirts are a-rising, but what's going on with Don (Jon Hamm), Peggy (Elisabeth Moss), Pete (Vincent Kartheiser), Roger (John Slattery), Megan (Jessica Paré) and the rest?

Don Digs Domesticity: Newly married and about to turn 40, weekend dad Don dotes on his visiting kids by making breakfast in his huge family-style apartment and using his chiseled straight-arm in place of a seatbelt. Gone is the gloomy pad of last season, Don and Megan live in a colorful high-rise apartment that's just perfect for a groovy surprise 40th birthday bash—which Don endures even as Megan dances and purrs through a French song that both embarrasses him and titillates all the assembled men. But Don doesn't like surprises, so Don goes to bed drunk and angry. You're welcome.

Joan Alone: Home with her baby and her visiting mother, Joan needs to get back to work. She snaps at her mom and seems miserable being away from the office—though thankfully she doesn't seem to dislike her baby. So there's that, but it's only when she comes to visit Lane that she really starts to feel needed, important and where she belongs.

Pete Is Growing Up: Sure, he'll always be a bit of the grasping creep who got Peggy pregnant and feels slighted by everything, but Pete is shaping up to be the Man in Charge: He's working hard to bring in clients, avoiding excessive drinking and smoking and developing into a thoughtful husband and father. And if that means butting heads with Roger to get a better office, then so be it. Pete will not be denied.

Roger, Over and Out? Roger is definitely struggling. But he's at his funniest when times are tough, and the wounded lion spends the episode coaxing the secretaries to sit in front of his office, fending off Pete's advancements and insulting his own trophy wife as he heads off on an early-morning wild goose chase to steal a client.

And Betty—Wait, Where's Betty? We don't see January Jones' Betty this episode, but do get a look at the creepy Gothic gloom palace she lives in with her new husband, Henry. "Give my love to Morticia and Lurch," quips Don as he drops the kids off, and we kind of love him for it.

There's more potential trouble bubbling under the surface as Lane struggles with money problems and a strange flirtation with a woman over the phone, Peggy works too hard on the Heinz campaign and then shoots her mouth off to Don at the party and Ken (Aaron Stanton)…well, he always seems perfectly happy and unchanged by the world. Good for you, Ken.

So we got drama, humor and rough housecleaning sex—as well as insider gags, like Roger seeing Joan with her (and his?) child and announcing, "Where's my baby?" as he kisses Joan on the cheek.

So what did you think? Was it worth the wait or do you want to send the creative back to work up a new campaign? Hit the comments.