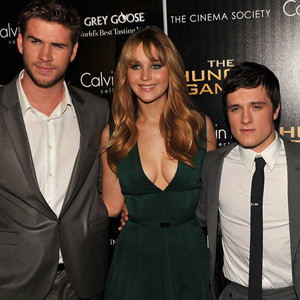 Tonight is the night, Mockingjays!

When the clock strikes midnight, everyone will be hitting the cineplex to finally see The Hunger Games. And circa 2:30 a.m., we're positive you all will be gushing over Jennifer Lawrence, Josh Hutcherson and Liam Hemsworth.

But let's all be honest with ourselves: that so was not always the case. So we asked the three stars how they were able to handle the very vocal fan backlash when their casting was announced:

First, remember when J.Law nearly wasn't even Katniss at all because (as she admitted to Moviefone) the babe worried the franchise flick would be "too big"? Well, she has no regrets about it now:

"The private life thing, that's something that when you become an actor you take into account," Jennifer explained to us, nixing the idea that those "disgusting" paps were her biggest fear. "It was knowing that from the time I say yes, my life will be completely different—and then being scared that I'll only be able to be seen as this when anybody sees me in another movie."

But she did say yes. And for a while, the Internet responded with "Uh, no!"

Many loyal H.G. fans were adamantly opposed to Jen's casting as Katniss, citing everything from her hair color to her build. And the feeling was mutual for Josh and Liam, who seemed to have flip-flopped roles.

So how did they handle it?

"You don't read it. That wouldn't be a good idea," Jennifer told us. "I think the biggest one at the beginning was my hair, which I just thought was funny because I was like 'Do they think I'm just going to be blond as Katniss?!' "

Mr. Hutcherson got far more flack for his brown locks though when it was announced he'd be cast as the very blonde Peeta.

READ: Hunger Games' Elizabeth Banks Reveals Which Couple Would "Have Fun in the Sack!"

"The only time I was aware was when the press told me," Josh 'fessed when asked about naysayers. "I never went online and looked at any of that stuff."

Liam agreed, "No, no. I have made mistakes in the past of reading things online. And you may read a bunch of good stuff, but you'll only remember the bad things. So we kind of keep that out of our heads."

But Josh did go blonde. And can now answer the ultimate question: Do blondes really have more fun?!

"I don't know," he laughed when we asked, before Liam playfully chimed in: "Were you dumber as a blond or a brunet?

Without hesitation Josh replied, "I was definitely more dumb…dumber?"

READ: The Hunger Games: Is It Already the Biggest Thing Ever?!

And as for Jennifer's fear that she'd only be Katniss from here on out? She seems content with that, too:

"I wanted to make the movie, and it's this character that's incredible. She's iconic," she gushed. "If you're going to be typecast, it should be the best character you've ever read. And that's what she was for me."

Well we can't think of anybody more perfect for these roles now. Make sure to come back to The Awful Truth after you get home from the theater tonight to discuss the flick in a special midnight party post!

TAGS/ The Hunger Games , Jennifer Lawrence , Josh Hutcherson , Liam Hemsworth
GET POP CULTURED!
*Email entered incorrectly. Please try again.
By subscribing to our newsletter you agree to the Privacy Policy and Terms of Use
Daily
Weekly