Whitney Houston's Daughter Bobbi Kristina Tells Oprah Winfrey: I Have to Carry on My Mom's Legacy 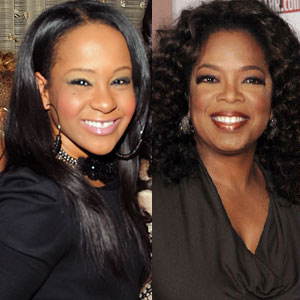 Oprah Winfrey said as she opens the show, "Those closest to Whitney have remained silent...until tonight."

That's the talk show host's dramatic start to her exclusive sit-down with the late Whitney Houston's family, including her daughter Bobbi Kristina, brother Gary and sister-in-law Patricia, who was the legendary singer's trusted manager, friend and one of the last people to see Whitney alive.

During the 90-minute special, Whitney's family members opened up about their memories of the singer, her relationship with Bobby Brown and what they claim really happened the day she died. Plus, Oprah asks about Whitney's behavior in the days leading up to her death, Bobby leaving the funeral early and Whitney's drug use.

At the beginning of the special, Oprah asks Pat how Bobbi Kristina is dealing with the loss of her mother. "She's grieving. She lost her mother. So you have to give her some time to make adjustments," she admits. "It's not going to be easy, but she has a lot of love from family." Soon, Bobbi Kristina comes in and embraces Oprah. "I'm doing OK," Bobbi Kristina says. "I'm getting through it. I'm doing as good as I possibly can...just trying to keep going."

While Bobbi Kristina says some days are "very much" harder than others, she says her mother's spirit is helping her get through this difficult time. "I can hear her voice in spirit talking to me, 'Keep talking to me. I got you.' She's always with me. I can always feel her. I can always feel her with me," she explains. "She always asked me, 'Do you need me?' And I caught myself, out of nowhere, I didn't even know I said it, I said, 'I'll always need you.'"

Of her last day with her mother, Bobbi Kristina says she spent it in her mother's arms. "It was so early in the morning. I went to go get her and I said, 'Come lay with me,'" she says. "She stayed with me all night and all day. She was just rubbing my head and holding me. I just slept in her arms."

MORE: Sneak Peek: Whitney Houston's Family Talks to Oprah: "The Handwriting Was on the Wall"

Bobbi Kristina's fondest memories of her mother? "On tour, to see her smile, to see her happy and to see her on stage being Whitney Houston, being who she is," she says. Bobbi Kristina says she plans on pursuing a career in the music and entertainment industry. "I'm her daughter. I have to carry on her legacy...It's a lot of pressure, but she prepared me for it."

Bobbi Kristina has been staying at Whitney's house, but admits that the first night after her death she couldn't stay there. "The next morning, I woke up and I heard her say, 'All right, come home now.' And when I came back home, I felt humble, I felt OK."

Of her decision to take part in this special, Bobbi Kristina says she wanted people to know the truth about her mother. "She wasn't only a mother, she was a best friend. She was a sister, a comforter."

Asked when she knew Whitney was in trouble, Pat says, "Honestly, I guess I would say it was the end of the '90s." When Oprah asks Pat if ex-husband Bobby Brown was to blame for Whitney's drug addiction, Pam answers, "I can't say that he introduced drugs to her. I don't think that's true." At one point, Oprah asks Pat if she knew that the drugs would end up killing Whitney, she says, "The handwriting was kind of on the wall. I would be kidding myself to say otherwise."

Two nights before Whitney's death, Pat attended a pre-Grammy party with Whitney because she was "concerned" and felt like something was wrong. Pat admits there was a confrontation with X Factor contestant Stacy Francis. "There was no physical fighting," Pat clarifies, addings that words were exchanged.

While reports suggested Whitney's behavios was erratic in the days leading up to her death, Pat denies that she was taking drugs, but admits she doesn't know "what happened with her that day."

When Oprah asks about the day Whitney died, Pat explains, "It was just a usual day." Pat left the hotel to pick up something for Clive Davis' party later that night and says she had Whitney's assistant Mary check on her before she left.

Later in the day, Pat was heading to Whitney's hotel room as her sister-in-law was trying to get in touch with her, when she heard screams. "I saw the hairstylist drop to her knees and I kept walking very slow. A woman opened her door and said, 'Is everything alright?' and I said, 'Dial 911'...I knew something was wrong. I was just numb," she says.

"When I got into the room, I saw my brother trying to revive her to the point of exhaustion," Pat says of her brother Ray, Whitney's security guard. She confirms that Whitney was found in the bathtub, but she doesn't know how she got there. "I just know that they had to pull her out of there." Pat also says Mary was the first person to find Whitney.

Whitney's mother Cissy Houston declined to take part in the special, but Oprah says she told her, "I'm not ready to talk right now, but I want people to know that we're not angry with the funeral home with the picture."

Four days after the memorial service, pictures of Whitney from the private family viewing were leaked to the media. "I felt very violated and it was very intrusive. It was very wicked," Gary says of the leaked photo, while Pat adds it's worse that a tabloid printed it than someone took it.

Bobby Brown made headlines during Whitney's funeral when he left just before it began after a reported spat. Gary says he's not really sure what happened at the funeral but denies reports that Whitney's family didn't want him there. "That's not true. He was supposed to be there. I don't know what went on." Pat says Bobby reached out to her a couple of days after the funeral to ask about Bobbi Kristina.

What did you think of Oprah's special? Sound off in the comments!