Dennis Quaid's Wife Files for Divorce: So Much for the Right Stuff 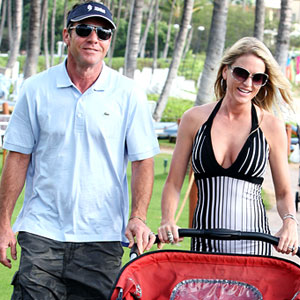 Their marriage was far from heaven.

Dennis Quaid's wife has filed for divorce seeking to end her nearly eight-year union with the Hollywood star, E! News can confirm.

"We can confirm that Kimberly Quaid has filed for divorce. Contrary to what has been reported, a satisfactory settlement is being worked out for both parties," reps for Quaid tell E! News.

What's more, a Travis County court clerk in Austin, Texas (where Kimberly is from originally) confirms that they do have a divorce filed on March 2 by a B.K. v W.D.

While the court clerk could not confirm the initials stood for Kimberly Buffington and William Dennis (Quaid's full name is Dennis William Quaid), the divorce petition filed obtained by E! News fits the couple to a 'T."

Kimberly Buffington-Quaid cited good ol' irreconcilable differences as the reason for the split and is demanding their community assets be fairly divided and she be given spousal support and attorney fees.

"The marriage has become insupportable because of discord or conflict of personalities…that destroys the legitimate ends of the marriage relationship and prevents any reasonable expectation of reconciliation," read court docs.

The petition stipulates that Kimberly temporarily gets possession of the pair's house and Mercedes while Dennis gets the condo and their Cadillac Escalade. They also must share a third Range Rover they own.

As for the kids, a temporary custody order has also been put in place that afforded both equal time this past weekend with their 4-year-old twins, Thomas and Zoe.

The petition states that neither Quaid nor his estranged missus can remove the children from school or take them out of state unless the two have a formal custody agreement or a judge has authorized it. And last but not least, neither party can say anything "vulgar, profane, obscene or indecent" to each other.

Setting the stage for what looks like a contentious divorce battle ahead, the 57-year-old actor filed a response saying he "prays" Kimberly takes nothing.

This is Quaid's third go-round at holy matrimony.

The thesp was previously hitched to Halloween and Stripes actress P.J. Soles from 1978 to 1983. He then fell in love with his Innerspace costar Meg Ryan and the two tied the knot in 1991 and had a son, Jack Henry (who is playing Marvel in the highly anticipated big-screen version of The Hunger Games). After he and Ryan divorced in 2001, he met Kimberly, an Austin, Texas-based real estate agent, and two made it official in 2004.

TAGS/ Dennis Quaid , Divorces ,
GET POP CULTURED!
*Email entered incorrectly. Please try again.
By subscribing to our newsletter you agree to the Privacy Policy and Terms of Use
Daily
Weekly