The Hunger Games Primer: What You Need to Know 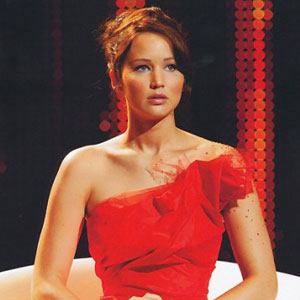 Or maybe you're still living in the good ol' days of Twilight.

We're here to help. Don't look clueless at your next chic, deathmatch-themed dinner party! Consult this handy primer to all things Hunger Games, and by premiere night on March 23, you'll be rattling off facts like a jabberjay...

MORE: Watch The Hunger Games Premiere, Every Amazing Minute of It!

1. The story is about a giant outdoor cage deathmatch...for kids! Really. Lead actress Jennifer Lawrence may be old enough to order a beer, but her character, Katniss Everdeen, is 16. Using her favorite weapon, a bow, Everdeen fights for her life against kids as young as 12. A total of 24 kids go in to the annual Hunger Games. Only one, usually, emerges triumphant.

2. It's a world of the future! Everdeen and cohorts live in a country called Panem, which is code for North America After an Apocalyptic War That Crushed Nearly Everything. Now Panem is divided into 12 weak—often hungry and poor—districts, all surrounding a wealthy Capitol. Children from the Capitol aren't forced to fight to the death, natch, only the poor "tributes" from the districts.

MOST DANGEROUS GAME: Who Got Hurt Off-Camera?

3. The story's influences are interesting, and occasionally controversial. Before Collins penned The Hunger Games, there was a 1999 book called Battle Royale, which is eerily similar in premise. (Collins claims she'd never heard of that book until after she turned in her own manuscript.) As for Collins herself, she says her novel is inspired by the ancient Greek myth of Theseus, as well as reality TV and the Iraq war.

4. Speaking of reality TV...Look for plenty of references to America's current obsession. The entire Hunger Games contest is televised throughout Panem. No, Jeff Probst does not host, but look for Elizabeth Banks and Stanley Tucci as a couple of characters clearly inspired by reality TV.

5. There are awesome weapons and genetically engineered...surprises. Look for tracker jackers—weaponized bees, for lack of a better term—and mockingjays, the avian descendants of jabberjays, birds that once doubled as spies. And that's not all. Consider yourself warned.

6. Did we mention a love triangle? Katniss finds herself attracted to two young men throughout the trilogy. There's Gale Hawthorne, a hometown hunk played by Liam Hemsworth, and Peeta Mellark, whom Everdeen meets through the Games. Mellark is played by Josh Hutcherson. Look for plenty of Team Peeta/Team Gale paraphernalia in coming years.

TAGS/ The Hunger Games , Jennifer Lawrence , Josh Hutcherson , Liam Hemsworth
GET POP CULTURED!
*Email entered incorrectly. Please try again.
By subscribing to our newsletter you agree to the Privacy Policy and Terms of Use
Daily
Weekly