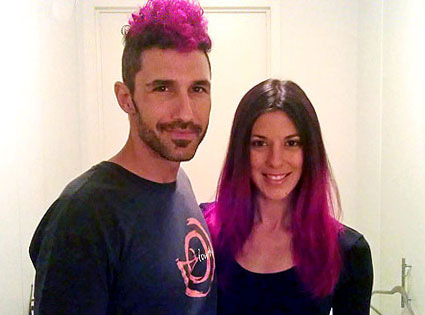 The Survivor: Africa champ underwent a stem-cell transplant Wednesday to treat a recurrence of his Hodgkin's lymphoma cancer—and he has his brother to thank for the immuno-boost.

Outwit, outlast, outplay has never quite meant so much.

"Today I leap into a healthy new body. Today is the start of the rest of my life. Thank You to my bro Lee & all who have supported me. Love!" the reality star tweeted presumably before undergoing the transfusion.

And of course, Jenna Morasca, Zohn's girlfriend and winner of Survivor: The Amazon, was right there with him the whole time.

"Thanks @JennaMorasca for being by my side. Love you," he added in a follow up.

Just before the transplant, Morasca wrote on Twitter: "Today @EthanZohn gets new stem cells & new cancer free life FOREVER! And we get our lives back. Send positive healing vibes #getbetterethan"

During the operation, Zohn's gal-pal kept her nerves calm and distracted herself by drawing a little self-portrait which she subsequently posted as a twitpic.

After it was over, Morasca was all smiles.

Getting a new lease on life hasn't been easy for the former Boran tribesman, though change is (see he and Morasca's recent cut and dye job in honor of World Cancer Day).

In May 2009, Zohn first learned he had a rare form of the disease called CD20-positive Hodgkin's lymphoma, after doctors found a swollen lymph node and a mass on the left side of his chest. After undergoing intensive rounds of chemotherapy, the 38-year-old professional soccer player's cancer appeared to be in remission until Nov. 2011 when new cancer cells were detected, localized this time in his lung.

In an interview with People, Morasca said that despite the setback, her beau has every intention of whipping this latest challenge, just as the Survivor stud did when he successfully ran last November's New York City marathon.

"Ethan asked the doctor what was the record time for getting out of here, so he wants to beat that," she told the magazine. "His doctor said there was no prize, and Ethan said, 'Yes, there is. You're going to tell the other patients that I made it out in three weeks.' "

She added that Zohn also received the transplant at the same ward where he was first diagnosed with Hodgkin's, something that's been tough for the pair.

"No one wants to come back here. Even though the nurses and doctors are wonderful, this is one place where you really don't want to see anybody ever again," said Morasca. "Then, starting the chemo and being attached to a pump that you're going to be attached to for the next three to five weeks made it very real."

The procedure will hopefully provide Ethan with the lifelong protection he needs to prevent the cancer's return. Zohn, with Morasca at his side, is expected to remain in the hospital until he gets the OK from doctors that his body has accepted the new healthy stem cells.

We wish him a speedy recovery.

TAGS/ Survivor , Hospitalized , Sick Bay , Injury And Illness
GET POP CULTURED!
*Email entered incorrectly. Please try again.
By subscribing to our newsletter you agree to the Privacy Policy and Terms of Use
Daily
Weekly