No mom wants her 5-year-old daughter being called a "prosti-tot" on her watch.

But that, according to Susanna Barrett and her attorney, is the rep that her little one has received since TMZ (and, subsequently, many other websites) posted a video of Toddlers & Tiaras star Isabella Barrett singing along to LMFAO's "Sexy and I Know It" and Rihanna's "We Found Love."

Barrett's problem isn't that TMZ posted the video. No, she gave them the footage, she told E! News in an exclusive interview, a few days after filing a $30 million libel suit against TMZ, the Huffington Post and London's Daily Mail.

It's that she was under the impression that TMZ was going to write a "fluff story," but ended up—in Barrett's eyes—making a "brazen attempt to sexualize" her child.

First off, Barrett says, her daughter was not performing in a nightclub late in the evening, but rather was engaging in an impromptu sing-along at a pet-charity dinner after the DJ encouraged her to get up and dance.

And Isabella was wearing her $5,000 pageant dress, her mom tells us, so why not?

"It was kind of a spontaneous thing," Barrett recalls. "You can see other people had their camera and cell phones out. You know Isabella is on a reality show so it's not uncommon for people to be taking pictures of her. There was a red carpet there, so we were taking pictures, as well."

As for the songs the child was singing, Barrett maintains that Isabella was only in the spotlight for about 30 seconds of LMFAO's "Sexy and I Know It" before Rihanna kicked in.

MORE: T&T Mom on Pageant Criticism: "It's Just So Much Crap!" 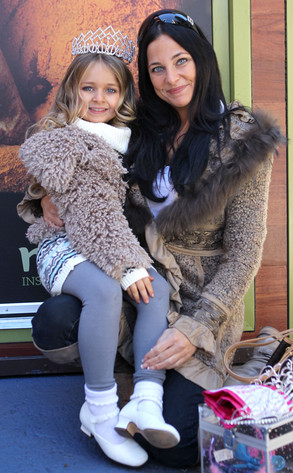 "She didn't know all the words, and the sensationalism of it was actually more exciting then actually what you're watching—and that's where the problem lies," Barrett says. "Isabella doesn't know all the words to the song and the DJ had to feed her words. It's a top 40 hit on the radio and that's not the issue—the issue is that [Isabella] doesn't know what sexiness is...She's sitting in a beautiful dress on a stool, first-pumping and not moving her body in any sexual manner—and again, because I think the pageant industry has good and bad, automatically when you see this video and hear she is a Toddlers & Tiaras star, automatically you think bad and there is no other story that you will believe."

As far as the song lyrics go, Barrett admits she "didn't give it much thought."

"If we were just sitting here discussing if Isabella should or should not know a top 40 song, that's fine, I'm up for that discussion," she tells us. "What I'm not up for is when you sexualize my daughter and say she was 'talking about her sexiness...she was in a nightclub.' Those things are inexcusable and are lies which have been proven, and again, the first story is what people remember, and unfortunately it has brought negativity to a great family. We are there promoting positivity."

TMZ's post about the video in question is titled, "5-Year-Old Toddlers & Tiaras Star Gets Down Inside Nightclub 'I'm Sexy and I Know It,'" and leads with, "She's just 5 years old, but Toddlers & Tiaras star Isabella Barrett is already making nightclub appearances—singing songs about her sex appeal—and TMZ has obtained video evidence."

"We are not the poster child for everything that is wrong with pageants," she asserts. "I'm sure it will just make Toddlers & Tiaras even bigger things. But things have escalated from us being on a reality show to us being in danger for our lives, and no one would I wish any of this upon, and people need to realize that [the drama] is just sensationalized."

And while she's asking for $10 million in damages per outlet, she'd be happy "with an apology and a retraction."

"The main goal is to clear Isabella's name," Barrett says, "and I will do whatever it takes."