Should the Demi Moore 911 Call Be Public? 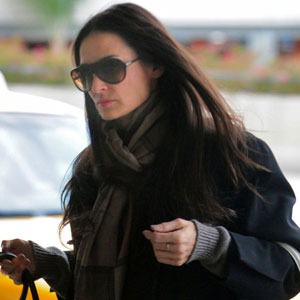 Hi A.B.! So Demi Moore's 911 call was the latest such call to be released to the media. While this is interesting to us, isn't there some sort of privacy act that forbids this? Is nothing sacred?!
—Freddie Ball, via Facebook

Of course some things are sacred...just not the things that celebrities think should be sacred, such as their desire to control what other people say about them at all times. George Clooney may be all a-bluster that the 911 call was released, too, but he and his powerful friends probably won't get their way on this one...

THE 911 CALL: What We Learned From It

Because releasing 911 tapes such as Moore's is a matter of law.

"It's public record under the California Public Records Act," says Jeff Hermes, director of the Digital Media Law Project at the Berkman Center for Internet & Society at Harvard.

There are some exceptions to this rule; an agency may withhold a record like this if it's against the public interest, for example. But really, there are some things in life more important than Demi Moore having an angst-free day, and public records are one of them.

"It's the right of the public to have access to information that helps us judge how their law enforcement officials are responding to their duties," Hermes points out. "Without that information, it's impossible to judge whether something like a 911 program is working, whether enough resources are being dedicated to those calls, and otherwise judge the success of that service."

And that judgment includes whether authorities treat all classes of people equally. If we quash a 911 call because it's about Demi Moore, then we can't exactly judge whether she's getting special treatment, or worse treatment, because she's a celebrity ... because we wouldn't know who she is.

CONFIRMED: Rumer Willis Was Present During the 911 Call

One final argument: You may be saying that these recordings shouldn't be released because they can be exploited by tabloids. It's a fair concern. It's just not big enough to merit withholding the tapes from the whole planet.

"There is the idea that some people abuse their ability to access these recordings and exploit them for entertainment or other purposes," Hermes admits. "But it's unwise to deny public access to this kind of information because of how some people choose to use it."

Couldn't have said it better myself.

If it makes you feel any better, some parts of the Moore 911 call dealing with medical information are being withheld from the public, reportedly at the request of the Los Angeles City Attorney's office. And there's already speculation circulating that Moore got preferential treatment in how that call was edited.

THE WAY THEY WERE: Demi and Ashton, in Pictures

TAGS/ Top Stories , Demi Moore , Hospitalized , Injury And Illness
GET POP CULTURED!
*Email entered incorrectly. Please try again.
By subscribing to our newsletter you agree to the Privacy Policy and Terms of Use
Daily
Weekly