Chuck Is Over. (Sob!) So What Did Those Final Moments Mean?! 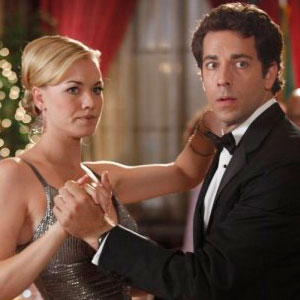 And not exactly how we thought the show would wrap up! You?

If you haven't yet watched tonight's series finale of NBC's Chuck, then for the love of all that is holy, do not read another word! But if you have, let's discuss the series' somewhat controversial (just us?) ending...

CHUCK FLASHBACK VIDEO! Our Favorite Laugh-Out-Loud Moments with the Cast!

Chuck and Sarah are together forever!

Yes, it seems the powers that be have decided to leave us with a romantic Sopranos-esque cliffhanger of an ending, one that does not tie things up with any sort of tidy little bow.

Tonight's two-hour series finale focused on Chuck's core coupling, Sarah (Yvonne Strahovski) and Chuck (Zachary Levi), and whether Sarah (who had lost her memory) would finally remember her true love and reclaim their relationship, which was slowly earned through five seasons of solid storytelling.

What we got in the very end? An amazing montage of their relationship over the past five seasons, as Chuck tells Sarah their story (hoping to bring back her memory), and then, in the final moments, Chuck going in for a kiss that Morgan (Josh Gomez) believed would magically fix Sarah's memory and...That's it. The series ended, with no clear indication as to whether the "magical kiss" brought Sarah's memory back.

But you know why I'm all right with that?

Chuck mastermind Chris Fedak specifically had the final scene take place on the beach where, in the pilot episode, Sarah told Chuck that everything was "going to be OK," a throwback he mentioned on the finale. So why don't we all agree to just take that as a sign that yes, the kiss worked, Sarah got her memory back, and that moments later they conceived little baby Bartowski before jaunting off to sign papers for their dream house.

Don't you dare tell me differently or I'll wrap a jacket around your neck and fling you out a skyscraper window.

To that end, Yvonne (so badass as old-school Sarah!), Zach (more heartwrenching as heartbroken Chuck than ever!) and the rest of the cast (shout out to Jeffster!) were all fantastic in this final episode, which reminded us all of why we fell in love with this series in the first place.

Also, you gotta wonder if this cliffhanger ending does mean Chuck might come back someday in some fashion, as Zachary Levi told us. "I've pitched some ideas to the powers that be," Zach says, "and I think it would be really fun to do...something. Even if it's a fun, like, hour and a half online-only movie, just for our fans to buy and to enjoy, and for all of us to get back together once a year and to continue these characters and this family." And we see Sarah with her memory back, right?!

Chuck might not go down in history as the most masterful TV series of all time, but dangit, it had more heart than 99 percent of the shows out there. And the fans loved it. A lot.

Farewell, Chuck. You will be missed.

Now...Your turn. Go! What did you think of the finale? Hit the comments!!

Need more help saying goodbye? Check out our favorite behind the scenes moments with the cast in these exclusive videos!

TAGS/ Zachary Levi , Chuck , Watch With Kristin , Top Stories
GET POP CULTURED!
*Email entered incorrectly. Please try again.
By subscribing to our newsletter you agree to the Privacy Policy and Terms of Use
Daily
Weekly