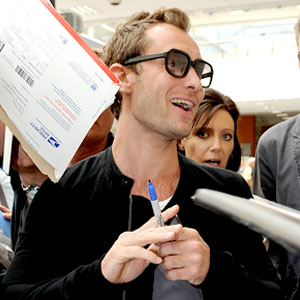 Rupert Murdoch's News Corp., the media company at the center of Britain's inquiry into press ethics begun in the wake of the News of the World phone-hacking scandal, today settled with 36 of its estimated 740 victims. It's the first of what's expected to be numerous settlements that could end up costing the company hundreds of millions of dollars.

And among those in this latest batch of settlements was a justifiably peeved Jude Law.

MORE: Pippa vs. the paparazzi!

As part of the legal process, victim impact statements from Law, among others, were read out in London's High Court this morning. Other high profile victims who settled today include Law's ex-wife Sadie Frost, footballer (and Cheryl Cole's ex-hubby) Ashley Cole, and Guy Pelly, the close friend of Princes William and Harry.

Law's lengthy statement spoke of the time period, between 2003 and 2006, in with "the News of the World conducted an illegal campaign of hacking and surveillance against me."

He said in his statement, read out by lawyer Mark Lewis—who incidentally was collateral hacking damage due to his relationship with Law—that he was unable to speak about the hacking before the proceedings ended.

"Now they are at an end, I can finally speak about what went on. For several years leading up to 2006, I was suspicious about how information concerning my private life was coming out in the press. I changed my phones, I had my house swept for bugs, but still the information kept being published. I started to become distrustful of people close to me."

As part of the settlement—Law received $200,000 plus undisclosed legal fees while Frost took home $77,000—the actor received the police file collected on his case, which he said rendered him "truly appalled." And which, yes, included his phone calls with his now infamous nanny.

"It is clear that I, along with many others, was kept under constant surveillance for a number of years.

"No aspect of my private life was safe from intrusion by News Group newspapers, including the lives of my children and the people who work for me. It was not just that my phone messages were listened to: News Group also paid people to watch me and my house for days at a time and to follow me and those close to me both in this country and abroad."

In court, lawyers for the tabloid paper at the center of the scandal apologized to the victims.

"I have now achieved everything I wanted from this litigation," Law said. "The News of the World has finally made admissions about the extent of their illegal activity and they have acknowledged that what they did was wrong. They have also finally admitted that what they did to me personally amounted to harassment and that it should never have happened.

"I hope this means that they will never invade my privacy again."

And that, not the payout, was what Law was after.

"For me this case was never about money. It was about standing up for myself and find out what had happened…what News Group did was an abuse of its freedoms. They have overstepped the mark for many years.

"They were prepared to do anything to sell their newspapers and to make money, irrespective of the impact it had on people's lives. It was not just those like me, whose work involved them being in the public eye, but also many other people, often at the most vulnerable times of their lives."

The so-dubbed Leveson Inquiry into press ethics in Britain is continuing on, as are the settlements.

Though not everyone is content to make do with an apology and a payout. Those victims who are not settling will move ahead with a trial scheduled to begin sometime next month.