Eyewitness: Beyoncé's Blue Ivy Is "Beautiful"—Now About Those Bodyguards... 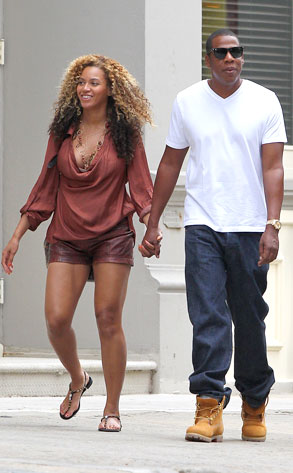 But when it comes to reports that the couple and their private security detail had the entire sixth floor on lockdown, there's a difference of opinion.

MORE: Beyoncé and Jay-Z Big Q's About Baby Blue Ivy: What's Her Name Mean? How Long Until a Photo?

On one side there's Tanisha Newton, a 24-year-old expectant single mother of two. Newton tells E! News that she and her two young children were asked to leave the floor on Saturday night despite her own advanced pregnancy (she says she is due on Jan. 19.).

"I was almost restrained and so were my children. It was bad because look who they are. They been pushing, tugging, [saying], 'Ma'am you have to move. This is a secluded area," vented Newton.

Newton says that she also got a brief view of baby Blue, shortly after the delivery.

"I don't remember the time but [Blue] was coming out of the room and [Beyoncé and Jay-Z's security] were protecting her like Michael Jackson's babies," said Newton. "I was really trying to see but I just caught a glimpse...she's beautiful."

MORE: Beyoncé and Jay-Z Finally Make It Official: "We Are in Heaven"

Newton wasn't alone in having gripes with what has been reported to be intense security.

New dad Neil Coulson spoke out in the New York Daily News that he was kicked out of the neonatal intensive care unit on multiple occasions while visiting with his premature twin daughters.

Per TMZ, some other new moms turning up for breastfeeding classes have even threatened to sue the hospital over their treatment.

However, according to another hospital visitor, things weren't really that bad.

A woman who had just visited a relative in the pediatric ward and wished to remain anonymous told E! News that she witnessed a number of individuals have run-ins with Beyoncé and Jay-Z's security—presumably because they were trying to sneak too close to the action. But as long as visitors had appointments, they were allowed through.

For its part, the Upper East Side hospital sought to distance itself from any controversy, via a statement saying the facility and its staff are "troubled by the misinformation being circulated in some news media reports."

Spokesman Frank Danza also dismissed several reports that the couple paid over $1 million to rent a floor of the hospital for the birth (a source close to the couple echoed that sentiment to E! News), and said that new parents were in an "executive suite" and "billed the standard rate for those accommodations. Our executive suites are available for any patient, including the food service and amenities provided to the Carter family."

As for the securty situation? Danza said that although Beyonce and Jay-Z had their own bodyguards, "the hospital has been and still continues to be in control of managing all security at the facility. We have made every effort to ensure minimal disruption to other families experiencing the births of their own children over the past three days."

He also added that no security would have prevented a parent from gaining access to the neonatal intensive unit and no family complained to the hospital about it.

"Lenox Hill Hospital takes patient privacy and safety very seriously," he added. "And while we congratulate the Carter family on the birth of their child, we value the loyalty of ALL our patients and always strive to ensure a positive experience, knowing that the birth of a child is a wonderful moment producing memories of a lifetime."

We think everyone can get behind that.

TAGS/ Beyoncé , Babies , Controversy , Top Stories , Jay-Z
GET POP CULTURED!
*Email entered incorrectly. Please try again.
By subscribing to our newsletter you agree to the Privacy Policy and Terms of Use
Daily
Weekly