Kourtney Kardashian and Scott Disick: Anatomy of a Baby-Making Duo! 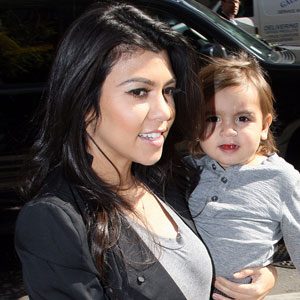 It's getting harder and harder to keep up with the Kardashians these days—in fact, it seems like only yesterday we were all oohing and aahing over the cuteness that is little Mason Disick.

But now, that bouncing baby boy is a walking, talking toddler and the family's getting ready to welcome the second child of Kourtney Kardashian and Scott Disick. So how'd this up-and-down duo get from there to here?

Dec. 14, 2009: After a tumultuous and much-chronicled courtship, Kourtney and Scott welcomed their first child, Mason Dash Disick, in Los Angeles. "A boy is definitely needed in this family!" she told E! News at the time.

February 2010: Maybe she was still hormonal or suffering from new mama exhaustion (or, you know, none of the above), but Kourtney stopped by Jimmy Kimmel Live and dropped the insult heard round the world, agreeing with the then-popular wisdom regarding her baby daddy, explaining, "'Douche' is the word that people tend to use." How, um, sweet?

Feb. 18, 2010: And for the rebuttal, Scott—coming off a wave of bad press after infamously getting drunk and smashing up his Sin City hotel room while celebrating Kim's birthday on Keeping Up With the Kardashians—spoke with Ryan Seacrest to defend himself, blaming an "emotional" Kourtney and doing nothing to mend his then-strained relationship with Kris Jenner.

Feb. 19, 2010: Makeup time! Kris and Scott make nice in an exclusive sit-down with E!: "He's the father of my grandchild; a lot's happened since then, a lot of healing," she said. Isn't it nice to play nice?

April 24, 2010: Kourtney heads to Las Vegas solo to celebrate her 31st birthday at Wet Republic. Trouble in paradise? Hardly. Scott surprised Kourtney the weekend before with a romantic trip for the two of them in Santa Barbara.

May 2010: Are those wedding bells we hear in the distance? Kourtney, Scott and Mason are spotted at a jewelry store in Calabasas, sending tongues wagging that an engagement bauble was in the offing. It wasn't.

June 25, 2010: Temper, temper. Cops are called when Scott gets into an argument with his neighbor over a parking job that escalates into quite the ruckus. There were no arrests or charges made.

July 2010: There's that fatherly instinct we were waiting for. Scott declares his adorable son Mason as "the best thing that's ever happened to me." Aww.

October 2010: Time to up sticks! Kourtney and Scott temporarily leave California behind and move to New York City.

October 2010: Yet again, Kourtney denies tabloid reports that she's expecting. And that she and Scott secretly eloped. And that he's not Mason's father. Sheesh.

November 2010: Kourtney lands her first acting gig, a cameo role on One Life to Live.

MORE: What happened on the season premiere of Kourtney & Kim's new show?

November 2010: Scary! Mason is rushed to the hospital after having a small allergic reaction to peanut butter. He was quickly released with a clean bill of health.

December 2010: Mama bear alert! Kourtney sends out a warning to paparazzi after they got a little too aggressive vying for airport shots of her and Mason.

January 2011: Kourtney resolves…not to get married this year.

February 2011: After a brief quiet spell, the tabloids are back, claiming Scott is secretly obsessed with Kourtney's sister Kim. Denials all around, naturally.

February 2011: Kourtney and Scott are still not secretly engaged, no matter how much the press wants to report otherwise.

May 2011: Add Kris Jenner to the choir of voices urging Kourtney and Scott to get hitched. Unfortunately, Kourtney still isn't biting, and publicly thanks Kim for getting engaged, since it buys her a little more time.

August 2011: Rumors swirl that Kourtney is expecting a second child, just in time to steal Kim's wedding thunder. She isn't and doesn't. Though it might not have been such a bad idea.

September 2011: Better safe than sorry! Mason is taken to the hospital for an unspecified, though not even remotely serious, boo-boo.

November 2011: Amid rampant tabloid speculation, Scott denies that he ever hooked up with Kristin Cavallari while he and Kourtney were on a break.

Nov. 27, 2011: The second season of Kourtney & Kim Take New York premieres, and it's revealed that Scott and Kourtney sleep in separate beds. More trouble? Obviously not. Scott takes to Twitter to clarify: "I'm not a good sleeper and with mason in bed I can't fall to sleep!"

Nov. 30, 2011: Guess they don't always sleep separately. Kourtney announces that she is nine weeks along, expecting her second child with Scott. "Scott and I are so excited to announce that we are expecting our second child and are thrilled to be expanding the love in our family," she told E! News exclusively. Kim is first to publicly congratulate her sister on the happy news, saying she and the family are "beyond thrilled."