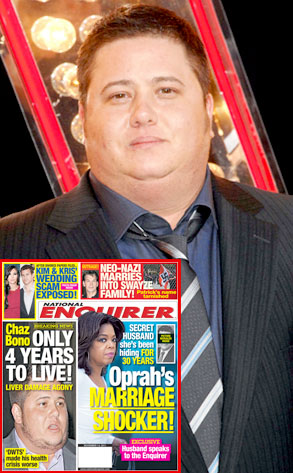 Since his sex reassignment surgery, Chaz Bono is very much alive—and plans to stay that way.

The recently booted Dancing With the Stars contestant and transgender activist is threatening to sue the National Enquirer over a cover story in its upcoming issue in which the tabloid claims he'll die within four years because of purported health issues stemming from his gender transition.

Could someone be doing the quickstep into court?

Read a copy of the letter here

Chaz's lawyer, Dina LaPolt, sent a cease and desist letter obtained by E! News to the Enquirer accusing the magazine of defamation and demanding it print a retraction and apology for a headline declaring "Chaz Bono: Only 4 Years to Live! Liver Damage Agony."

"This is absolutely outrageous, false, fabricated, and highly defamatory," the legal eagle wrote. "The salacious and inflammatory headline and article were crafted for the malicious purpose of discriminating against our client's gender and sexual orientation."

The letter then takes issue with several key assertions the article makes, including that "obesity, testosterone supplements, and high suicide rates among transgender people all increase Chaz's risk of an early death."

Hardly, notes LaPolt, who describes the statement as "outrageous" and "offensive." She also blasted the tabloid for citing as its evidence the authority of a so-called doctor, Patrick Wanis, whom the Enquirer labeled a transgender specialist, a depiction the attorney claims is "highly misleading and blatantly false."

MORE: Dancing With the Stars Haters: Beware: Cher Has Chaz Bono's Back!

"He is not a physician and has no specialty in transgender health issues," stated the attorney.

LaPolt went on to call the story "a smear campaign" and pure "character assassination."

The missive concludes by stating that if the Enquirer doesn't bow to Bono's demands within 24 hours, the reality star will take immediate legal action.

A rep for the magazine defended the piece.

"We have invited Mr. Bono and/or his medical experts to respond to the opinions of our medical experts in the next issue of the National Enquirer.  The published opinions in the current edition are mostly focused on Mr. Bono's serious weight issues, which if not addressed, could substantially shorten his life," read a statement the Enquirer's parent company, American Media Inc., gave to E! News.

"The testosterone treatments that Mr. Bono has taken are drugs that medical experts agree contain inherent risks for heart disease and liver dysfunction.  We only wish the best for Mr. Bono and hope that he embarks upon a health and diet program that includes proper nutrition and exercise for his own sake."

TAGS/ Chaz Bono , Lawsuit
GET POP CULTURED!
*Email entered incorrectly. Please try again.
By subscribing to our newsletter you agree to the Privacy Policy and Terms of Use
Daily
Weekly