Kate Middleton Chooses a Charity! Who Gets Her First Royal Patronage? 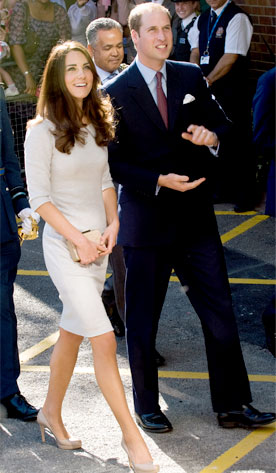 The princess perks have been rolling in for Kate Middleton since she wed her Prince Charming William earlier this year, but the duchess is about to give as good as she's gotten.

Last month, the palace confirmed that Middleton's low profile of late was both down to her lessons in how to be a good royal and to afford her some time to investigate which charitable causes she'd like to throw her substantial metaphorical weight behind. She had even already begun quietly making trips to various U.K. institutions.

And now she's made her first selection. Diana had kids. So what has Kate chosen?

Fittingly enough, Middleton has been officially named a patron of the organization set up by the princes, the aptly named Foundation of Prince William and Prince Harry. (Incidentally, that may not be its name for long, as trustees are reportedly considering a retooling of the name to more accurately reflect Kate's new leading role within the charity.)

The new title—approved by the board of trustees on Sept. 29, celebrated by the trio at an event held immediately following their charitable hospital visit last week and finally announced on the royals' official site yesterday—is something of a formality, of course, as Kate had already joined forces with the boys.

As for the foundation, which is used to raise funds that the trio then uses to support their favorite charities, it has three stated focuses: young people, the environment, and the armed forces.

"Now with The Duchess of Cambridge they intend to use the Foundation as the main vehicle for their future charitable activities and that, by raising sustainable sources of funds, it will be able to make charitable grants," the announcement read.

The foundation has also already facilitated the creation of the Prince William and Miss Catherine Middleton Charitable Gift Fund.

In any case, Middleton is now the third and likely final patron of the foundation, alongside—you guessed it—Princes William and Harry.

Meanwhile, she's already done some good for Britain—in particular, its economy—under her royal tenure, and not just for causing runs on her fashionable wares.

Kate's gorgeous Sarah Burton for Alexander McQueen wedding dress wrapped up its three months on exhibition display at Buckingham Palace Monday, and after a quick tallying of the record-breaking figures, officials said it drew the most visitors ever to the royal grounds.

All told, more than 600,000 fairy-tale-envisioning fans from all over the world came by to gawk at the gown. So what's next for this world famous garment?

Storage. In order to ensure that the dress stands the test of time, Kate is reportedly keen to limit the amount of transportation and handling of the delicate fabric.

Can't say we blame her.

TAGS/ Royals , Kate Middleton , Charity , For A Good Cause , Prince William , Prince Harry , Top Stories
GET POP CULTURED!
*Email entered incorrectly. Please try again.
By subscribing to our newsletter you agree to the Privacy Policy and Terms of Use
Daily
Weekly