The Richest Guy in Hollywood Ain't Who You Think 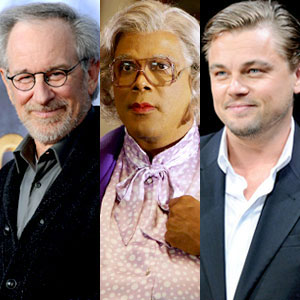 One dresses in drag as a gun-totin' granny, the other's a heartthrob and everything the third touches turns to gold. All three are among Hollywood's most successful celebrities.

So who tops the list of 11 men named to Forbes' annual list of the highest-paid men in entertainment?

MORE: Will, Tom, Drew, Denzel? Who's the Most Overpaid Star?

Coming in at No. 1  was multihyphenate Tyler Perry, who grossed a whopping $130 million between May 2010 and May 2011, the period when this survey was taken, not only from five movies he wrote, directed, produced and occasionally acted in as his alter ego Madea (see Madea Goes to Jail), but also from two television series he has on the air, Tyler Perry's House of Payne and Meet the Browns.

He returns to the big screen next in a rare appearance in a film not of his own making—playing fictional detective Alex Cross in an adaptation of James Patterson's I, Alex Cross.

For his part, actor Leonardo DiCaprio nabbed eighth place after raking in a cool $77 million from 2010's Shutter Island and Inception, both of which tallied a combined $1.1 billion in worldwide ticket sales.

Forbes mainstay Steven Spielberg meanwhile took the third spot with $107 million despite not having directed a movie since 2008's disappointing Indiana Jones and the Kingdom of the Crystal Skull.

Coming in at No. 2 behind Perry is Jerry, as in megaproducer Jerry Bruckheimer. His $113 million is largely the result of last May's stellar performance of On Stranger Tides, the fourth Pirates of the Caribbean installment, which plundered its way to $1 billion at the global box office. Add to that the hit TV shows he oversees, including the CSI franchise and The Amazing Race, and he's sitting pretty.

The famed filmmaker has two flicks in the pipeline this holiday season, the motion-capture family adventure The Adventures of Tintin and the drama War Horse, about a boy who goes searching for his horse after the latter's been pressed into the cavalry during World War I.

Elton John meanwhile rocketed to fourth place with $100 million on the strength of his latest world tour, while former American Idol judge Simon Cowell smirked his way to fifth with $90 million. After leaving Idol last year, the TV producer and judger of talent will return to the tube with a new singing competition, The X Factor, which will reunite him with fellow Idol partner Paula Abdul.

Rounding out the Forbes list was best-selling author James Patterson with $84 million; Oprah's protégé, Dr. Phil McGraw, with $80 million from his syndicated gabest; shock jock Howard Stern with $76 million from his current SiriusXM radio deal; and golfer Tiger Woods, who putted his way to $75 million despite his personal travails.