Once More, With Video! Sarah Michelle Gellar Reveals Whether Ringer Will Do a Musical Episode 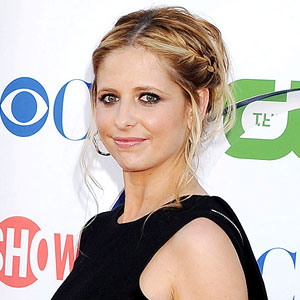 Dying to see Sarah Michelle Gellar in another musical episode on television?

The Ringer star talked with us in a co-exclusive with EW about why Buffy didn't work as a movie, the "far-reaching impact" of the show and the freedom that comes after slaying vampires for seven seasons. But most notably, she revealed which BtVS episode she was "less than thrilled" about...

MORE TV: Holy Glee Spoilers! Find Out Who Damian Is Shacking Up With, Whose Mom Is Coming and More!

Let's talk about Buffy's musical episode in season six, "Once More, With Feeling," shall we? While most fans cite "OMWF" as one of their favorite episodes ever, Gellar admits she was a bit mortified when she heard they'd be doing it.

"I do not sing," Gellar explains. "I never sold myself as a singer and I am not. I was going to let someone else do the singing, because I don't like to do something unless I can really do it. Then I read the script and realized what a huge arc it was for my character and went and made the decision that I did not have a choice. But it was the first thing I said when I said yes to doing Ringer: There will not be a musical episode."

With stars such as Gellar, Rachel Bilson, Claire Danes and Kristen Bell heading back to the small screen (holler!), it's safe to assume they think the best roles for women are currently on television.

"I think it is easier to be riskier in TV," Gellar said while speaking with EW editor Jess Cagle. "You can take the chance. I think that telling a story in a small window of a movie is tricky because you're telling a beginning, middle and end and you have to wrap it up and get everyone involved in a very short amount of time. With a TV show, you grow, you evolve, you see what everyone responds to. I think a lot of female characters need to be experienced over time because they are complicated. Looking at Buffy for example, Buffy was a movie; it didn't really work in that format. You put it on TV and you get to see the backstory and how it's affecting her and her friends and that life and that cycle, and all of a sudden, it becomes a phenomenon."

Taking a page out of Buffy 's quippy handbook, she then added, "Or maybe people who watch TV have better taste!"

Speaking of her iconic role, Gellar admits that while she was aware of how fantastic the show was, she didn't quite understand the "far-reaching impact" of Joss Whedon's work. "I loved the message we were sending, the empowerment, using the science-fiction metaphor as the horrors of high school, I understood that," she explained. "I don't think I understood the far-reaching impact until I was done, because it's a job when you're doing it. It's so much of a day-to-day thing that you can't look at it objectively. Now you hear about the colleges that teach classes on it and it's pretty mind-blowing."

Buffy Summers: She saved the world a lot and she sang for us. Siobhan Martin and Bridget Kelly, you better bring it.

TAGS/ Sarah Michelle Gellar , Buffy The Vampire Slayer , Watch With Kristin
GET POP CULTURED!
*Email entered incorrectly. Please try again.
By subscribing to our newsletter you agree to the Privacy Policy and Terms of Use
Daily
Weekly