Five Fall Shows We Love: NBC's Grimm Is Not Your Mama's Fairy-Tale Series 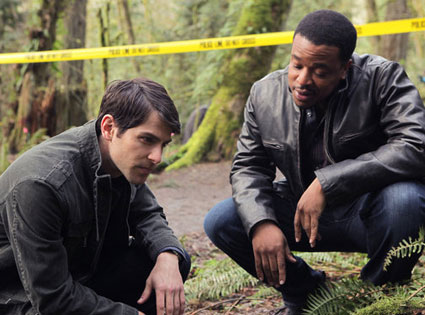 Take a former Road Ruler (no joke!). Stick him in a series about fairy tales. And make his bosses Will & Grace's Sean Hayes and one of the dudes behind Buffy and Angel. And boom! Believe it or not, you have a new fall drama with some serious potential.

So why is NBC's Grimm totally unlike that other fairy-tale series we already raved about?

For starters, it might scare the bejeezus out of you...

Five Fall Show We Love: Once Upon a Time Is Magic. Period. ﻿

"My folks used to tell me these stories," says star (and former Road Ruler!) David Giuntoli about the famous Grimm fairy tales, "which scared the hell out of me when I was a kid."

Can you blame him? Hansel and Gretel's witch captured, cooked and ate children; in Little Red Riding Hood—the subject of Grimm's pilot—a chatty wolf in drag snacks on a little girl and her sick grandmother.

Saving the world one blutbad—the German word for the mostly evil creatures (literally: bloodbath)—at a time is Portland homicide detective Nick Burckhardt (Giuntoli). That's the appealing twist of Grimm: The fantasy series is also a police procedural. And our hero is more than a cop: In the series premiere, he learns he's a descendant of supernatural hunters known as "Grimms" and has acquired their special powers and great responsibility—destroying the blutbads—upon the death of his aunt.

While the crime element is newish, Grimm's focus on the Big Bad mirrors genre shows like Supernatural, Buffy and Angel. That's no coincidence: co-creator David Greenwalt was also Buffy's EP and the co-creator (with Joss Whedon) of Angel.

Greenwalt told us this about Grimm's "big bad wolf": "Monroe is one of my favorite characters"—ours too!—"and the most human in an odd and slightly ironic sense. He could be a metaphor for an alcoholic or someone who is violent and needs to control his anger. He's been to rehab for this as you'll find out in a coming episode." The best news about Monroe? "He's going to be in every episode," the exec producer confirmed.

Rounding out the fine cast are Bitsie Tulloch, Reggie Lee and Caprica's Sasha Roiz, Nick's seemingly shady boss and another Grimm descendant. Also playing a huge role is the City of Portland, where the series is set and filmed. The city's lush scenery offers a vibrant backdrop for the monsters in its mist—especially the spectacular scarlets in the Little Red Riding Hood-themed premiere.

Dubious about Grimm's once-upon-a-crime premise? Heed these words from executive producer Jim Kouf: "Anybody who told fairy tales was a profiler for those crimes."

Verdict: Watch—or be eaten by a cannibalistic witch. Your choice.

MORE FALL TV PREVIEW: Get All the Reviews We've Done So Far

TAGS/ Grimm , 2011 Fall Tv Preview , Watch With Kristin
GET POP CULTURED!
*Email entered incorrectly. Please try again.
By subscribing to our newsletter you agree to the Privacy Policy and Terms of Use
Daily
Weekly