Minka Kelly and Derek Jeter: Anatomy of a Split 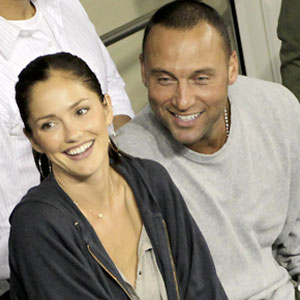 We've all heard by now, Minka Kelly is going, going, gone from Yankee shortstop Derek Jeter's life. Not to say we like it.

We really thought these two could make it for the long haul—after all, she just seems so, normal, compared to some of the women he's dated in the past. Hello 1998...Mariah Carey?

Plus, she's down-to-earth and successful and he's a gifted athlete who's always professional, so they just seemed like the perfect match. Sigh.

Well, anyway, there are no cheating rumors (as of now), no bitter words, no nasty public battle going down between these two. So what exactly did happen between the former lovebirds?

Here's a timeline of their romance and things seem to have just ended so abruptly. Perhaps the Charlie's Angel star, 31, gave her man, 37, a marriage ultimatum? See for yourselves...

September 2007: Minka is spotted in New York City out on a date with John Mayer and it's discovered the duo are dating on the regular. Jeter has meanwhile just broken up with Jessica Biel, whom he was spotted with on a beach in Puerto Rico in early 2007 before they split.

December 2007: Minka and Mayer call it quits after quietly dating for a few months.

March 2008: Minka gives an interview to Men's Health possibly foreshadowing what may have gone wrong with her and her baseball honey. "A man has to be passionate about something," she told the mag. "He has to be focused and genuine. He has to have drive. I really believe that about our careers are our first loves. And I think a career should be as important for him as it is for me. And that we should be able to understand that we come second." Oops.

May 2008: There are whispers Minka and the Yankee are hooking up, but the duo have not yet gone public.

October 2008: Minka and Derek are spotted leaving a Texas Longhorns game together in Austin, where the gorgeous actress was filming Friday Night Lights. Oh, it's on.

October 2008: The normally reserved Jeter admits to SI.com that he watches Friday Night Lights and thinks it is a "great show," but laughs when asked if he and Minka are in fact together.

November 6, 2009: Things appear to have turned very serious for the couple when Minka appears on Derek's Yankee float at the World Series ticker tape parade in New York City. Wrapped in a peacoat, jeans, a hoodie and a Yankees hat, the beauty stood behind her man as he waved to the crowds and smiled. This is a very, very big deal in Derek Jeter lady news.

November 19, 2009: The shots seen round the world are released. The hot couple hit St. Barts in bathing suits, where they frolick and kiss and play in the water like lovebirds. And just prior to the trip, after the Yankees won the World Series, Minka had accompanied Derek to 1Oak in New York to party with him and his teammates.

January 11, 2010: The New York Post has the duo set to play ball! The paper reports they will marry in November of 2010 at the Oheka Castle in New York, the same spot where Kevin Jonas tied the knot. "We never comment on any clients or guests at Oheka," Rick Bellando, wedding sales manager, had told E! News at the time. However, he admits the venue was booked solid for the fall weekend in question, although obviously it wasn't for these two kids.

MORE: What's up with Will and Jada?

October 2010: Esquire names Minka the Sexiest Woman Alive and she mentions Jeter in the interview, saying he finds her to be polite and considerate.

January 2011: After Minka showing up to many, many Yankee games, Derek returns the favor by hitting the Los Angeles premiere of The Roommate, which stars his girlfriend, but does not walk the red carpet and instead sneaks inside to sit and watch the film. Either way, he showed it's not all Derek, all the time.

February 2011: Minka hints at some relationship unrest, giving an interview to GQ in which she says she was not getting married—not in the immediate future, anyway. "I promise you, I'm not getting married in the next month," she told the mag. Uh-oh.

July 9, 2011: Minka and Derek still appear to be solid as she gets emotional at Yankee Stadium when Derek smacks his 3,000th hit out of the park, becoming the 28th player to do so in major league history. She clapped and cheered alongside his family and friends in a luxury box as she watched the homerun soar out of the stadium.

July 12, 2011: Derek skips the All-Star game in favor of Minka and the two are spotted laughing and strolling together in South Beach.

July 28, 2011: The documentary on Derek Jeter's quest for 3,000, Derek Jeter 3K, premieres on HBO and Minka makes a surprise appearance in it, saying when she met the Yankee captain she didn't know anything about baseball. Jeter joked that his galpal was lying and that she "had a poster of me on her wall when she was in high school."

August 26, 2011: In the span of a month, the two have gone from solid to kaput. Jeter and Minka strike out on long-term love and it's annouced they've broken up.

TAGS/ Top Stories , Love And Sex , Breakups , Minka Kelly , Sports
GET POP CULTURED!
*Email entered incorrectly. Please try again.
By subscribing to our newsletter you agree to the Privacy Policy and Terms of Use
Daily
Weekly