Teen Mom's original fab four are back to remind us that getting knocked up in high school can make life so hard.

But young mothers Amber, Maci, Catelynn and Farrah are coping the best they can with their limited resources. Only one mom is tired of padding her budget (and something else) and is making an investment in her and her baby's future.

Let's C see what the girls have been up to, shall we?

MORE: Which Teen Mom Star Is the Best Mother?

Farrah, for one, has been working her butt off. "Culinary school, waitressing and modeling," she boasts in her best MTV-script monotone. [What about author?! Come on, Farrah, don't let us down—we've already preordered 2011's "most eagerly anticipated book" on Amazon.] After reminding us that "being a good mother is a full-time job too," Farrah says she's "ready to make a big change." 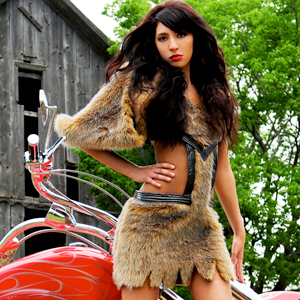 What could it be? College? Er, OK, how about romance? No, the answer for this struggling young mom is, obviously, a boob job! And because she's doing this all for baby Sophia, Farrah applies for a loan to cover the procedure instead of dipping into her savings account. After being repeatedly rejected, MTV a bank comes through with the funding.

Farrah's response on her medical forms—"Here for Boobs"—says so much, and in fact we've already ordered the supplies for a cross-stitch of this very message to frame on our wall. Meanwhile Farrah's mom is "here for Sophia," persuading her daughter to write a will designating her as the girl's legal guardian in case she dies during surgery. (Hey, it happens.)

Know this: Farrah may leave the plastic surgeon with a positive boob-to-butt ratio and a "C you can see," but it hurts. See, MTV is not glamorizing plastic surgery for young women, no sir. 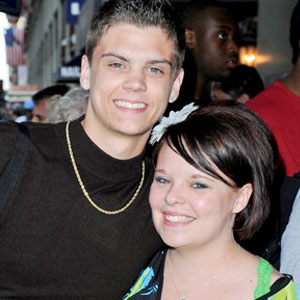 Some other Teen Mom boobs saw the spotlight in tonight's episode: Maci's baby daddy, Ryan Edwards, for example. And although Ryan is paying child support (from his unemployment check, yo), he had a lot of nerve asking if Maci's employed, independent boyfriend Kyle is "slow"...from his mommy's porch. Where the 22-year-old father of Bentley lives, rent free.

Trying not to be a boob is Tyler Baltierra—Catelynn's baby daddy/fiancé/stepbrother—who calls himself a "loser" because he's "18 years old living at [his] mom's house. I don't even do my own laundry."

Both Tyler and Catelynn are ready to make a big change—so where's the plastic surgeon? Hold up: Instead of going under the knife, Carly's sensible birth parents are planning to get an apartment together. While we hate to see Tyler leave the nest, Catelynn's escape from her mullet-lovin' mama can't happen soon enough. Rent and utilities are expensive, sure, but seeing as how these kids aren't going to be cruising the college campus anytime soon (What? You saw their report cards), maybe they can borrow a little from their Jezebel college fund?

A high school degree, sadly, is the least of Amber's worries this season. Her segments are almost unwatchable for two reasons: (1) knowing she's in rehab now after an alleged suicide attempt and (2) Gary Shirley. What is the appeal? If Amber doesn't reciprocate cute Chris' love, then can't she at least find someone who is, say, cute? Debate is pointless—we know how this story ends: The pig stays in the picture. Meanwhile we have to suffer through Amber's arrest, separation from her daughter, Leah, more violence—and more Gary.

TAGS/ Teen Mom , TV , Recaps
GET POP CULTURED!
*Email entered incorrectly. Please try again.
By subscribing to our newsletter you agree to the Privacy Policy and Terms of Use
Daily
Weekly