Oprah Winfrey Says Goodbye and Thank You for 25 Years of Oprah, "The Great Love of My Life"

After 25 years spent burrowing into the public consciousness, the final episode of The Oprah Winfrey Show aired this morning, leaving a massive hole not only in the daytime programming schedule, but in the hearts of generations of women. And, OK, a couple men, too.

If you haven't yet, now would be a good time to grab a box of tissues.

While much speculation was made about what Oprah's final syndicated hour would entail (lest we forget, she still has OWN), in the end it was the only thing it could have been: an hour of Oprah. And Oprah alone.

"There are no words to match this moment," she told the audience, which included Stedman Graham, Gayle King, Tyler Perry and her oft-cited hero, her fourth grade teacher Mrs. Duncan.

But for an hour, she did everything she could to find them. Standing alone onstage, the show was equal parts lecture, motivational speech, thank you and farewell.

"It is no coincidence that I always wanted to be a teacher, and I ended up in the world's biggest classroom," she said at the start of the show. "And this, my friends, will be our last class on this stage.

"Today there will be no guests, there will be no makeovers or surprises…You will not be getting a car or a tree. This last hour is really about me saying thank you. It is my love letter to you. I want to leave you all with the lessons that have been the anchor for my life and the ones that I hold most precious.

"Every day that I stood here, I knew that this was exactly where I was supposed to be."

True, as always, to her word, Winfrey spent the hour imparting her biggest life lessons and most treasured moments from the past 25 years, both from the show and her personal life, though her biggest and most lasting message of all—as it has been this past quarter-century—was the empowerment of her audience.

"It has been a privilege for me to speak to you here. You let me into your homes to talk to you everyday. This is what you allowed me to do, and I thank you for that. But what I want you to know is each of you has your own platform. Do not let the trappings here fool you. Mine is a stage on a studio. Wherever you are, that is your platform, your stage, your circle of influence. That is your talk show and that is where your power lies.

"Everybody has a calling, mine aligned with my profession, my job. Not everybody gets paid for it, but everybody gets called…My great wish for all of you who've allowed me to honor my calling is you carry whatever you're supposed to be doing forward. Don't waste anymore time. Use your light to serve the world."

Of course, it wasn't all so heavy. There were ample (and often suitably embarrassing) trips down memory lane.

"You all encouraged me and cheered me on and occasionally complained about my outfits," she joked, as photos and clips from the past two and a half decades ran. "My big hair and earrings the size of napkins. I now see you had every reason to, but at the time you couldn't tell me nothing."

Oprah, who in her 25 years on air has interviewed approximately 30,000 guests and never—never—once missed a day of work, said that she knew early on that the show was more than just her vocation.

"I started the show as a job but it was not long before I understood that there was something more going on here. It was more than a job. Something in me connected with each of you in a way that allowed me to see myself in you and you in me. I listened and grew….sometimes I was a teacher and sometimes you taught me."

She encouraged her viewers to find the same passion that she had and to answer their own personal calling as she had been so honored to be able to do.

"For every action, there is an equal and opposite reaction, that is the law that I live by." Bet you weren't expecting a shout-out to Newton's third law in the finale, were you?

"Don't wait for anyone else to fix you, save you or complete you," she went on. "Jerry Maguire was just a movie."

Oprah also dedicated a large portion of the show to the notion of unworthiness, the source of many of her and her guests' aha moments over the years.

"The show has taught me that there is a common thread that runs through all of our pain and all of our suffering, and that is unworthiness," she said. "There is a difference between thinking you deserve to be happy and knowing you are worthy of happiness. The show's taught me you're worthy because you are born and because you are here. Your being alive makes worthiness your birth right. You alone are enough."

The Oprah-isms kept flowing, and Winfrey discussed what she has always believed to be the secret to her success. 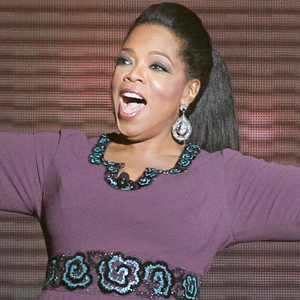 "I non-jokingly say, 'My team and Jesus,'" she said of her standby answer to the question over the years. "Because nothing but the hand of God has made this possible for me.

"It's closer than your breath and it is yours for the asking. How do I know this? That one little sperm of Vernon Winfrey hitting the egg of Vernita Lee in that one time they were together…under the trees in Mississippi…and out pops me!"

Woven throughout her hour of memories and lessons was an overarching and overflowing gratitude for her viewers.

While it was obviously an emotional show for Oprah, she only began to crack late in the episode, when discussing her surprising life journey.

"I know that there are no coincidences, only divine order…but I'm truly amazed that I…could end up here," she said, as tears began to form.

"From you whose names I will never know, I learned what love is. You and this show have been the great love of my life."

In wrapping up the hour, Oprah said, "To be embraced by all of you who watched is one of the greatest honors any human being can have."

She denied that ending her show after 25 years was at all bittersweet.

"I say all sweet, no bitter," she said. "Here's why: many of us have been together for 25 years. We have hooted and hollered together, had our aha moments, ugly cried together and did our gratitude journals.

"I thank you all for your support and trust in me. I thank you for sharing this yellow brick road of blessings…Thank you for being as sweet an inspiration to me as I was to you." And that paved the way for her final touching words:

"I won't say goodbye, I'll just say, until we meet again. To God be the glory."

Thank you, Oprah, for 25 great years.

TAGS/ Top Stories , Oprah Winfrey , The Oprah Winfrey Show , TV ,
GET POP CULTURED!
*Email entered incorrectly. Please try again.
By subscribing to our newsletter you agree to the Privacy Policy and Terms of Use
Daily
Weekly