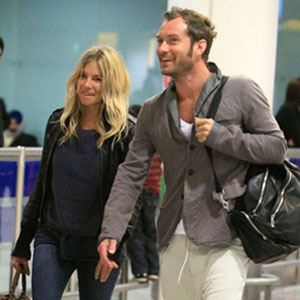 UPDATE: News of the World has issued a statement apologizing to Miller. "Past behavior at the News of the World in relation to voicemail interception is a matter of genuine regret," the statement read. "It is now apparent that our previous inquiries failed to uncover important evidence and we acknowledge our actions then were not sufficiently robust."

Here's a news flash: Mess with Sienna Miller and expect to pay up big-time.

The British thesp won a decisive court judgment against News of the World that will see the Rupert Murdoch-owned tabloid pay her a whopping $162,000 in damages after it accepted all liability for hacking into her phone for scoops on her private life.

So is Sienna satisfied?

According to U.K. reports, as part of admitting its central role in the spying scandal, News of the World will provide Team Miller with a full accounting of the wiretapping that took place between 2004 and 2005. That was when several of of the newspaper's reporters, three of whom have since been jailed, gained illegal access to the actress's private voicemails in an effort to dig up dirt on her relationship with then-beau Jude Law.

The agreement was reached Thursday after two days of hearings in London's High Court, and a judge is expected to sign off on it next week.

"We are pleased that we have managed to bring this case to a satisfactory conclusion," read a statement from News of the World. "Several weeks ago we admitted liability in certain cases and offered a genuine and unreserved apology. We hope to resolve other cases swiftly."

Lawyers for the paper then went on to clarify the nature of the material that it's agreed to disclose to Miller's camp.

"For the record, reports that have been ordered to disclose 8,000 emails to Ms. Miller are inaccurate," continued the statement. "The error stems from a reference in court to the fact that a total of 8,000 e-mails were being searched to ascertain whether any Sienna Miller-related material was amongst them."

Miller's case is just the tip of the iceberg in a scandal that was first exposed by Scotland Yard in 2006 when it learned that the paper's editor, working with a private investigator, illegally accessed cell phone voicemails belonging to certain aides to the royal family.

It soon became apparent that the hacking was more widespread. Miller was among a slew of public figures out of a total of—and we're not making this up—91 people, some of whom were fellow celebrities and politicians, targeted by News of the World. Four other purported victims have since settled with Murdoch's media empire, including one celebrity flack who accepted a $1.6 million payout.

Miller's attorney, Hugh Tomlinson, was quoted by the BBC as telling the court yesterday his client didn't care about the money (she initially demanded $650,000 in compensation) as much as knowing "the extent of wrongdoing."

"In those circumstances, her primary concern is not how much money is awarded by way of compensation but to know exactly what the extent was of the hacking which took place," he said.

News of the World's legal eagle, Michael Silverleaf, countered that Miller—who's probably more famous for her tumultuous affair with Law than her big-screen resume (G.I. Joe anybody?) —did not sustain "any long-term harm."

"The complainant's carer, reputation or life has not been affected in the long term," he said.

Either way, with yesterday's admission of responsibility taking care of just one of 24 invasion of privacy suits and counting filed against it, including legal action from Law and English footballer Ashley Cole (ex-hubby of Cheryl Cole), the tabloid's lawyers have their work cut out for them.

Update May 20, 2011: Jude Law named as one of four people who will be test cases in lawsuits being brought against News of the World for the phone-hacking scheme. Should one of the four drop out, British comic Steve Coogan is among the celebrities on a secondary list itching to sue the Rupert Murdoch-owned tabloid.

TAGS/ , Sienna Miller , Lawsuit , Legal
GET POP CULTURED!
*Email entered incorrectly. Please try again.
By subscribing to our newsletter you agree to the Privacy Policy and Terms of Use
Daily
Weekly