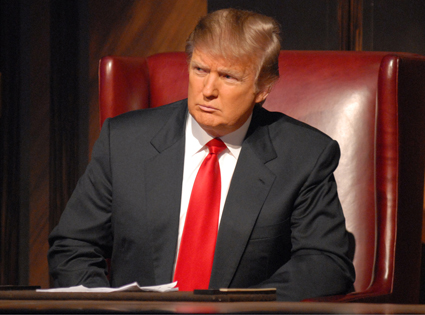 So how do you come back from such a politically-acute, humorously layered and intelligently thought-out public evisceration? Well, if you're the Donald, you reach into the vast recesses of your wit and, with an eye to your would-be presidential campaign, take on a professional comedian (with a weekly platform, no less) and call him a stutterer.

MORE: Believe it or not, Lady Gaga can probably relate

Anyone who caught the C-SPAN broadcast (or, more likely, online video) of the political gagfest would have noticed that Trump was most definitely not amused by the string of one-liners directed his way, and, of course, let the curious press know as much after the event.

On Sunday morning, Trump briefly phoned in to Fox & Friends to give his assessment of the night. In addition to lapsing into a nonsensical argument criticizing those in attendance (um, that includes himself, presumably) for "having a good time" while  "I don't think the American people are having a good time with $5 gas and clothing prices doubling," he turned his attentions to the main entertainment.

"I thought Seth Meyers—his delivery, frankly, was not good," Trump said. "He's a stutterer and he really was having a hard time."

Except that he isn't. And because he isn't, the label isn't so much an accurate description as an offensive, un-P.C. and frankly in this post-King's Speech world, antiquated, slur.

"Shame on you, Mr. Trump!" Jane Fraser, president of the Stuttering Foundation, said today in response to the word's insulting context. "We at the Stuttering Foundation find it discouraging that in 2011, Donald Trump has chosen to use the word 'stutterer' in a derogatory fashion, something to be made fun of, to describe Seth Meyers' speech at the annual White House Correspondents' Dinner.

"In light of The King's Speech and the new awareness it has brought to stuttering, we had hoped that this kind of unfortunate comment was a thing of the past. When in doubt about the eloquence of those who stutter, Trump should take a look at Winston Churchill, King George VI and James Earl Jones."

Trump has yet to respond to the criticism of his rhetoric, though those offended shouldn't hold their breath for an apology.

Perhaps sensing fallout from his weekend exploits, desiring to stay out of the press for a couple days (bad luck) or out of sincere respect, he seemingly vowed to keep his trap shut for a little while.

And, more surprisingly, offered a compliment to our commander in chief.

"I want to personally congratulate President Obama and the men women of the Armed Forces for a job very well done," he tweeted this morning. "I am so proud to see Americans standing shoulder to shoulder, waving the American flag in celebration of this great victory.

"We should spend the next several days not debating party politics, but in remembrance of those who lost their lives on 9/11 and those fighting for our freedom. God Bless America."

There now. Finally the Donald said something that we can all agree on.

VIDEO: One thing's for certain: Trump won't be making any apologies on David Letterman's show