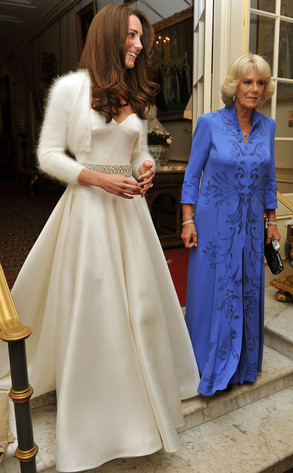 They did. Now they dance.

After taking a much-needed break from their oh-so-public big day, Prince William and Kate Middleton—or the Duke and Duchess of Cambridge, as they're now so known—finally emerged from St. James Palace relaxed, recharged and, most importantly as far as we're concerned, redressed, debuting their second (for Kate) and third (believe it or not, for Wills) new outfits of the day.

The couple, flanked by Prince Charles, Camilla Parker Bowles, Prince Harry and a few other members of the royal wedding party, were making their way back to Buckingham Palace for the second, far more intimate and laid-back of their receptions.

So what, oh what, did Kate (and hot sister Pippa and mother of the bride Carole) wear this time around?

Listen. When something works, you stick with it. Which is why it's not exactly surprising that Kate once again chose to step out in a Sarah Burton-designed Alexander McQueen creation.

This time around, she once again chose to wear an all-white outfit, and worked a strapless satin gazar evening dress with a circle skirt and diamante embroidered detail around the waist. She topped it off with a white angora bolero cardigan.

Kate's hairdo also went through a subtle change for the nighttime reception—gone was the demi-chignon half updo (and the diamond tiara) and in its stead was Kate in her most natural state—with free-flowing loose curls.

As for the boys, William, Harry and Charles each wore classic dinner jackets with basic black bowties, while Camilla opted for a light blue hand-embroidered, high-collared floor length Anna Valentine dress. Caftan chic at its finest, we say.

The Middleton family also made their way over to Buckingham Palace for the evening reception, albeit traveling from the Goring Hotel, not from Clarence House. They, too, had changed attire, with Pippa Middleton opting to wear her hair up this time around (actually, she seems to have opted for Kate's wedding style), along with custom Temperley London design: a long emerald green sleeveless dress with plunging neckline and jeweled embellishment. Mother Carole donned a black cap sleeve dress with a tiered skirt, and the Middleton men—brother James and father Michael—stuck with the traditional black tuxes and bow ties.

Tonight's reception, which was scheduled to begin at 7:30 p.m. London time (and for which the royal party left just minutes before), will be a much more relaxed party for the couple. Dinner and dancing are expected to take place, as a dance floor has been constructed specially for the occasion.

Helping relieve a bit of the stress for the guests is the fact that the queen will not be in attendance at this reception. So we're guessing any lingering toasts (and there are expected to be quite a few) will lean to the slightly more bawdy side of things. While both Prince Charles and Harry spoke of William at the earlier, 650-strong reception this afternoon, Harry's official best man speech is expected to be given tonight. So here's hoping William brought a hat.

The reception is expected to last well into the night, and will take place primarily in the grand ballroom of Buckingham Palace. However, guests will also be allowed to mingle in the opened-up white drawing room, music room, blue drawing room, state dining room and picture gallery of the palace.

Incidentally, Kate and Will's departure from St. James Palace marks their last public appearance of the day, as they will spend their first night as a married couple together at Buckingham Palace.

Though they might not make it to bed until the early morning hours. While the day has no doubt already proven a long one for the excited newlyweds, a third reception (or the second leg of the second reception, depending on how you look at it) will continue on as some of the, ahem, elder members of the party retire for the evening.

Some of the more, let's say festive-loving, members of Wills' social circle will be present at tonight's reception and aren't likely to be too eager to call it an early night, among them nightclub owner (and reputed bachelor party co-organizer) Guy Pelly and Thomas van Straubenzee, both of whom are rumored to have been involved in the so-called "wedmin" of the event.

Not to mention, Harry apparently has some big plans for tomorrow morning's breakfast, planning a 6 a.m. greasy feast for those wedding survivors who put in an all-nighter. There's still no word on when (or where!) Will and Kate will depart on their honeymoon, though they could (and indeed are expected to) leave as early as tomorrow. 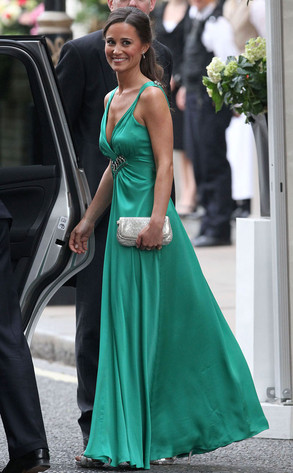 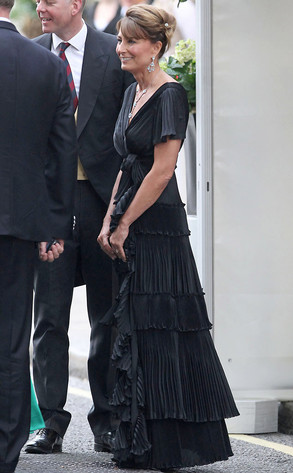 PHOTOS: See how it all began in our Wills & Kate: A Royal Romance gallery!