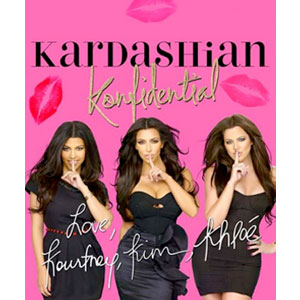 Reality show? Check. Jewelry and perfume lines? Check. Modeling gigs, stores, marriage, a baby? Yup. Damn, it is hard to keep up with this family. All that's left is a book. Well, now they've got that covered too.

E!'s Kardashian trifecta of Kourtney, Kim and Khloé is spilling everything in the just-released triple-authored "sisterhood autobiography" called Kardashian Konfidential.

And, yes, it's hot pink and gold with lipstick stamps all over it.

We've gotten a hold of the book and can tell you it makes for some juicy holiday reading. What secret scandals (there are some left!) did we learn about the sisters? We'll tell you…

1. The now happily married Khloé Kardashian Odom lost her virginity at 14: Long before Lamar, the youngest of the three used to steal stepfather Bruce Jenner's car and drive to secret sex sessions with an older boyfriend.

Now 26, Khloé reveals that back then she lied about her age to her elder guy, but dishes out some wise advice in the book. "You should never, ever have sex when you're that young," she writes. "Feeling rushed and pressured and unsure should have been my clue that I wasn't ready to take that step."

2. Kourtney's a borderline OCDer: The oldest sibling says she needs her fridge "perfect." Her glasses and dishes "perfectly lined up." Nothing can be out of order. She also "has to have" pink dish gloves. She worships cleanliness so much, she says she needs all the same style of hanger and forces baby daddy Scott Disick to do the same. She folds and hangs her clothing in color order, groups of blacks, grays and neutrals. Kourtney says it all stems from her dad, famed lawyer Robert Kardashian, who was the same way. "My dad was very organized, is not like that at all. Why wouldn't you have them [your clothes] lined up according to colors? I don't get it. Mason will definitely know better."

3. They dish on O.J. SImpson and how their family was involved: Although brushing over the infamous 1994 murder case case in the book, the sisters do reveal one interesting tidbit. While we knew that dad Robert, close with the former footballer since their college days, was a member of Simpson's Dream Team, we didn't realize that the infamous white Bronco slow-speed chase actually started at the Kardashian home.

4. Kim almost fainted when she met J.Lo. Oh, and J.Lo's the one who made Kim love her big booty. Kim writes that even though she's got fans, she's still one herself. "I really, really like J.Lo," she confesses. "I identify with her curves and she made me think it was sexy to have a big booty."

Kim notes she was so obsessed with the singer, she practically fainted when they finally met at a valet stand at the Beverly Hills Hotel.

"I see her walking towards the valet and I was literally shaking. I said 'I'm going to faint, Jennifer Lopez is right there,' " writes Kim. "I was too nervous, what if she turned out different? She couldnt have been nicer."

Kim says that the two have gotten to know each other and that J.Lo's been very supportive of her career. "She's been so amazing to me."

5. Kim's secretly into her many copycats: We knew she loved herself, but who knew she loved all her lookalikes, too? Kim says although she's now a celeb, she still loves to get out of VIP and mingle with the little people. "I like to go out in the crowd and take pics," she says of the girls who are dressed in her style. She says she gets "excited" to see them and doesn't want to let the fame ever get to her head.

"I like being myself, I don't want to be unapproachable," she says.

Check out the Kardashian sisters dishing on celeb style!