Danielle Staub's Ex-Husband Believes "She Will Get Murdered" 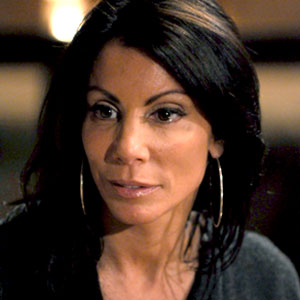 So what do you really think, Kevin Maher?

"Danielle Staub has plenty of things to be ashamed of. She has no conscience," the New Jersey Housewife's litigious ex-husband said Friday in an exclusive sit-down with E! News, adding that he firmly believes Staub's past association with a Colombian drug cartel will come back to haunt her, in spades.

"It's not safe being around her," he said. "She's a very dangerous woman. I am of the belief that she will get murdered."

But first, Maher wants his day in court.

"I am so looking forward to Oct. 5, which will be the worst day in Danielle Staub's life," her ex continued, referring to her upcoming deposition in the defamation lawsuit Maher filed last year in response to accusations she made on The Real Housewives of New Jersey that he raped her "on a bed of broken glass" and did other abusive things.

"It was a horrific thing being called a rapist," Maher said. "She did that in a calculating, diabolical way to hurt me...It would be the worse day in any pathological liar's life when they are sat down and they have to raise their hand and swear to god that the things they are about to say are the truth."

Maher had said before that he couldn't wait to get Staub on the hot seat, saying he's got enough dirt on his former missus to prove she's a pathological liar.

For the record, Staub's rep had no comment on Maher's latest bit of invective.

In her recent tell-all, The Naked Truth, Staub admitted to being a call girl once upon a time but denied being a prostitute. Her attorney filed a motion Tuesday asking the judge to exclude from evidence any references to her being in a sex tape, being promiscuous, being a stripper or being a prostitute.

"I would be shocked if the judge suppressed her background," Maher said. "She's been living a life of lies. She told her two beautiful daughters a fairytale about who she was—a supermodel."

But a potential murder victim?

"The Medellin drug cartel did not forget what she did," Maher said, "and they are outraged that she had the nerve to go on national television, flaunt her wealth. And basically, what she's saying when she did that is, ‘It's OK, everyone that is thinking of flipping on the Medellin drug cartel, just look at me. I'm living the good life here. I have my own television show. They didn't touch me.'

"I think that sends a dangerous signal to everyone who is thinking about informing on the drug cartel or turning them in.

And to think, Law & Order was canceled before this beaut could make it on the air.

So real it's unreal. Let's escape to the Big Picture gallery.

TAGS/ Top Stories , , Feuds , Reality TV , The Real Housewives Of New Jersey , Legal
GET POP CULTURED!
*Email entered incorrectly. Please try again.
By subscribing to our newsletter you agree to the Privacy Policy and Terms of Use
Daily
Weekly