Is Leo DiCaprio Behind a Major "Cover-Up"? 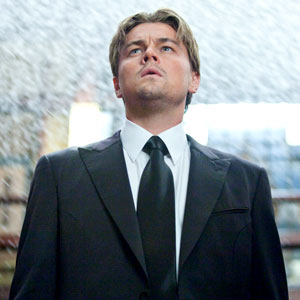 We knew Leonardo DiCaprio was King of the World. But who had any idea he was capable of orchestrating a massive "cover-up" involving police, prosecutors and Canadian officials?

The attorney for Aretha Wilson, the Canadian woman accused of slashing DiCaprio's beautiful face with a broken beer bottle at a Hollywood bash five years ago is now breaking out a theory that somehow blames the Inception star for the attack that sent him to the hospital.

Freddy Sayegh tells E! News that it was DiCaprio who instigated the confrontation—after some mouthing off by his client that is.

The attorney says that Wilson called DiCaprio and his entourage "a bunch of fags" and mocked them as they were leaving by saying why don't they 'follow the little white man." That ticked off DiCaprio, Sayegh claims, and he came over and supposedly took a swing at Wilson, forcing her to defend her self with the broken glass from the bottle—leaving a gash that took 12 stitches to close.

Sayegh somehow finds it suspicious that DiCaprio didn't report the attack for three days, and instead of going to the police himsef, he dispatched attorney Blair Berk. Also, Sayegh suggests that five eyewitnesses presented confliciting versions of what happened, and the whole thing has become "a cover up."

"All of this is going come out. Each one of the statements are conflictng because each was taken on different days without each other," he said. "The only people they got statements from are his best friends."

Wilson has pleaded not guilty to one count of felony assault with a deadly weapon, five years after the incident took place and only after she had to extradited from her native Toronto where she was serving time for a similar incident.

Despite the actor's previous claim that he's never met his attacker and that she snuck into the party that night, Sayegh asserted Wilson was indeed invited, and that she and DiCaprio were really friends. After all, "she's been to his home...met his mother" and "they've had many outings."

And what does Team DiCaprio have to say about the "cover-up" theory?

That's the word from his attorney Berk, who tells E! News that Sayegh's theory is an act of desperation.

"Leonardo DiCaprio has fully cooperated with prosecutors on this case for over five years. It is outrageous that this woman—who has a long and violent history and became a fugitive to avoid standing trial in the United States when she assaulted my client five years ago—is now making up lies to further avoid responsibility in this matter," she said.

"This is a classic example of the victim of a violent crime becoming the victim once again."

While Wilson's attorney didn't bother raising his proposed cover-up defense at today's court hearing—offering it up instead for the media—he did ask the judge for a toxicology report on DiCaprio as well as his medical records from that night.

Jane Robison, a spokeswoman for the Los Angeles County District Attorney's Office, say that no such toxicology report exists as victims in cases like this aren't normally asked to submit to such tests.

The judge agreed. The next hearing date has been set for Thursday.

Despite the setback—no to mention the lashing by Berk—Sayegh was unyielding: "I'm not trying to throw the blame on him, but in reality we will win this case."

Good luck with that.

Is a cameo in our Court Appearances gallery in Leo's future?

TAGS/ Top Stories , , Leonardo DiCaprio , Legal
GET POP CULTURED!
*Email entered incorrectly. Please try again.
By subscribing to our newsletter you agree to the Privacy Policy and Terms of Use
Daily
Weekly