Cougar Town Boss Vows "Friends" Will Come on the Show 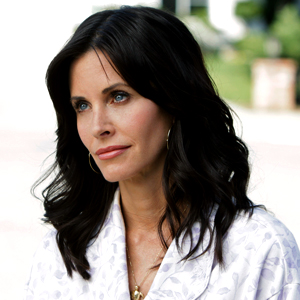 Forget that little ol' Friend of Courteney Cox we've been hearing so much about—beyond brilliant show runner Bill Lawrence has an even better Cougar Town guest star in mind.

Actually, he's got five! And if you're still a megafan of that other bit of TV magic Bill created back in the day (ahem, Scrubs!), this casting scoop will cause loads of woo-hooing, jumping high-fives and maybe even a fit of glee. Don't say we didn't warn ya... 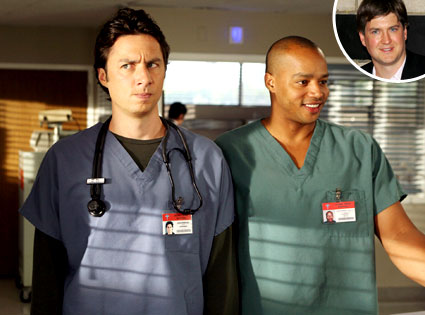 J.D., Turk, Elliot, Carla and Dr. Cox are coming to Florida...well, kinda. Just not in that order. And not all of them. But some for sure!

"I promise you either Sarah Chalke, Zach Braff, John C. McGinley, Donald Faison or Judy Reyes will be on the show this year," Bill tells us of his favorite Scrubsers infiltrating the Cougar crew's second season.

Sadly, The Janitor is out of the equation because, as Bill puts it: "It can't be Neil Flynn because he betrayed me and took another job on the same network," referring, of course, to The Middle. The nerve!

But hey, we'll take what we can get—and so will Bill! "I would kill for them to [guest star]." he adds. "[And] I guarantee you at least one of those guys."

The show runner extraordinaire tells us he wouldn't be against an onscreen reunion between John and Christa Miller (Scrubs supercouple Perry & Jordan), saying: "I think enough time has passed that they're not husband and wife anymore."

Bill's also got a thang for hiring "within the family," as he puts it—which means get ready for more Scott Foley and, as we first reported last week, Ryan Devlin on Cougar Town, too!

"We call it the Friends of the Family policy," Bill tells us, "which is, I generally only bring on guest stars that are my friends or friends of the other actors or the crew so that we all know what they're like."

Just call 'em the Bill Lawrence Players. And Busy Phillips (Laurie) is for it.

"Bill has been doing this for so long and is so good at what he does," she gushes, "And he knows that when you have people who have worked together before, you don't have to wait for any chemistry to build. He came to all of us and said, 'If there any friends you'd like to get on the show, I'll be coming and asking you about casting,' and he really does. Everybody always wants to know if one of the Friends are going to be on the show, but truthfully, it's exciting to get everybody's friends involved!"

So really, the only thing left to say is: How the heck do we become part of the Friends of the Family gang?! C'mon, Bill, you know we love ya. Let's make this thing happen.

Are you excited about a Scrubs reunion on Cougar Town? Which star would you be most excited to see? Play the guessing game in the comments below and fill us in on your pick!

TAGS/ Watch With Kristin , Cougar Town
GET POP CULTURED!
*Email entered incorrectly. Please try again.
By subscribing to our newsletter you agree to the Privacy Policy and Terms of Use
Daily
Weekly