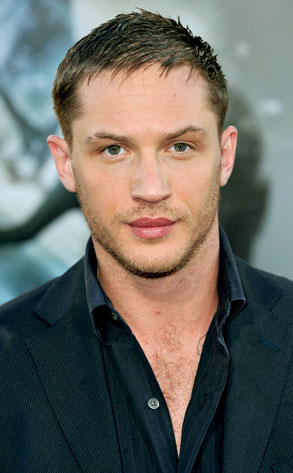 Last week, a source close to the talented Inception star Tom Hardy dished to us about his recent "I've had sexual relations with men" quotes in the Daily Mail, and how they were "taken out of context" when he was discussing playing a gay role.

Maybe there's some truth to that claim, after all?

We did a little digging around and found that the alleged interview was more than taken out of context—it was taken from an interview Hardy did two years ago:

The Daily Mail was rehashing a 2008 article in Now magazine, which claimed to have interviewed Hardy where dropped the bisexual bomb. But Now totally ripped off Attitude magazine's 2008 cover story with Tom back when he was promoting RocknRolla. You following?

Hardey was on the December '08 cover of Attitude, the UK's best-selling gay magazine, where he talked about playing Handsome Bob, a gay mobster in Guy Richie's flick.

Here are the actual questions and full answers from the two-year-old interview:

It's such a tradition of London gangsters, the gay thing, what with the Krays...

I wouldn't like to say. I really wouldn't. It's an unsaid, un-talked about thing. The military get it as well. Sexual relations with men in situations where it's a necessity, like prison, are different from being homosexual.

Have you ever had any sexual relations with men?

As a boy? Of course I have. I'm an actor for *beep*'s sake. I'm an artist. I've played with everything and everyone. But I'm not into men sexually. I love the form and the physicality but the gay sex bit does nothing for me. In the same way as a wet vagina would turn someone else into a lemon-sucking freak. To me it just doesn't compute now I'm into my 30s and it doesn't do it for me and I'm done experimenting.

Have you done it all?

Not all but I can imagine. We've all got an *beep* and I can imagine. It just doesn't do it for me, sex with another man. But there's plenty of stuff in a relationship with another man, especially gay men, that I need in my life. A lot of gay men get my thing for shoes. I don't think I'm metrosexual but I'm definitely my mother's son. I have definite feminine qualities and a lot of gay men are incredibly masculine.

So what say you Awful Truth'ers? Does the interview change the way you feel at all?

Certainly gives some credence to Tom's camp wanting the hunk to distance himself from the quotes. But he apparently did say the words—and distancing himself from those declarations now unfortunately creates the bad side effect of looking like he changed his mind.

TAGS/ Movies , Gossip , LGBTQ
GET POP CULTURED!
*Email entered incorrectly. Please try again.
By subscribing to our newsletter you agree to the Privacy Policy and Terms of Use
Daily
Weekly