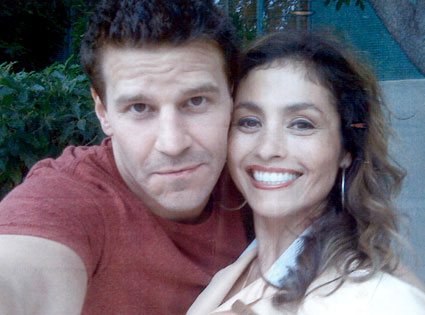 We already knew David Boreanaz is no angel, given his admitted history of hounddogging on his wife. But did he really want to share his anatomy with a Bones extra?

That's the word from celebrity lawyer Gloria Allred, who filed a lawsuit today on behalf of an actress who claims she was sexually harassed by Boreanaz.

According to Kristina Hagan's complaint, the 41-year-old Boreanaz approached her after she completed shooting a bit part on his hit Fox drama to ask for her headshots. Then, per the suit, he sent numerous "sexually inappropriate text messages" to her, including a cell-phone pic of—TMI alert!—his penis.

But Boreanaz isn't going down without a fight.

"The allegations concerning any alleged inappropriate conduct by David Boreanaz are totally fabricated and absurd," his rep told E! News. "There is no validity to this lawsuit.

According to her filing, on Sept. 9, 2009, Boreanaz offered to give her a ride. He told her he was trying to find the right role for her, and informed her he's "the boss" who "could make things happen for her," per court docs.

He allegedly drove Hagan to a park, where, according to the suit, he tried to force himself on her.

"[David] attempted to kiss her and touch her breasts but she pushed him away," the lawsuit states. "[He then] unzipped his pants, pulled out his penis and began stroking it until he ejaculated."

The complaint states that he subsequently "pushed himself on top of her, and when he tried to put his hand down her pants and touch her, she pushed him off of her."

Then, on Sept. 29, he allegedly tried to put the moves on her in his trailer.

After filing the lawsuit, Allred and Hagan briefly addressed reporters and showed a photo of the plaintiff posing with Boreanaz.

"She is an actress who is working toward her goals, but who like many  other actresses has not yet been able to achieve them," said Allred. "For that reason, she is extremely vulnerable as many actresses are in Hollywood."

Added Hagan: "I have confidence in the justice system and that is why I have decided to file this case."

Hagan's IMDb page doesn't include any credits, but her bio says she attended Catholic school, is a married mother of two and her favorite mottos are "'good clean fun!" and "we're human and that's the beauty of it all!"

The harassment suit comes a little more than two months after Boreanaz admitted to People that he cheated on his wife of nine years, Jaime Bergman. He also said he was confessing his marital sins because he feared the other woman, whom he didn't name, was trying to extort money from him and had reached out to an attorney threatening to go public with their relationship.

Allred didn't comment on Boreanaz's blackmail allegations and denied Hagan was his mistress.

Despite the affairs, Boreanaz and Bergman have vowed to work on their marriage and have no plans to divorce.

Find out what some of David's cohorts are up to in our TV Stars on the Town gallery.

TAGS/ Top Stories , Lawsuit , Cheating , David Boreanaz
GET POP CULTURED!
*Email entered incorrectly. Please try again.
By subscribing to our newsletter you agree to the Privacy Policy and Terms of Use
Daily
Weekly