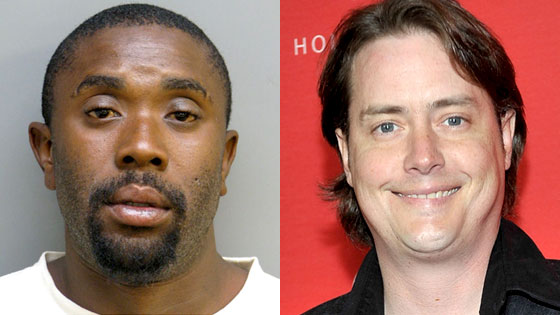 Jeremy London's alleged kidnapper is talking—and predictably denying the allegations against him. But who's telling the truth in this high-profile he said-he said drama?

In a jailhouse interview with RadarOnline.com, Brandon Adams said there was never any abduction. Instead he claimed the actor approached him and the two went on a mutual "joyride" at the behest of London who was looking to score some prescription drugs, specifically Xanax and Oxycontin.

"There was no gun. There was never a pipe," Adams told Radar. "We got drunk and I hooked him up with some Ecstasy and Xanax and we took a joyride and partied for hours."

Not so fast, according to London's spokesman, Dominic Friesen, who smacked down the suspect's story.

The rep said allegations that the Seventh Heaven star—who was busted for marijuana possession back in 2004 and had a prescription pill problem—had relapsed were false and described Adams' tale as a sign of desperation.

"Jeremy London has consistently passed all random drug testing administered by the State of California and has successfully maintained his sobriety," said the rep. "The recent jailhouse statements by Mr. Adams are nothing more than a fabricated and false account of the night in question. He is desperate to avoid a life sentence behind bars and will say anything to avoid the serious charges the D.A. has filed against him."

Last week, London went public about the June 10 incident in which the 37-year-old actor alleged he was held at gunpoint by two men while changing a flat tire and then driven around for 12 hours while being forced to smoke drugs and hand out alcohol in a gang-infested part of the city.

Adams, 25, related his account of the ordeal that's landed him in a Palm Springs lockup on $500,000 bail. He was due in court this morning but his attorney asked for a continuance until July 15.

He said he and his uncle were hanging outside a local 7-Eleven hoping to get someone to buy them a beer when London and his wife, Melissa, drove up with a flat tire. He didn't know London was an actor but noted that he appeared to be "acting really strange. . .pacing and sweating and he looked tweaked out. His wife was acting paranoid too."

At that moment he said a police cruiser came by, prompting a "skittish" reaction from Jeremy and Melissa; in fact, they studiously avoided the officers by running into the store.

According to Adams, after the cops left, so did the former Party of Five star and his missus. Adams and his uncle then walked to a bus stop when they noticed the pair trying to fix the flat on their rented black Ford Focus near an alley. When Adams offered to help, that's when he says London asked him about the drugs.

"As soon as we got in the car, Jeremy asked us if we could get him five Xanax and five Oxycontin," said Adams. "Melissa was asking for Xanax too. I told him I could hook him up but that I wanted a couple of beers. He agreed."

Melissa asked Jeremy to take her home. Reflecting on the alleged kidnapping later, she said authorities told the family that gunpoint robberies that included forced drug-taking were a pretty common occurrence in the area, remarks which drew a sharp denial from the Palm Springs Police Department.

After dropping her off, Adams said the men drove around the neighborhood, "handing out beers to my friends. . .having a good time" before London became annoyed and demanded he get him some pills.

After procuring them, the duo ended up at the suspect's home with his wife and six kids.

"I hadn't been able to get any Xanax or Oxycontins up to that point, but I was finally able to get him three ecstasy and three xanax pills. He took all six pills at once. He was out of his mind high," recalled Adams.

He also dismissed Melissa's claim that London escaped with the help of one of Adams' cohorts, saying he dropped him off in his neighborhood where the actor checked into a hotel.

Palm Springs police executed search warrants yesterday on the homes of two unidentified suspects connected to Adams, but no other arrests have been made in the case.

But giving Adams' account some credence has been the reaction of London's twin, Jason, and his mom Debbie Nelson who have spoken out about their concern for Jeremy. Jason called his purported kidnapping a "cry for help" and urging him to use the moment as an opportunity "get the help he needs."

Since we're on the subject, check out Hollywood Goes Up In Smoke gallery.

TAGS/ Busted , , Jail , Legal
GET POP CULTURED!
*Email entered incorrectly. Please try again.
By subscribing to our newsletter you agree to the Privacy Policy and Terms of Use
Daily
Weekly