Can Michael Lohan Go to Jail for Phone Call Leaks? 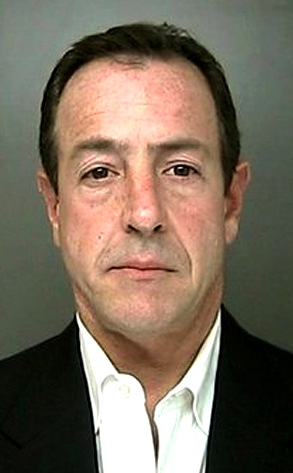 How can Michael Lohan keep leaking taped phone calls and not to go jail?
—Brandee, via the Answer B!tch inbox

Oh, he could go to jail, all right.

Michael Lohan—who has the dubious honor of both media whore and child-star pimp—has reportedly leaked telephone conversations he had with daughter Lindsay Lohan, ex-wife Dina and frenemy Jon Gosselin. Dina has reacted by calling Michael out as the scum he is, as has Lindsay, who prefers the term "loser."

And she's even asked her lawyer to look into all legal options, including criminal ones that could possibly land Michael in the slammer.

Here are the details...

To determine whether Michael Lohan could face criminal charges, though, the biggest thing we'd need to know is where he was when he made and recorded each call, and whether (as it's assumed) the recordings were made without the other party's consent.

In some states, it's illegal for one person to tape another without consent—but not in all states. I can call you from New York, for example, and tape you without you knowing it. And it's legal, so ha ha.

Now, the biggest likelihood is that Lohan's calls were made from either New York—which doesn't require the other person's consent—or California, which does. If Michael Lohan did end up making the calls from California, or any other two-party-consent state, he could face fines or, using the specific example of California, up to a year in prison, according to Cynthia Orr, president of the National Association of Criminal Defense Lawyers.

Now let's suppose Lohan made the calls from what's known as a single-party state. Orr says he might still be looking at a civil court case. Orr's reasoning: Lindsay's and Jon's careers, their trades, are, in essence, their words—what they say and do during paid public appearances, that sort of jive.

So if Michael Lohan recorded those conversations and then sold or even just distributed them without permission, the wronged party could sue to recoup any monetary losses they think they've suffered. That doesn't mean they'd win, but they could try. (Lindsay's lawyer didn't return a call seeking an update.)

Lohan may have yet another legal headache relating to his leaked conversations. Back in 2005, Dina Lohan, one of the people whose conversations were taped, reportedly got a protective order from Michael in Nassau County, New York, requiring him to avoid reaching out to Dina via email or phone through 2011. A violation of such an order could also see Michael thrown in jail, Orr tells me.

As for just being obnoxious, there's no criminal statute against that. If there were, Michael would have been in jail for years now.

TAGS/ Lindsay Lohan , Jon Gosselin
GET POP CULTURED!
*Email entered incorrectly. Please try again.
By subscribing to our newsletter you agree to the Privacy Policy and Terms of Use
Daily
Weekly