Should You Watch the New Scrubs? 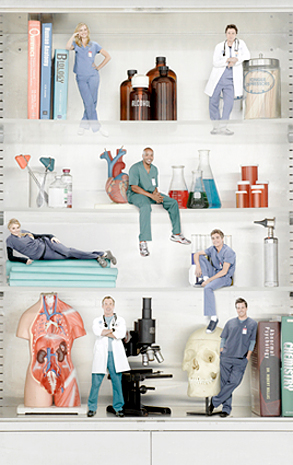 OK, here's the truth: We were skeptical about the idea of a new Scrubs.

As a general rule, shows without Law & Order in the title don't need a ninth season. By the time a series gets that old, the gimmick is usually played out, the castmembers and writers are burned out and the audience is ready to sign out. Especially with the knowledge that some original castmembers were either gone completely or only appearing part-time, Scrubs: The Next Generation just seemed a little desperate on ABC's part.

But we just got the first two eps of Scrubs season nine in the mail, and here's what we think after actually seeing the finished product:

All the usual absurdity remains, along with just enough of J.D., Turk, Dr. Cox and Kelso to make the series seem like the one you know and love, but the new kids all turn out to be incredibly watchable and fresh. If you've been a Scrubs fan for a while, their humor and peccadilloes will seem familiar, but the new people make everything seem shiny, fresh and new.

But before we get too deep into telling you about the new kids, let's circle back to the beloved old gang. You'll be happy to hear that both Neil Flynn and Sarah Chalke make token appearances in the first episode back (airing Dec. 1). The show gives Neil Flynn's Janitor a very amusing exit story that we won't spoil here. And actually pregnant Chalke appears in the season premiere as J.D.'s seven-months-preggo baby mama. The rest of the originals keep doing their thing: J.D. (Zach Braff) and Turk (Donald Faison) are still in love, Dr. Cox (John C. McGinley) is still a delightful jerk, the Todd (Robert Maschio) is still a perv, Kelso (Ken Jenkins) is still a curmudgeon and all is right with the world.

As for the so-called "next generation," we encounter them in the lovely new university hospital, which appears to be a modernist building situated on a Southern plantation. (It's a million times prettier than dumpy ol' Sacred Heart, and you'll dig it.) Eliza Coupe returns as prickly, seemingly emotionless Denise, except now she's met her match in older-than-average, smartass med student Drew (Michael Mosley). The new antagonist is Dave Franco, who plays Cole, a smug, sleazy, entitled douche whose character seems to be half Chuck Bass, half wannabe. (It takes him about 15 minutes to start giving Turk fits.) The standout, though, is Kerry Bishé as Lucy, a fragile and sweet young med student who takes J.D.'s role as Cox's punching bag of choice. Lucy is hilariously naive and hopeful, and you can't help but care what happens to her.

In short, we retract all our previous reservations about season nine, and we're delighted that creator Bill Lawrence and ABC were able to work out a continuation to the series. The deal seems to be paying off nicely for us fans!

Scrubs returns with a one-hour block of new episodes Dec. 1 at 9 p.m. Be there.

Have a burning question about your favorite TV series? Email tvdiva@eonline.com for answers! Plus, follow Kristin Dos Santos on Twitter @kristinalert.

TAGS/ Watch With Kristin , Scrubs
GET POP CULTURED!
*Email entered incorrectly. Please try again.
By subscribing to our newsletter you agree to the Privacy Policy and Terms of Use
Daily
Weekly