More Lindsay Tapes Leak: She Was "Dating" Heath at Time of Death, Has "Problem With Her DNA" 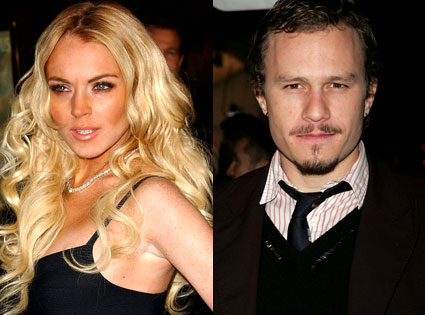 Maybe Michael Lohan should have been held more as a child. But whatever the reason behind his, um, unique brand of parenting, Daddy Dearest is at it again, releasing the latest selection from his greatest-hits collection of phone tapes—and it's a doozy.

Today's leaked recording (with his side of the conversation carefully edited out) features ex-wife Dina Lohan revealing that Lindsay Lohan was involved with Heath Ledger at the time of his drug-fueled death, and expressing concern their daughter might befall a similar fate.

"Right now by starting to drink vodka and s--t again, it's not the right direction," Dina says in the tapes obtained by Radar Online. "Because when she's drunk or takes an Adderall with it, she will do something like Heath Ledger did in a second without thinking.

"And she was dating Heath when he died. I don't know if you know that, but I know 'cause I would drop her off and they were friends. Very, very close, OK?"

Well, if anyone can speak on the validity of a secret relationship, it's a glorified taxi driver.

"So that f--ked her up. And right after that is when Samantha [Ronson] was around."

And make no mistake, Dina doesn't hold back on Lindsay's on-off paramour, either, saying the Ronson family "had some f--ked up s--t, too."

"So you have to feel for them, too. They had a lot in their past. They all go to therapists, too."

As for the Lindsay-Samantha relationship, Dina says that much like Lindsay, the DJ was "a baby herself." Figuratively, anyway.

"Samantha's going to be 31 years old, she's not so young. Lindsay's 22. She almost has nine years of experience on her. That's a lot."

As for the duo's volatile relationship, Dina says it would have been kaput long ago if her daughter wasn't so irrational.

"But Lindsay has to realize, OK, maybe Samantha's not getting it, if it's not working I walk away. It's very easy for a rational person to say. But for an irrational person who has a problem with her DNA and alcohol and Adderall and asthma and every other thing she's got wrong with her, smoking like a chimney..."

Before the tape cut off, the heavily edited, one-sided conversation also flowed to Lindsay's need for constant companionship.

"She cannot be alone," Dina says. "When she sleeps here, she sleeps with me...She has fears from being little and what you did to us.

And while she doesn't go into details about the nature of said s--t, she does offer a clue as to one possible source of tension.

One of the things she's not right about is her desire to get back on the road.

"And I don't want Lindsay getting her license yet. She's got to take that whole course, thank God. Imagine her behind the wheel of a car right now? That would be deadly."

The phone call is just the latest piece of audio to be leaked by Papa Lohan in an attempt to shame his estranged daughter into seeking help—or at the very least keep his name in the news.

His previously released, secretly taped conversations with Dina, Lindsay and Lindsay's former assistant have resulted in the various phone friends lawyering up and threatening to sue Michael.

In the meantime, Lindsay's getting ready to release some audio of her own, in the much less scandalous form of a new album.

"I will DEFINITELY be doing a 3rd album," she tweeted today. "I just want to make sure everything is in line to make it exactly the way i want it!"

Aren't you glad Michael Lohan's not part of your family tree? Check out Hollywood clans slightly more worthy of adulation in our Famous Families gallery.