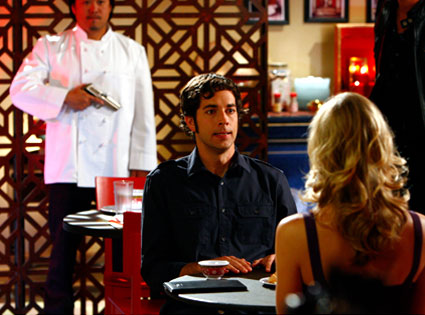 NBC may be the home of some of our favorite shows, but the faltering network has definitely been the target of much scrutiny in recent seasons—particularly in the past few weeks with the departure of NBC Entertainment President Ben Silverman.

But the scoop given out during today’s Television Critics Association panels has made us believe that things might just be turning around. What's more, we're more excited than ever for Bravo's Top Chef: Las Vegas.

Check out some of our goodies from Chuck, Friday Night Lights and the always interesting Heroes...

Chuck: As we already know, our favorite super sleuth is not back until March and for now it's only scheduled for 13 episodes. But President of Primetime Entertainment for NBC and Universal Media Studios Angela Bromstad said they have already seen three or four scripts and loves where the show is going creatively. So, if a back nine is picked up, they are considering an even longer season (yay!), which could run into their summer programming. For now though, that's all just blabber around the studio.

Heroes What does Bryan Fuller's departure mean to the show? "It doesn't mean anything one way or the other," said Bromstad. "I mean, Bryan is not—he's no longer in the writing room, and the show is doing exceptionally well creatively. And our deal with Bryan now is in development, and that's really what the deal is that we have with him. Bryan really is, at this point in his career, wanting to create his own shows."

Friday Night Lights: While Bromstad thinks FNL is "a sensational show" and "on-brand," she added, "Unfortunately, it doesn't have the ratings that we needed to have to, you know, to justify it on the fall schedule. Our plan is to use that as sort of a premiere summer program that is on-brand."

Southland: Bromstad also told us to expect some "creative adjustments" to the L.A. cop show: "I think they tried to do too much in those six episodes. It's really going to focus on Regina King and Ben McKenzie, the two sets of officers and detectives and sort of focus on crimes and how they come together." More Ben McKenzie is good by us!

Top Chef: Las Vegas: Bravo, Bravo! You made our TCA day a little bit brighter with your tasty lunch of caprese, grilled chicken, roasted veggies and other tasty treats. You brought us Quickfire Challenge and let us eat it! You gave us bottles of Top Chef Quickfire cabernet sauvignon. And you even dished a bit on the new season, i.e., viewers can expect a vegetarian challenge, a sustainable fish challenge and the ante to be fully upped now that the contestants are in the land of some of the best celeb chefs in the country. And you brought us our favorite quote of the day. When host Padma Lakshmi was asked what her guilty pleasure is, she said, "I never feel guilty about any pleasure." She added that truck-stop diners "turn me on" and that it's nice to eat in bed sans the high heels and millions watching. So thank you, Bravo!

Trauma: With two huge explosive events in the pilot of this new medical drama on first responders, the big question to the panel was, "Can that intensity, excitement and production value be sustained throughout the season?" "I think we can," said Jeffrey Reiner, executive producer. But he said, it's not going to become "the pileup of the week." It'll focus on the people inside these traumatic events and the people who help them. As for Derek Luke (Antwone Fisher, Notorious, Madea Goes to Jail) coming to the small set, he said, "I'm not really coming to TV. I'm just telling a story on film on a different medium." The show, also executive produced by Peter Berg (known for blowing things up big time on the big screen from time to time), features an ensemble that includes Anastasia Griffith (Damages), Aimee Garcia (George Lopez), Cliff Curtis (Push), Kevin Rankin (Friday Night Lights) and others.

What do you think of Southland's changes? Hit the comments.