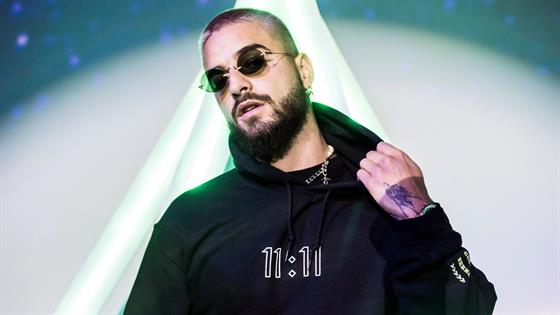 Now Playing
Up Next
Maluma, J Balvin & More Speak Out Against Latin Grammys

It's J Balvin's world and we're just living in it.

The 34-year-old reggaetonero recently released his vibrant and lively album Colores, which is the kind of upbeat and energetic music we need with the ongoing Coronavirus pandemic.

However, the "Blanco" singer isn't just slaying it in the music department.

He's proved time and time again that he's a force in the fashion world with his vivid, audacious and quirky style. And like Bad Bunny, who he frequently collaborates with, J Balvin isn't afraid to take risks or push things over the edge with his ensembles.

Case in point? All eyes were on the Oasis singer when he attended Paris Fashion Week Men's last summer.

He made the street his runway, as he donned colossal coats and in-your-face pants that he paired with equally eye-catching tops. Moreover, accessories played a big role with his 'fits considering he rocked embroidered berets, a coveted Dior saddle bag and unique sunglasses. 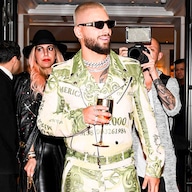 Even when he's on the stage, he uses his clothes as a form of expression. Take for example his rainbow-colored suits during Coachella 2019. He lit up the stage in bright and bold jackets, shorts and shirts that looked straight out of an animated movie.

It wasn't just a concert, it was also a full-on fashion fantasy.

As he previously said in a sit-down interview with Louis Vuitton, "It takes personality to rock colors. I try to be out of my comfort zone."

We're only scratching the surface here. To see J Balvin's fiery outfits over the years, scroll through our gallery below! 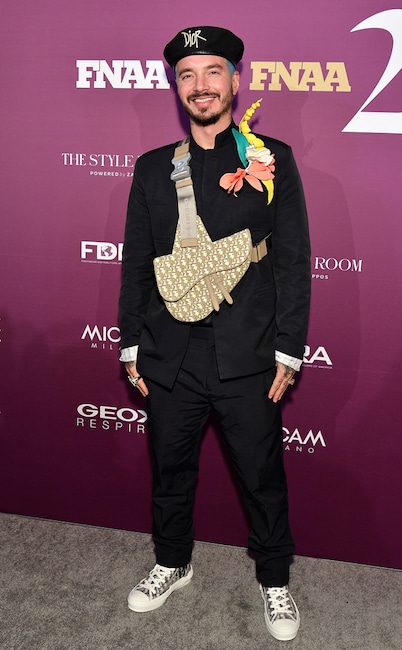 The Colores singer brings high-fashion to the 2019 FN Achievement Awards with his eccentric outfit. From the embroidered beret to the larger-than-life flowers literally blooming out of his blazer, it's no wonder he's the Style Influencer of the Year. 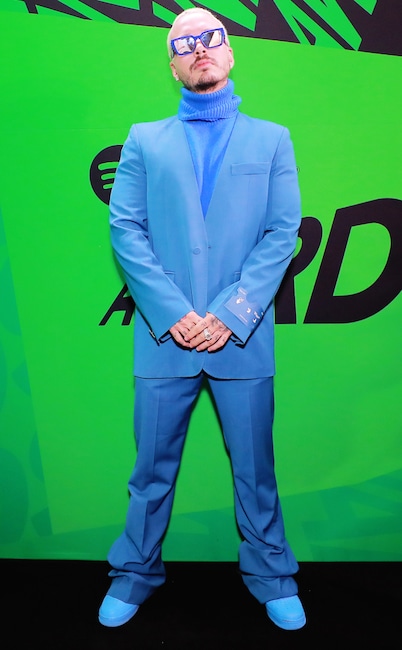 Out of the Blue

One word: wowzers! The Colombian star isn't afraid to push the fashion boundaries, and this dazzling monochromatic blue outfit is no different. 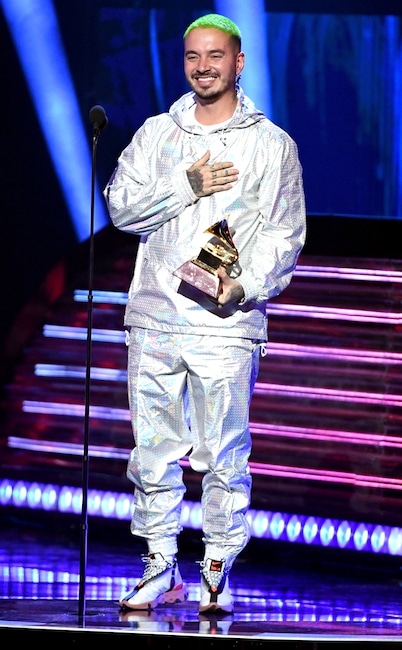 Blinded by the Lights 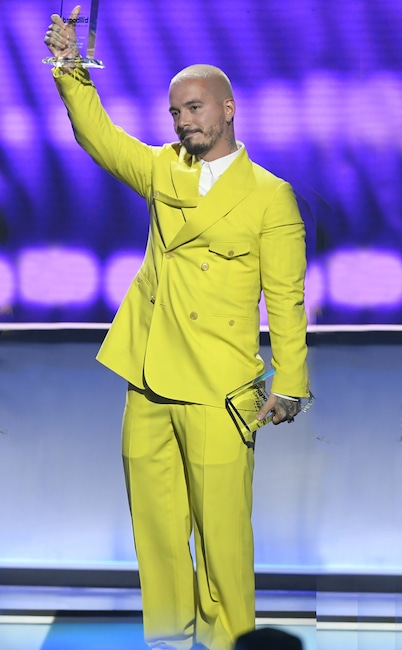 Fresh as a Lemon

Sunny yellow! The 34-year-old star lights up the stage with his lemon-colored suit at the 2019 Billboard Latin Music Awards. 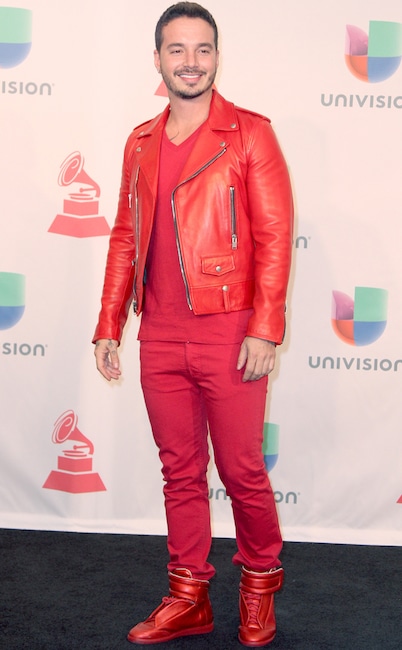 The Colombian singer gives the red carpet a run for its money with his fiery ensemble at the 2014 Latin Grammys. 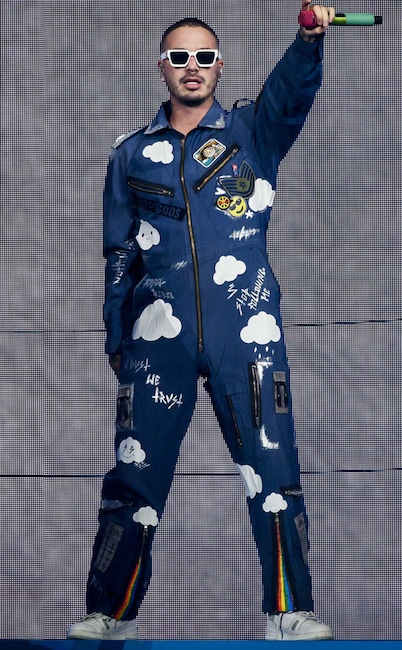 Boring and basique are not part of José Álvaro Osorio Balvín's vocabulary and this playful denim jumpsuit is proof. What's more? The quirky and kitschy patches take it to another style level. 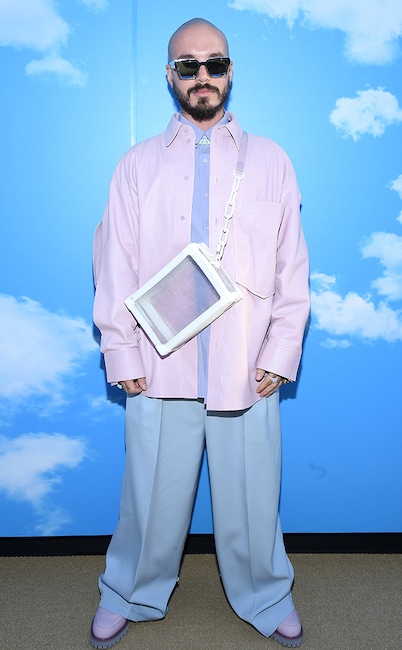 The Vibras singer makes the Louis Vuitton show his personal runway with this minimal yet marvelous pastel ensemble. "It takes personality to rock colors," he tells the luxury label in an interview. "I try to be out of my comfort zone."

When it comes to his style, the beloved artists says, "Whatever makes me happy, is what I do." From the look on his face at the Rick Owens runway show, it's clear he's loving his lewks. 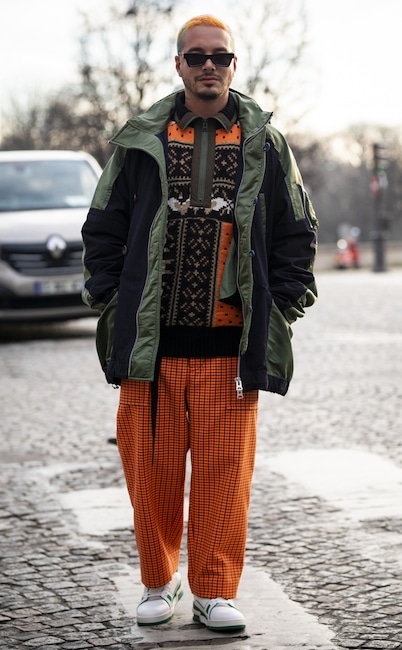 Even when he's walking the streets, J Balvin still manages to look like he's about to do a photoshoot. 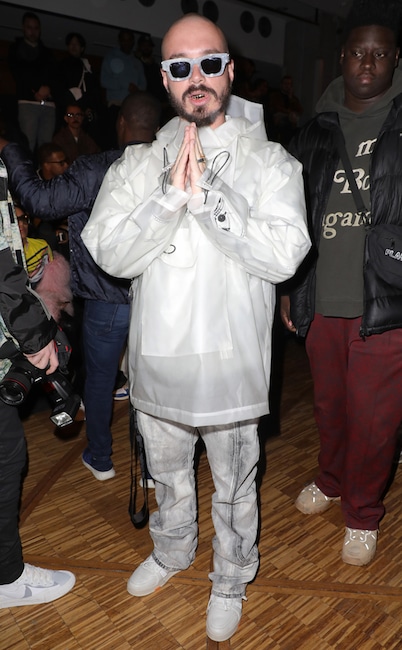 A vision in white! The "Blanco" singer makes a case for less is more at the Off-White Menswear Fall/Winter 2020 show. 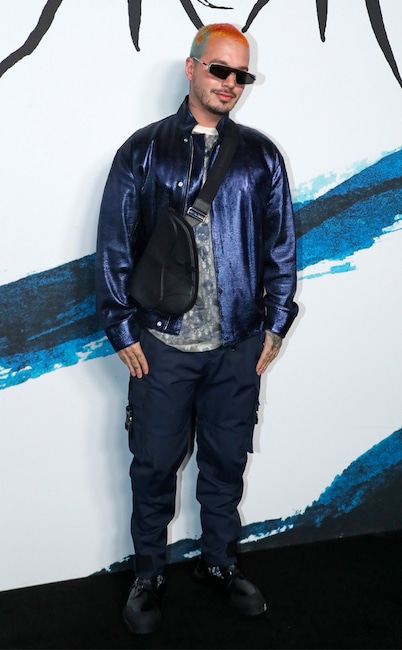 The 34-year-old star is feeling anything but blue, as he wears a night sky-colored bomber jacket, matching pants and menswear bag at the Dior fashion show. 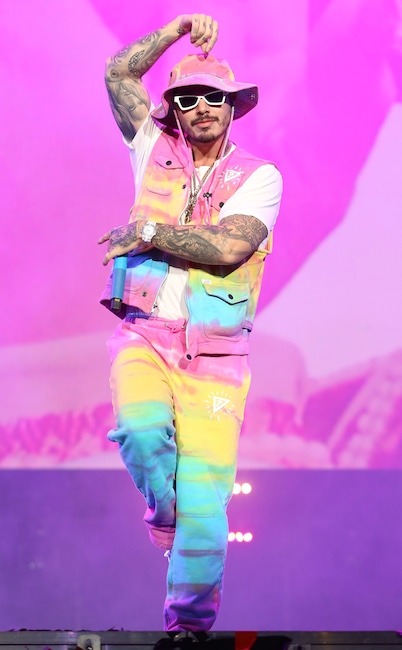 Only J Balvin could bring his show to life with a whimsical, multi-colored and dreamy ensemble. From his rainbow-colored vest and pants to his equally vibrant bucket hat and stark white sunglasses, this lewk is going on our vision board. 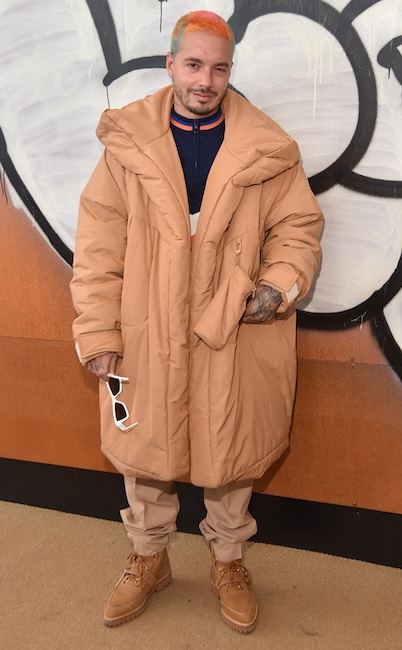 The "Veneno" singer keeps things simple, but striking with his larger-than-life caramel coat, matching pants and boots. His colorful hair and touch of orange on his blouse add a little oomph to his stylish piece. 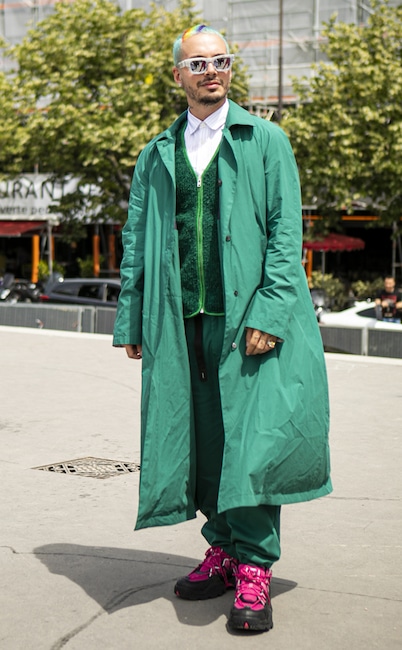 Feeling lucky! The Colombian star lights up the streets of Paris during Fashion Week with a lively green number. 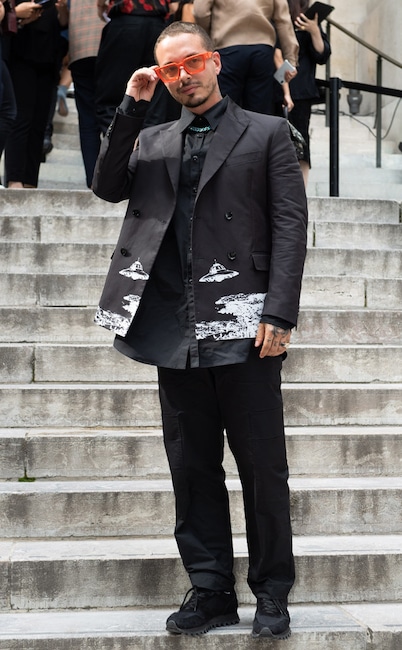 Even when J Balvin isn't rocking bright colors, his outfits are still worthy of being in an art museum. This otherworldly suit, which exudes Star Wars vibes, is proof. 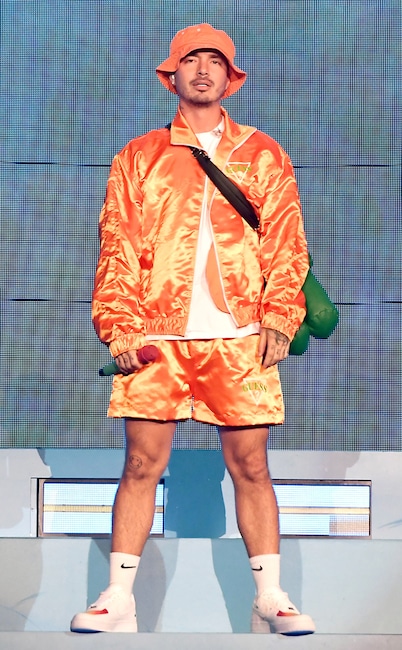 The 34-year-old star shows up and shows out during his Arcoiris tour with an electrifying co-ord set. 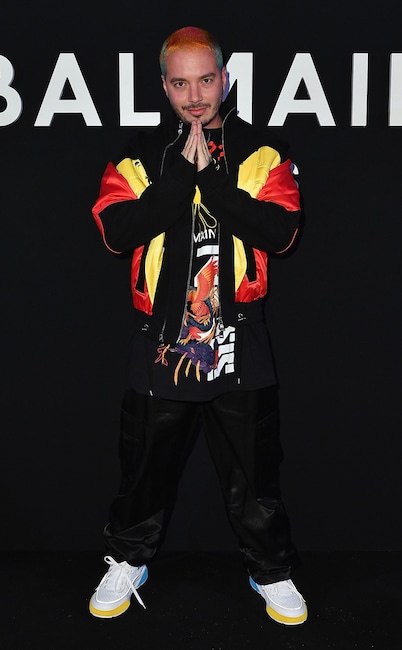 The Vibras singer brings a splash of color to the Balmain Menswear fashion show in Paris. 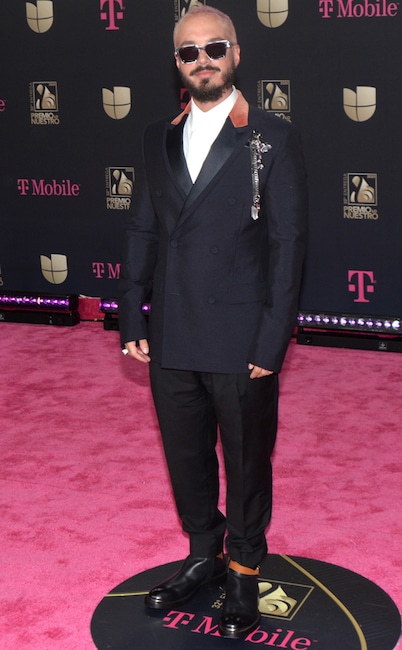 J Balvin cleans up nice! He dons a black suit and makes it more eye-catching with his flashy accessories. 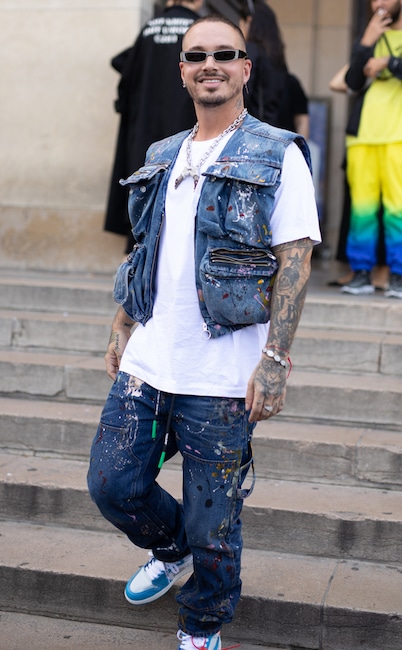 One word: jean-ius! The Colombian singer flashes a huge smile as he rocks a modern-day Canadian tuxedo. 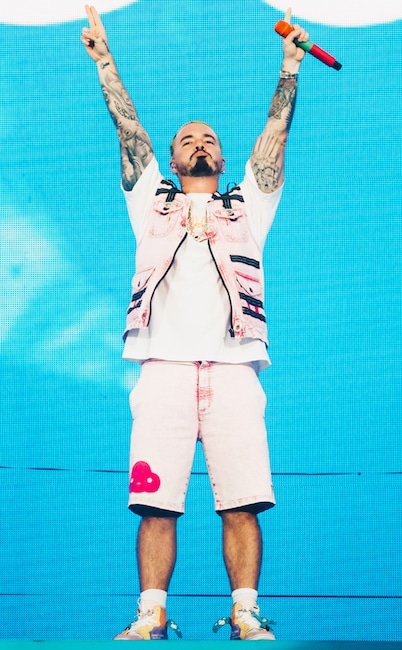 Life is more fun in color! The Colores singer brings a fashion fantasy to the 2019 Coachella festival with his bright and bold pastel outfit. 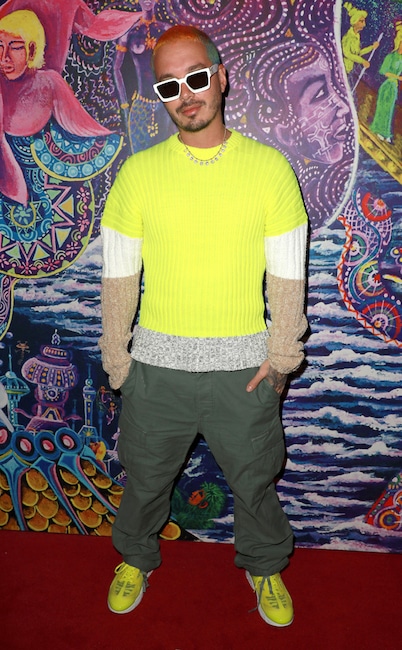 The more bold, the better! The "Amarillo" singer lights up the Kenzo runway show with his bright and colorful ensemble. 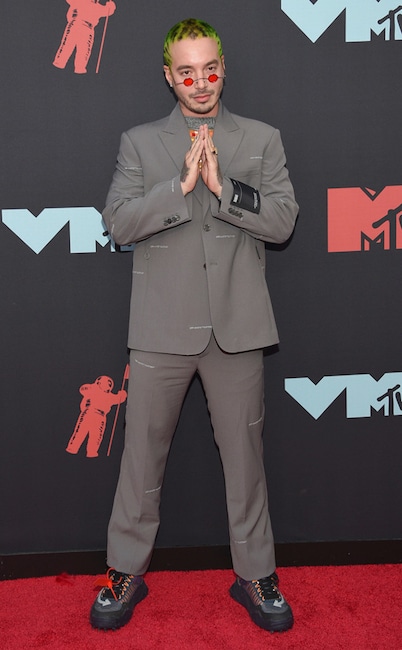 Only J Balvin could make a gray suit come to life. From the red-orange tiny sunglasses to his multi-colored hair, this is a lewk to remember. 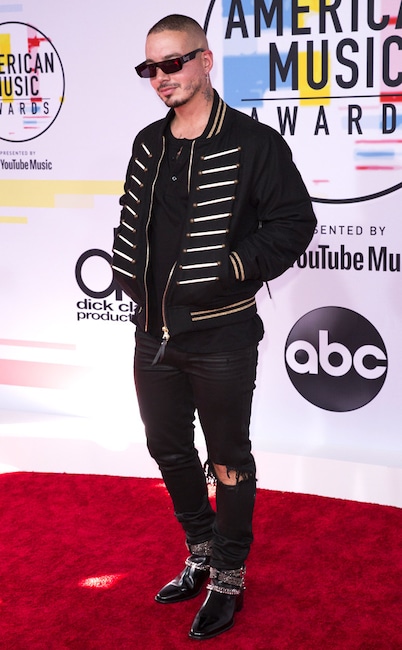 This outfit is on fire! The Oasis singer turns heads at the 2018 American Music Awards with this rockstar-esque outfit.

We can't wait to see what ensemble the Colombian singer rocks next.