Looking Back on Sarah Jessica Parker's Most Iconic Fashion Moments 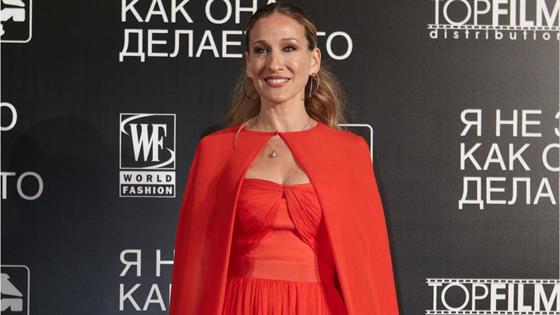 Before there was Carrie Bradshaw, there was Sarah Jessica Parker.

While the star's iconic Sex and the City character cemented her status as a fashion legend on-screen, SJP's personal style is arguably even more enduring than Carrie's.

For decades, Parker, who celebrates her 55th birthday on March 25, has proven to be one of Hollywood's most daring and dependable style MVPs. When she chooses to hit a red carpet you know you are in for a treat.

Whether it's her jawdropping moments at the Met Gala each year or her ahead-of-their-time ensembles from the '80s, the Divorce star always manages to find the perfect balance of trendy and timeless, effortless and fabulous.

"Style is what the individual brings. More often than not, we are drawn to people because they have personal style," Parker once told Harper's Bazaar. "Fashion is what is offered to the consumer. Style is what you make of it."

And she's arguably made more of it than any other Hollywood star over the years. 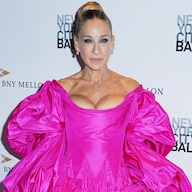 Looking Back on Sarah Jessica Parker's Most Iconic Fashion Moments

While we happily and easily could've chosen well over 100 looks from SJP's fashion history, we managed to narrow the list down to 30 of her most impactful red carpet moments.

Imagine if we had included her impeccable street style, too? The woman has turned the streets of New York City into her runway. 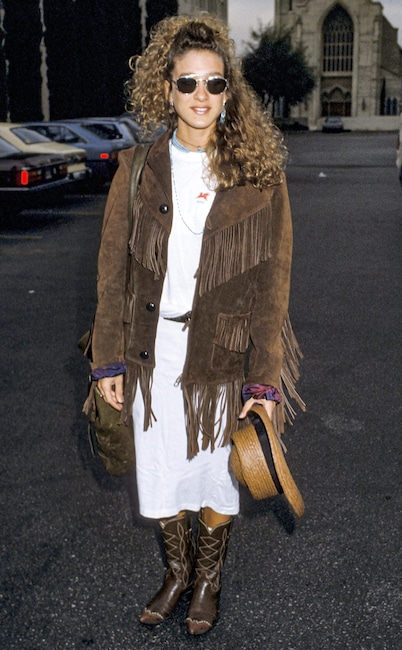 Do you know how many Pinterest boards this image is probably saved on for Coachella inspo? In 1986, Parker rocked this Western-chic look for a "Vote Yes on 65" celebrity rally in Culver City. 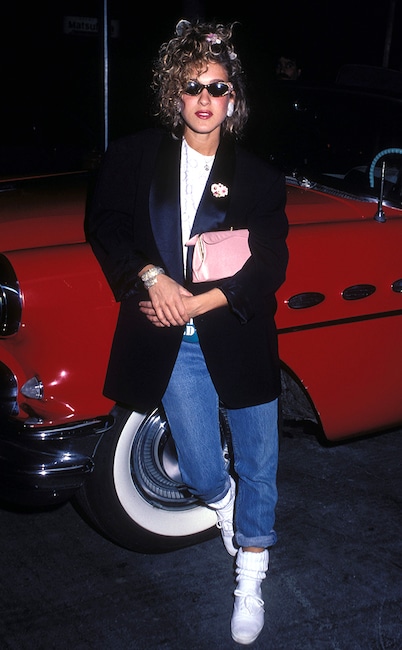 We're pretty sure we say Hailey Bieber rocking this exact 'fit recently...that's how timeless SJP is. 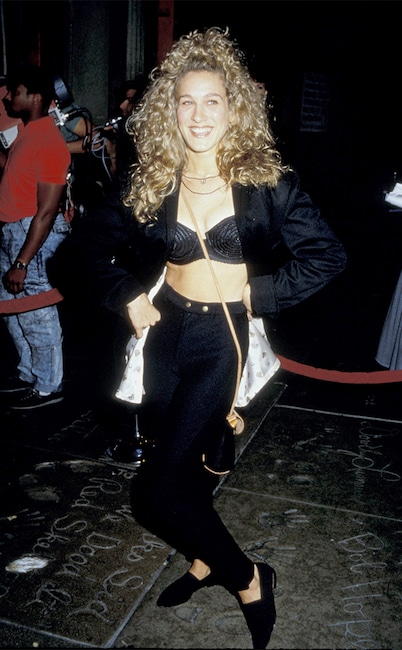 The Square Pegs star served casual Madonna realness at the Slamdance premiere party, which is the most 1987 sentence we could ever write. 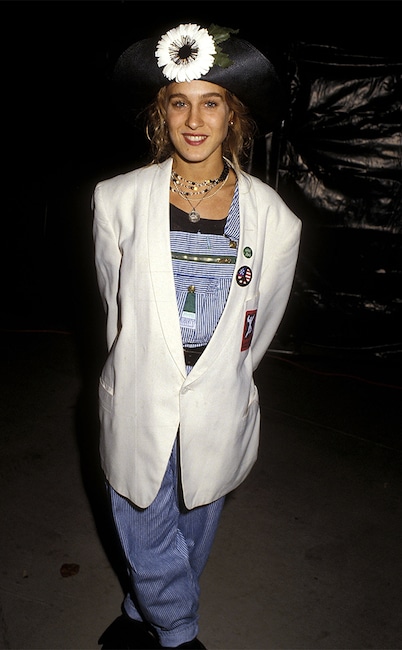 Blossom could never...with Parker rocking the flower hat two years before the TV show even premiered to a charity concert. 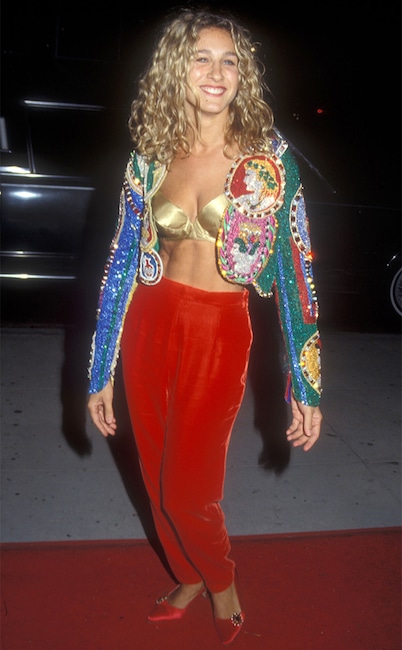 In case you thought it was the role of Carrie Bradshaw that brought out the fashion risk-taker in SJP... 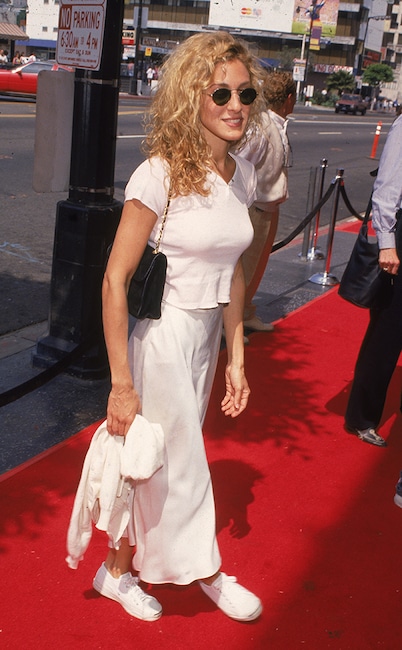 Simple white t-shirt. Silk skirt. White sneaks. This easily could be from a red carpet this year. 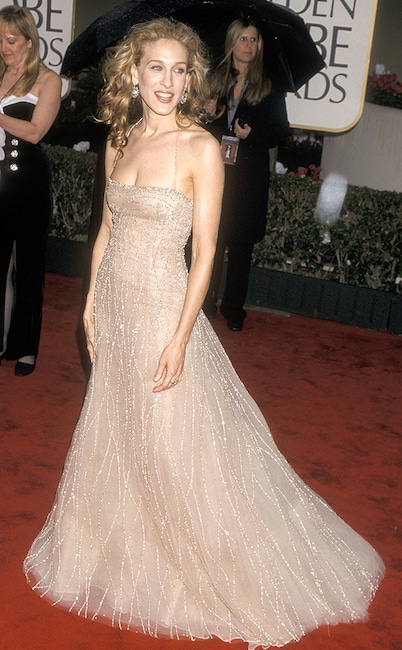 SJP wore this simple and sleek champagne gown when she won Best Actress in a Comedy at the 2000 Golden Globes.

SJP's Oscar de la Renta frock for the Emmys that year was an unmistakable nod to her iconic Sex and the City tutu skirt. 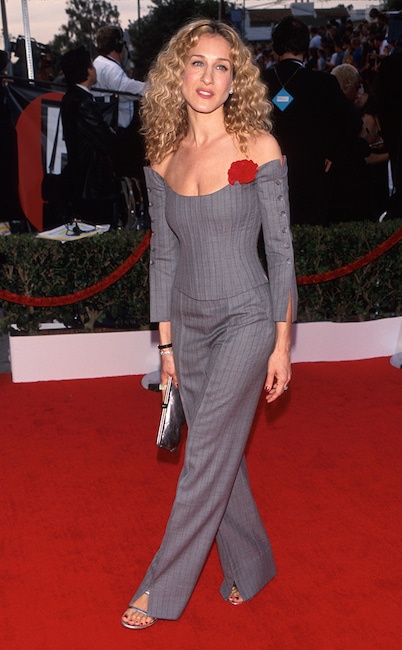 She was well-suited at the SAG Awards in her off-the-shoulder top and pants, unexpectedly complemented with a red flower. 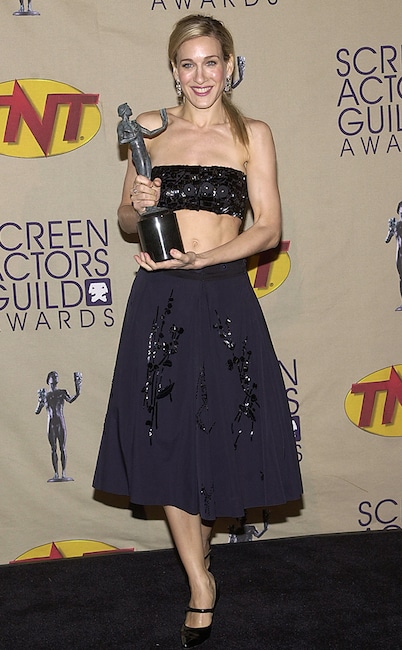 Name the better accessory: the SAG Award or her abs. 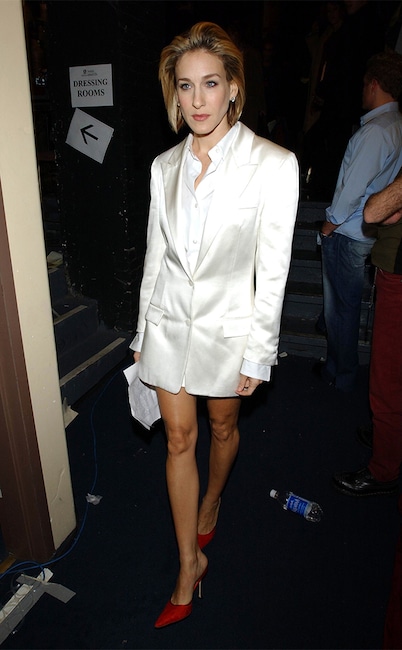 Parker's style is so timeless that this white tuxedo jacket dress that she completely rocked to the 2001 VH1/Vogue Fashion Awards would easily make any best dressed lists in 2020. 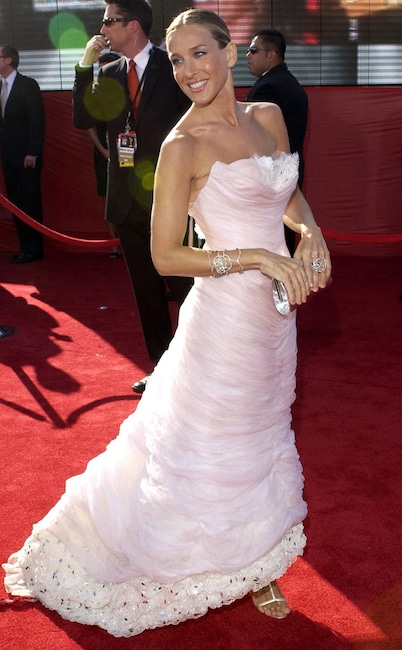 The star donned a light pink Chanel haute couture down at the 2003 Emmy Awards. 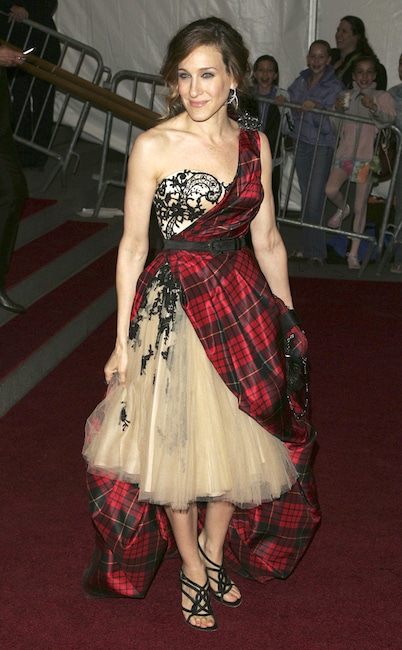 SJP sported this iconic Alexander McQueen creation for the Met Gala that year, with the theme of "AngloMania: Tradition and Transgression in British Fashion." 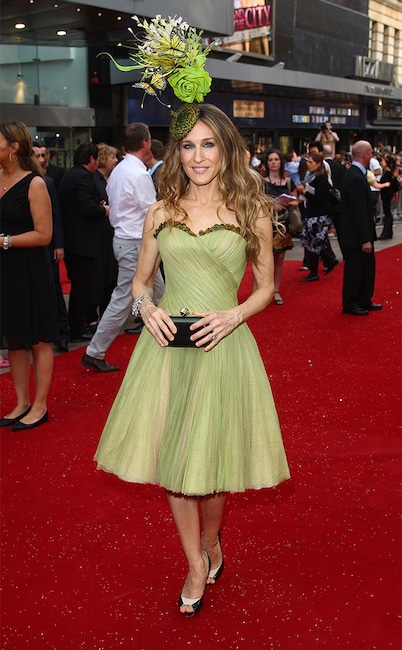 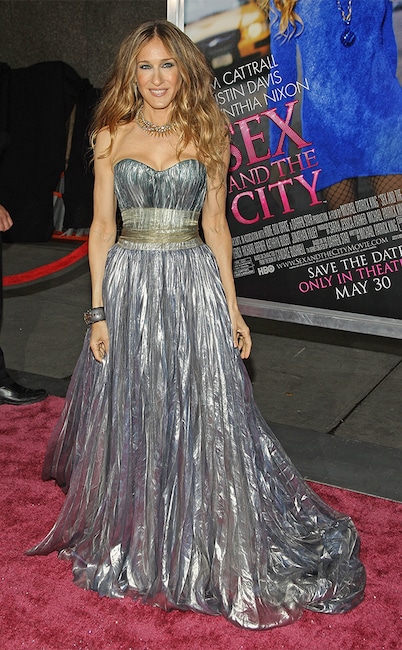 How does one follow up the headline-making green hat from the previous premiere? By rocking this metallic Nina Ricci gown to the NYC premiere. 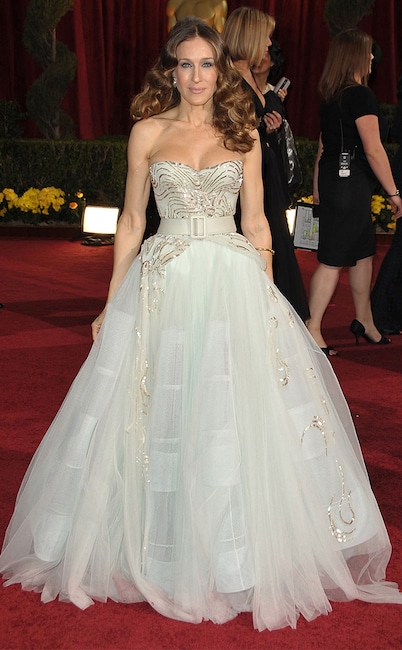 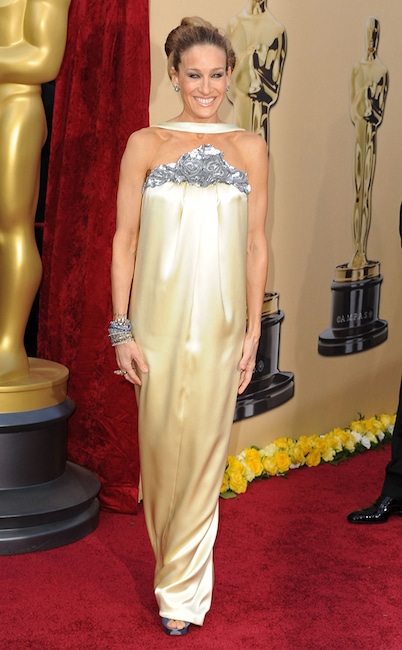 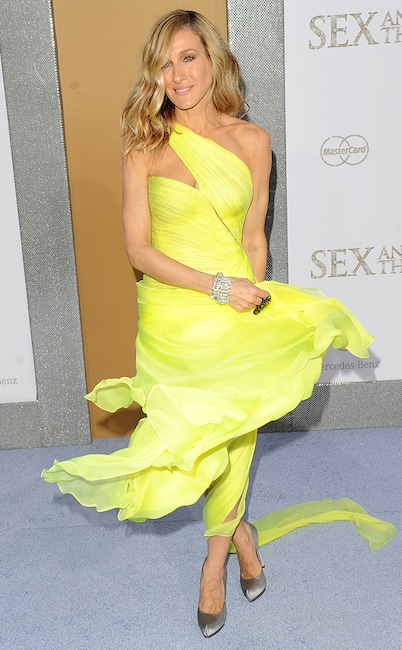 Her neon green dress was a dream than demanded to be seen at the New York premiere of Sex and the City 2. 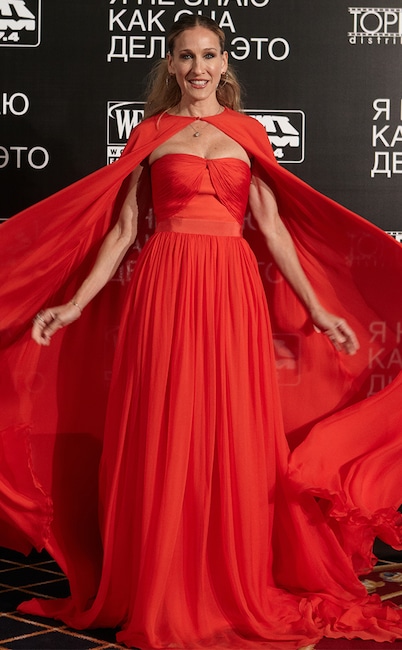 Not all superheroes wear capes...but this fashion superstar does. And let the evidence of SJP's Met Gala dominance commence with one of her quieter looks, which is still a knockout. 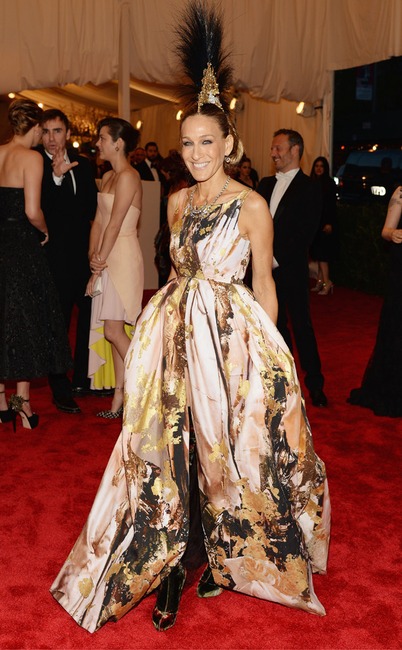 The artist formerly known as Carrie Bradshaw goes punk! For a fresh take on the "Punk: Chaos to Couture" theme, Parker topped off her Giles Deacon gown with a showstopping mohawk headpiece by Phillip Treacy and rocked plaid velvet thigh-high boots. 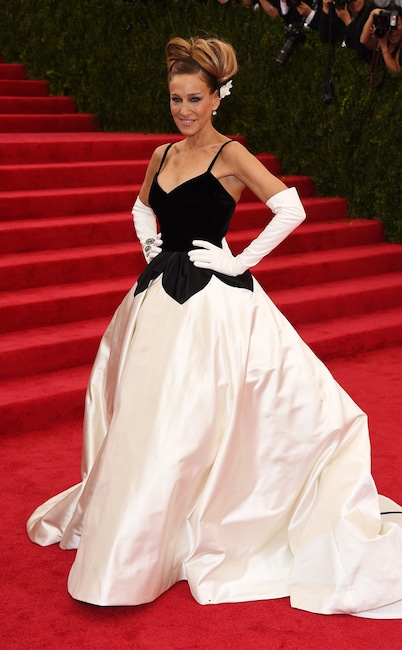 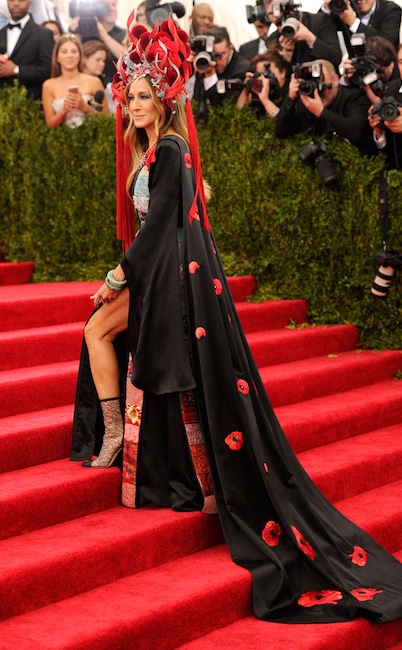 This woman's on fire! In an unexpected move, SJP rocked an H&M gown that she helped design, topping it with a flame-inspired Philip Treacy headpiece for the "China: Through the Looking Glass" theme.

Arguably Parker's most polarizing Met Gala look, the Divorce star went for a Hamilton inspired ensemble for the "Manus x Machina: Fashion in an Age of Technology" theme, a look she later defended. 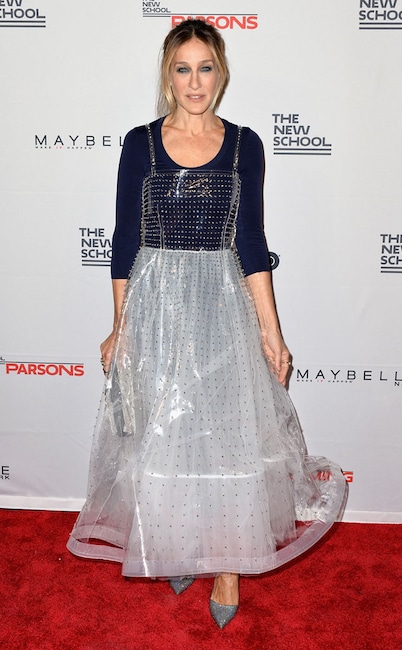 Let this unexpected sheer gown with a navy top serve as a brief-but-welcome respite from Parker's Met Gala dominance.

For the premiere of her HBO series Divorce, Parker turned to a color she doesn't often wear, wearing a rhinestone-encrusted Dolce & Gabbana purple lace dress.

But what really love about this look is that she went for a slight surprise when her footwear, turning to bronze heels from her own SJP collection rather than go for a standard black or nude heel. It's small decisions like that that make SJP such an icon. 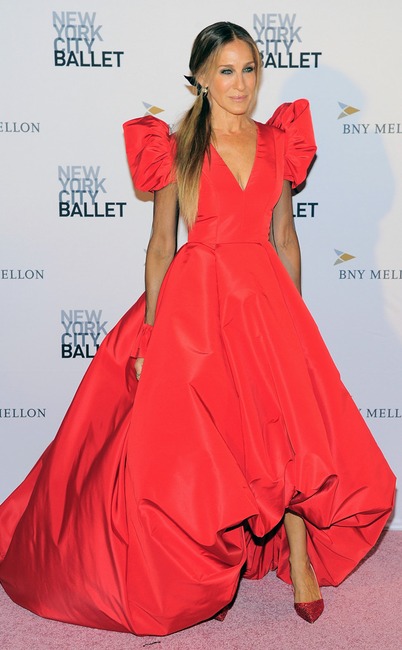 SJP was the lady in red at the 2018 New York City Ballet Fall Fashion Gala, wearing a stunning gown that had a few eccentric details, like its bubble hem, puff sleeves and wrist-cuffs. 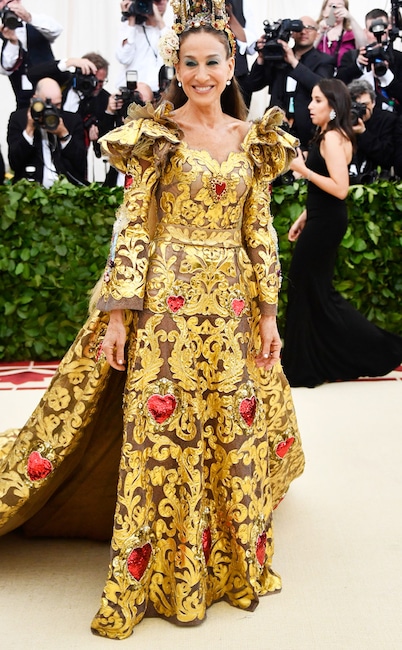 After sitting out of the 2017 Met Gala, SJP returned in spectacular fashion, rocking an intricate headpiece that featured the nativity scene. NBD.

For the Heavenly Bodies: Fashion and The Catholic Imagination theme, SJP paired her ornate headpiece with a stunning Dolce & Gabbana gown with a heart motif and showstopping train.

"I am inspired by the themes. One can only do your best," she told E! News on the red carpet. "This was particularly enjoyable because Dolce & Gabbana—they're devoted observant Catholics—and so they've grown up with the church and imagery and they had a lot of strong feelings and beautiful sketches so it was easy." 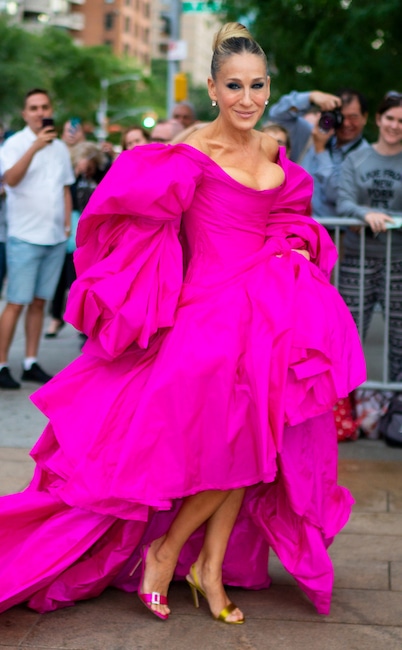 We got carried away with our love for this colorful and bold gown she wore to the 2019 New York City Ballet Fall Fashion Gala... 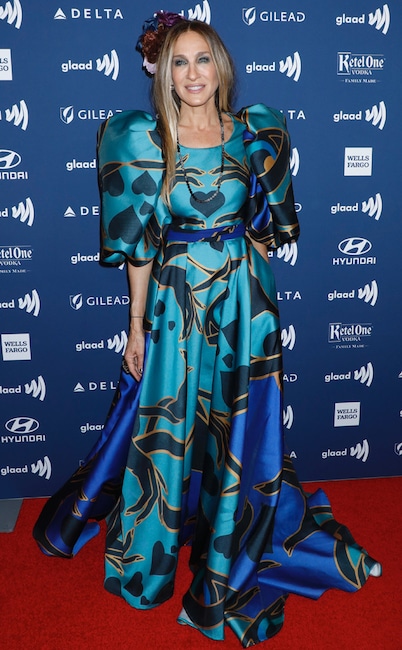 For the GLAAD Awards, Parker went all-out in this Elie Saab dress, complete with a train and puff sleeves, accessorizing with a necklace and silk flowers in her hair. More sometimes is more.