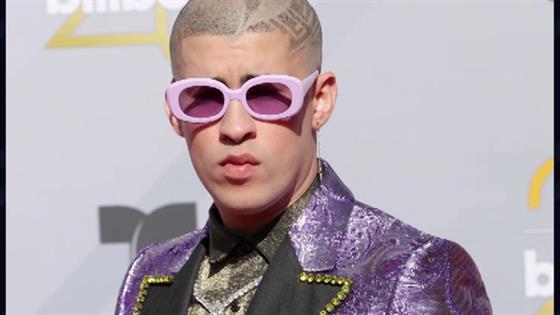 Boring and basic are two words that aren't part of Bad Bunny's vocabulary.

The Latin trap star, whose real names is Benito Antonio Martínez Ocasio, is not only known for his music around the world. He's also famous for his electrifying and daring fashion.

Take one look at El Conejo Malo onstage or on the red carpet, and you'll see he's pulling out all of the style stops with something just as loud and head-turning as his chart-topping tunes.

In fact, he's explained before how his love for fashion and singing often go hand-in-hand.

"My style influences my music and everything around me," he told Billboard in a sit-down interview. "It can be said that the way you dress is like a type of artform. I think everyone should dress [in a] way that uses their creativity... and as a way to express themselves however they want to." 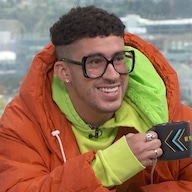 The 26-year-old star is always showing up and showing out... no matter the occasion.

From donning a prosthetic third eye at the 2018 American Music Awards to lighting up the 2020 Super Bowl Halftime Show with a silver coat that featured 13,000 Swarovski stones, his lewks are simply unique and unforgettable.

To see Bad Bunny's glorious fashion evolution, scroll through our gallery below! 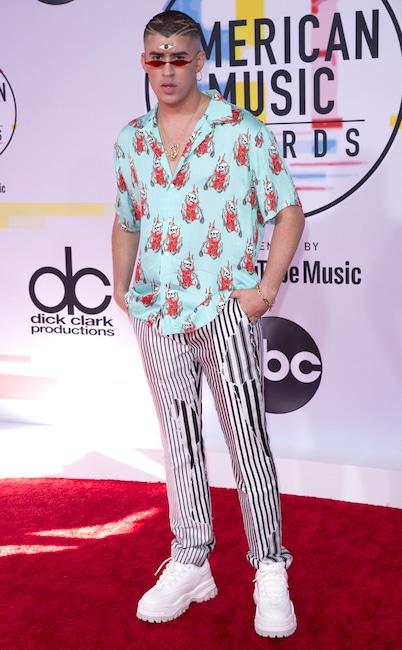 All eyes are on Bad Bunny at the 2018 American Music Awards... and he wants it that way! "The eye represents power and confidence," he shares with Billboard. From his black-and-white striped pants to his colorful skull-adorned blouse, this is one iconique ensemble. 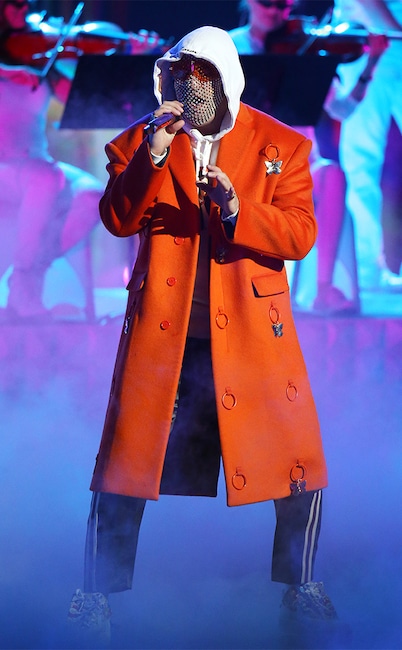 The jewel-encrusted face mask is a whole ass lewk alone. But the in-your-face orange coat with butterfly accessories and white hoodie make even more fabulous. 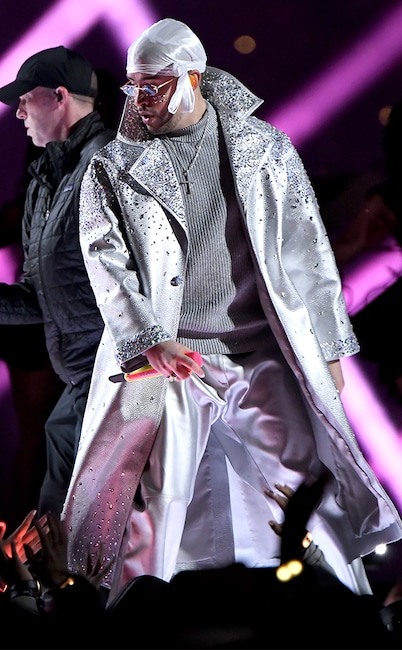 The 26-year-old singer makes the crowd go wild at the 2020 Super Bowl Halftime Show. His custom silver bedazzled coat also drops jaws with its blinding 13,000 Swarovski stones that were hand-sewn and hand-selected. 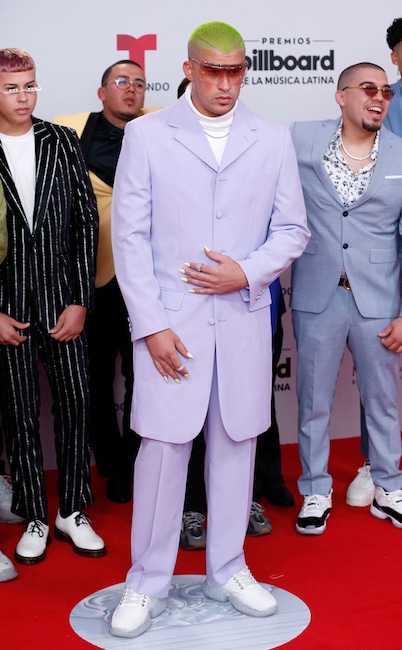 Green with envy! The Puerto Rican star makes the red carpet his runway at the Billboard Music Latin Awards with his lavender suit and lime green hair. 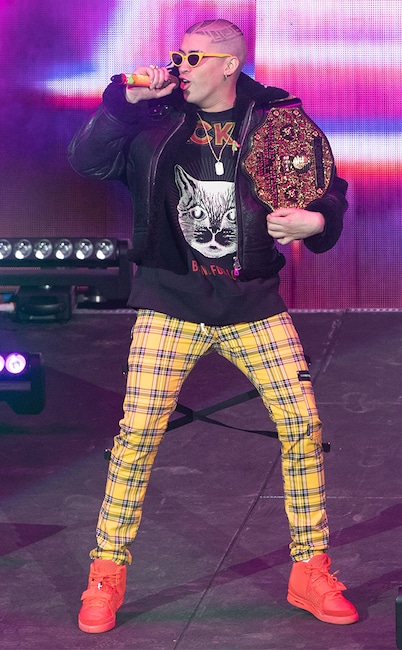 This lewk is a knock-out! Bad Bunny takes the stage in Miami with a eccentric ensemble: the bright-yellow plaid pants, red sneakers and wrestling belt is chef's kiss. 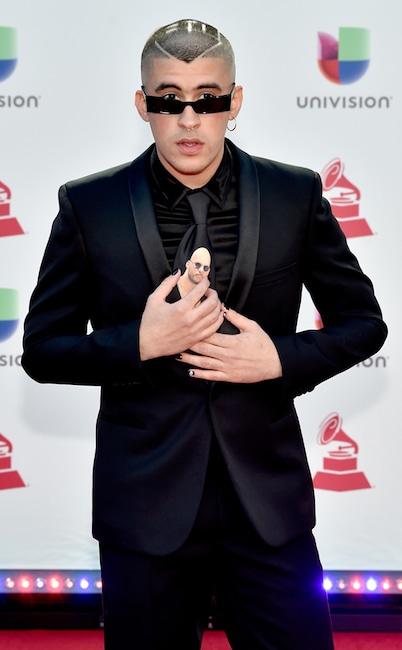 The Latin trap singer pays homage to one of his heroes at the 2018 Latin Grammy Awards: Stone Cold Steve Austin. 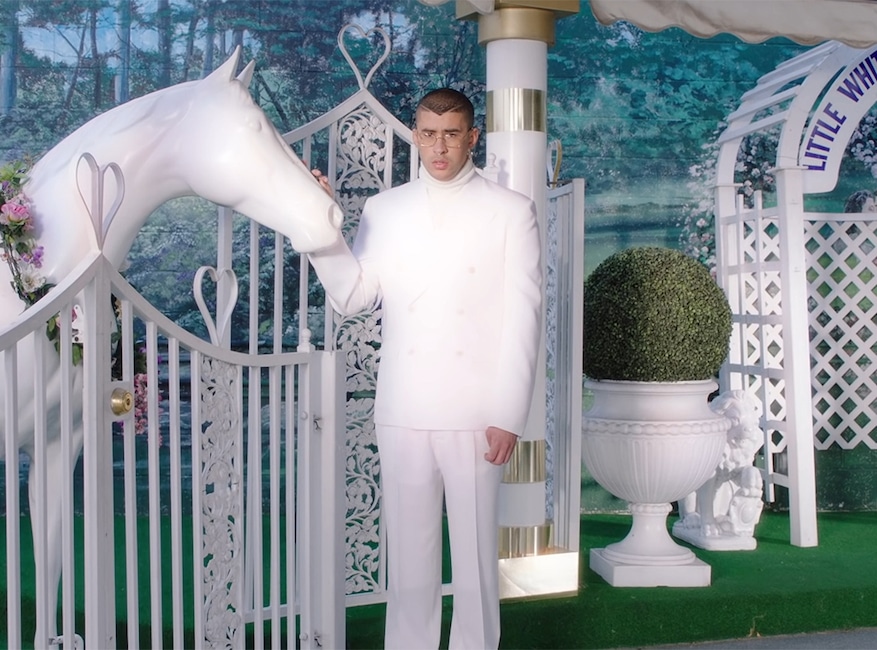 El Conejo Malo looks like an angel with his all-white suit that he dons in his music video "Si Estuviésemos Juntos." 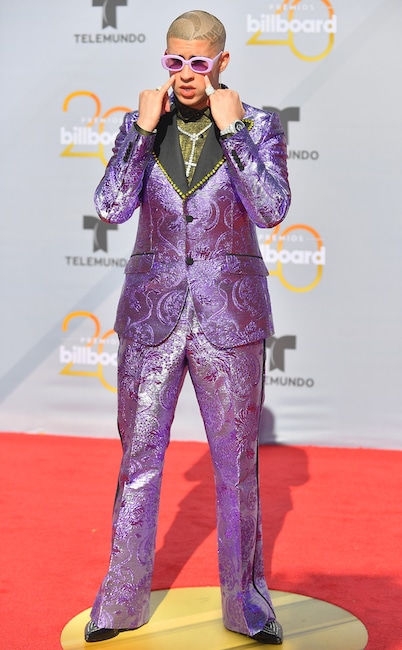 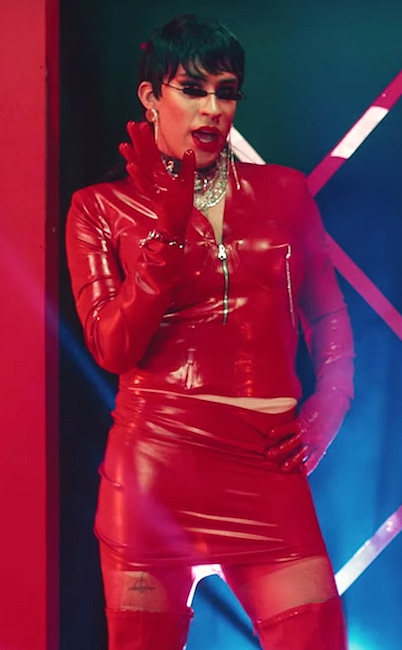 The Puerto Rican singer makes heads explode and temperatures rise with his red hot, hot, hot outfit in the "Yo Perreo Sola" music video. From the latex leather corset top and matching skintight skirt to the thigh-high boots, this lewk is everything. 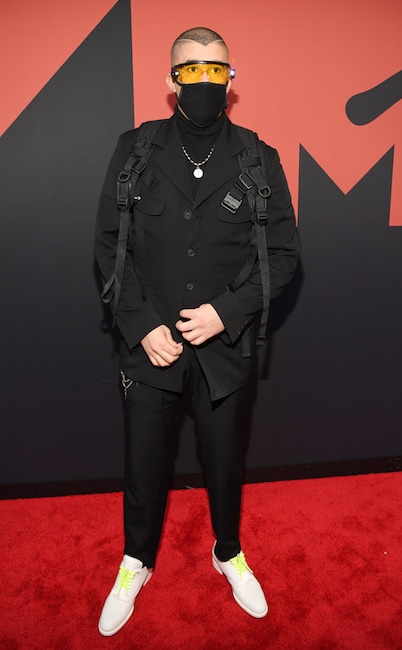 All in the Details

Looking sleek and chic! The "Vete" star wears an all-black 'fit that blends high fashion with everyday-wear at the 2019 MTV Video Music Awards. 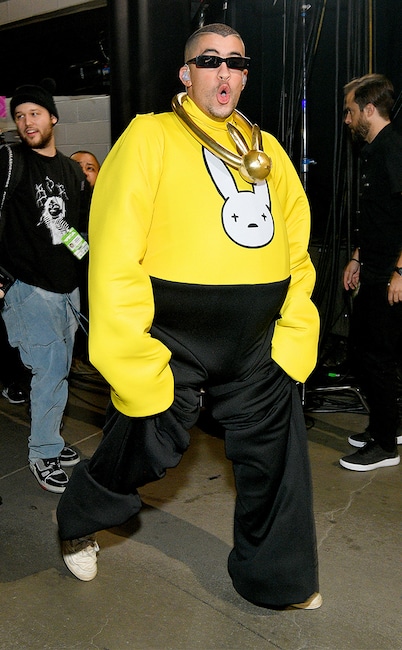 One word: unforgettable! The Oasis singer takes the stage with J Balvin at the 2019 MTV Video Music Awards in an electrifying custom-made costume. 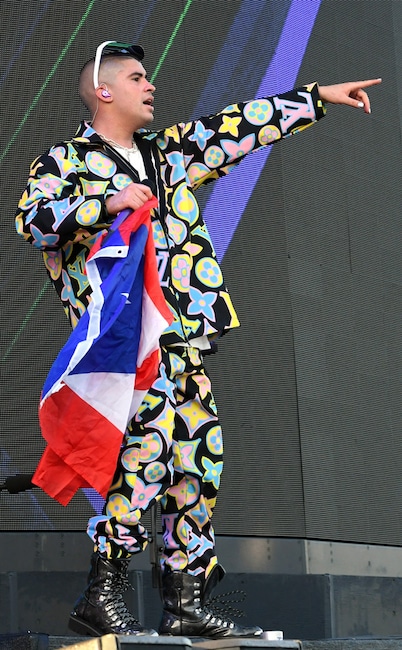 Bad Bunny makes a grand entrance during his 2019 Coachella set with a colorful Imran Moosvi design. His holographic sunglasses and black combat boots tie the flashy lewk together. 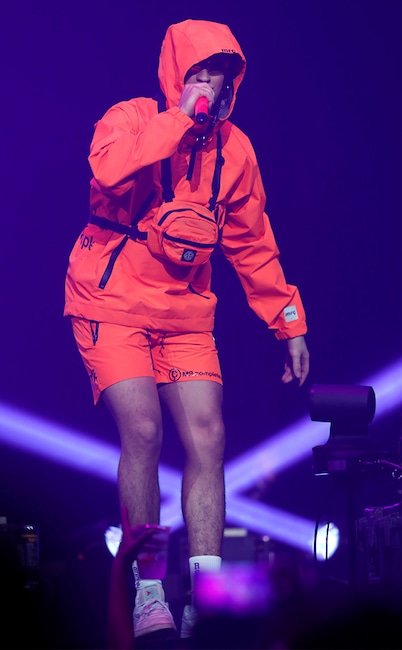 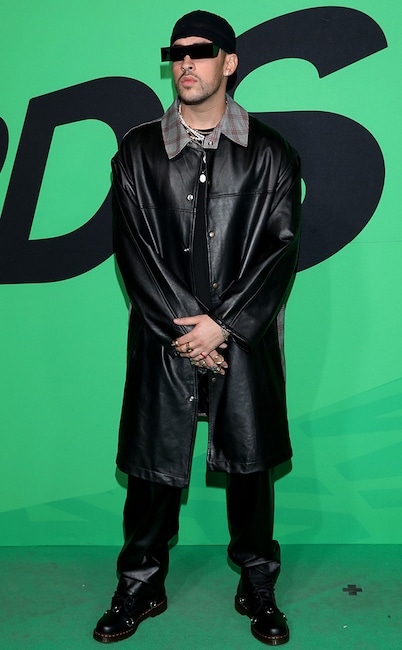 El Conejo Malo goes for a goth-glam vibe at the 2020 Spotify Awards with his Matrix-esque ensemble. 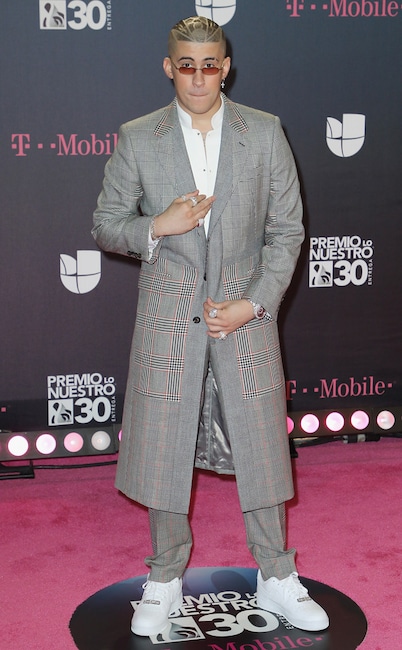 Sometimes, less is more. The "Caro" singer dons a grey plaid outfit that's anything but basic. 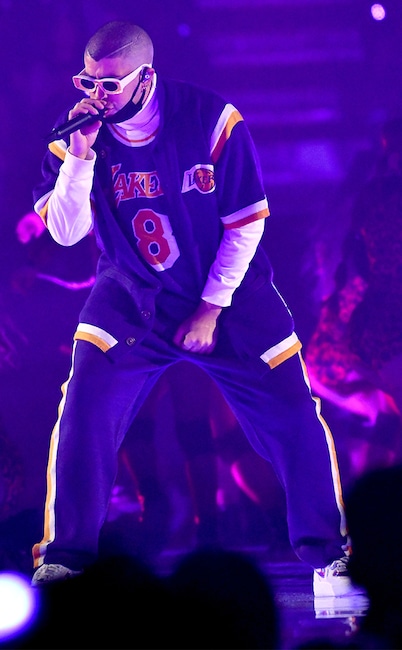 The 26-year-old star takes the stage in Inglewood, Calif. and pays homage to the Los Angeles Lakers with his purple and gold jersey. 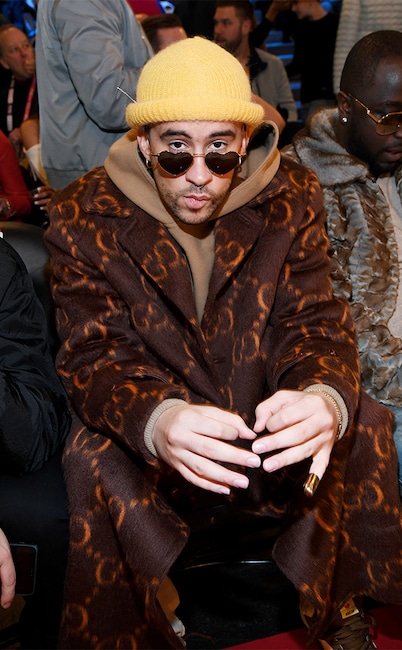 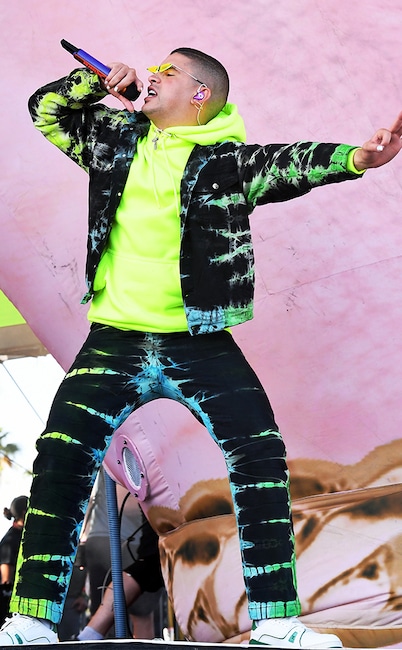 The Latin trap singer lights up the stage at 2019 Coachella with his neon hoodie and matching multi-colored suit. 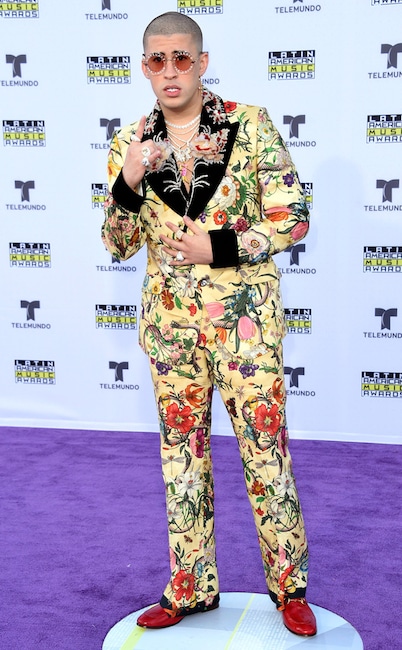 Not one for boring or basique suits, El Conejo Malo pulls out all the fashion stops at the 2017 Latin American Music Awards. He even wears a diamond pendant that he had specially made. 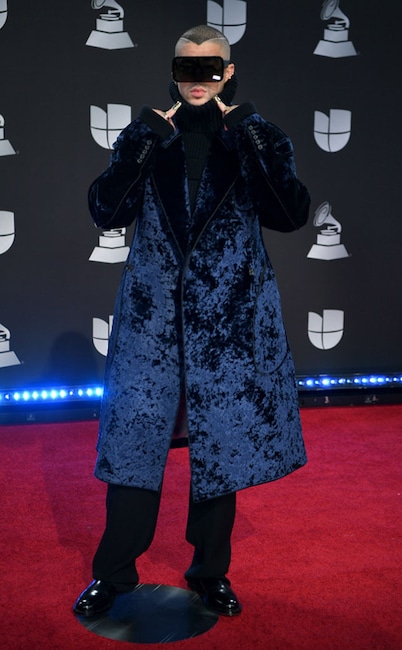 His voice may be soft as buttuh, but his fashion is soft as velvet! The 26-year-old star shows up and shows out in a larger-than-life blue velvet coat at the 2019 Latin Grammy Awards.

We can't wait to see what the Latin trap singer wears next.