These Wildly Creative Celebrity Marriage Proposals Will Warm Your Heart 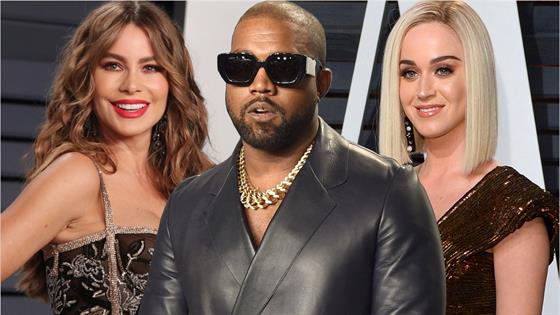 Traditional wedding season may be in limbo (though not for this New Orleans couple), but March 20 remains National Proposal Day, and if there was ever a time to tell a significant other (whom you're truly prepared to marry) that you'd like to turn your relationship into a forever situation—it's now.

And even if not, celebrating all the love in the world is never a bad idea.

Because when the world gets scary, that's all the more reason to remember the kindness, generosity and romance that manifests itself every day, in gestures both big and small—and when it comes to some marriage proposals pulled off by the rich, famous and impressively creative, the gestures can get quite big. 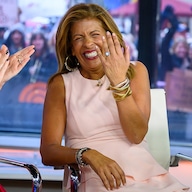 So in honor of National Proposal Day, which is timed to coincide with the spring equinox in the Northern Hemisphere (and autumnal equinox in the Southern), here are some of most inspiring, romantic and ridiculously thoughtful proposals we've seen from the celebrity set: 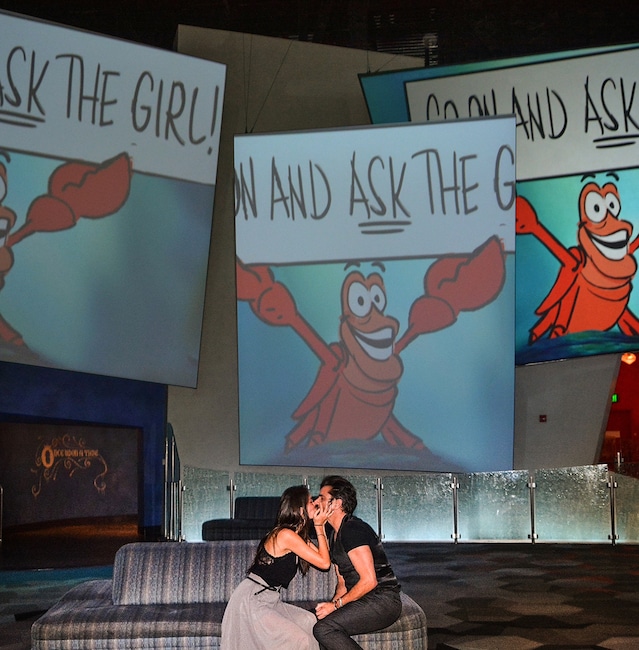 Bob Iger—only the CEO of the Walt Disney Company at the time—emailed Stamos after noticing how big of a Disney fanatic McHugh seemed to be, going by her Instagram. His suspicions were confirmed and Iger gave his blessing to have Stamos' animator pal Paul Briggs splice together all of the most romantic Disney and Pixar movie moments for the Full House star's proposal.

Obviously Stamos took McHugh to Disneyland, where they watched the finished product and he both popped the question and kissed the girl. 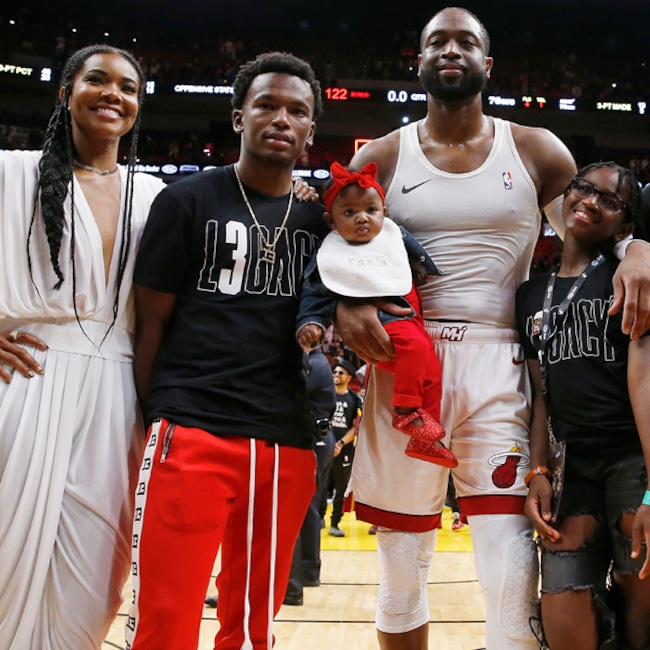 It was a family affair when Wade proposed to the Bring It On star in 2013.

"We were just spending what I thought to be a fun day with the kids, having a little quality time," Union shared on Good Morning America in 2014. After brunch, they went to tour their home that was under renovation at the time.

"They were like, 'We wanna do a presentation for you,'" Union said. "They like to do skits and songs and stuff, so we turn around, and they're like, 'Okay, we're ready!' and I turn back around and [the kids] were holding up signs that said, 'Will you marry us?'"

Then she turned around and Wade was down on one knee. 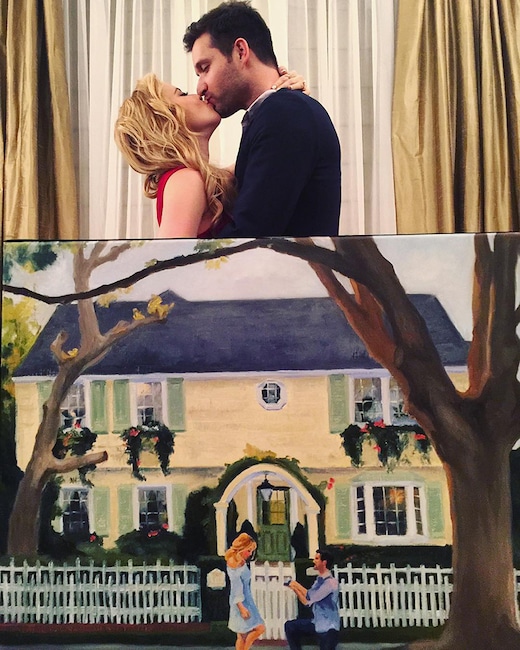 In time for Christmas in 2015, Kapostasy commissioned a painting of himself proposing to his champion figure skater girlfriend in front of her house in California and had it set up inside a display window at the Plaza Hotel in New York.

Perfect scores across the board for program components and technical difficulty. 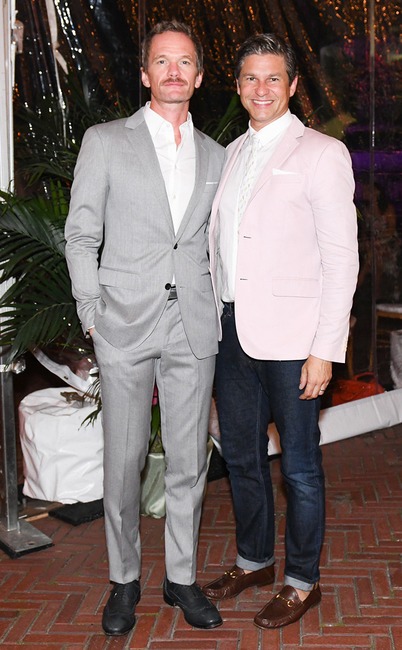 These longtime loves both did the honors, with Burtka offering up a ring first in 2007 on the New York street corner where they first met—Ninth Avenue between 44th and 45th.

"I thought he wanted to get some booze or something," Harris recalled to Out in 2012, remembering how Burtka had their car pull over suddenly when they were on their way to a casino. "And then he got on one knee and proposed, and I was so freaked out by it that I said, 'Yes,' but I didn't know what it meant. Then I got the ring and loved it, and a year later, on Valentine's Day, I proposed to him in Santa Monica." 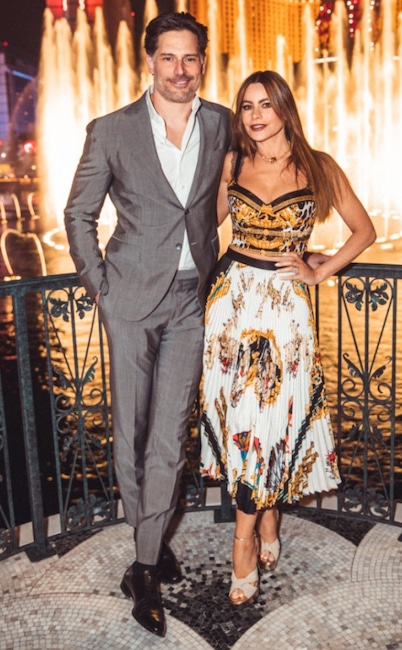 Manganiello prepared his proposal in his Colombian-born girlfriend's native Spanish and popped the question on Christmas Eve 2014 in Kauai.

The True Blood star later said he wanted to propose on the beach, but the paparazzi were everywhere, so he settled for inside the luxurious St. Regis Hotel, where they were staying. And it sufficed.

"We had this big bay window, and the sun was going down pink over the mountains and over the bay, and I had this ring," he told Haute Living. "I had looked at every ring in the world, and this is the ring that I wanted. I had a whole speech prepared in Spanish. I proposed to her on one knee in Spanish with the sun going down. It was awesome." 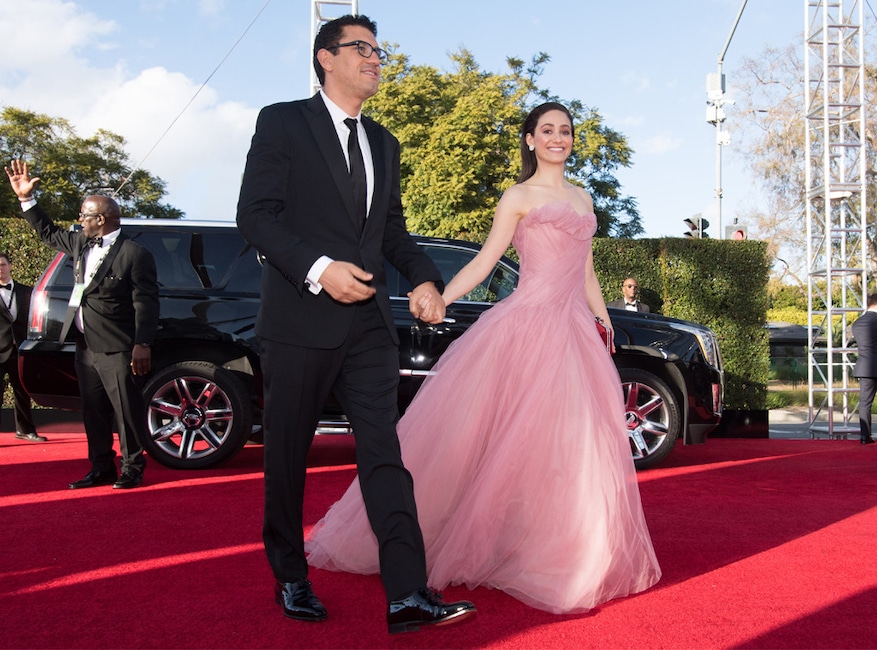 The Shameless star had a tradition of reading the New York Times' "Modern Love" column to the Mr. Robot creator every weekend, even if it had to be over the phone. After they skipped a Sunday, Esmail insisted Rossum read the column the following Friday—which, suffering from a backache, she begrudgingly said she'd do from the bathtub.

"I didn't notice any kind of ring in his pocket, and I began to read the article, and the story is about a director who falls in love with an actress, and I started to think: Huh, that's strange," Rossum told the story to Vogue. "And then I realized that it was our love story. At first, I freaked out because I thought perhaps he had actually put it in the paper and I hadn't seen it, and everyone knew it but me. And then, I kind of scanned to the end and it said, 'Love, your Sam.' And I realized that he had gone through this whole process of writing this whole story."

Esmail called in a favor at the Times to have his essay printed to look like a legit page in the paper, featuring a Ralph Lauren ad at the bottom and everything. 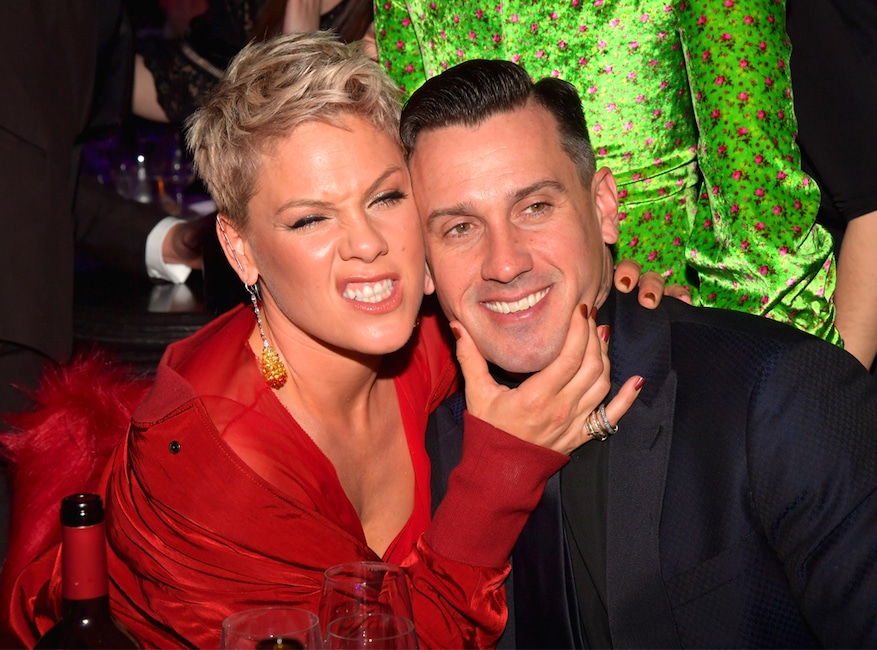 The "Raise Your Glass" singer took the bull by the horns and proposed to her motocross-racing beau when he was mid-lap in scenic Mammoth Lakes, Calif, in June 2005. As Hart passed, Pink held up a sign reading, "WILL U MARRY ME?" And on the next turn: "SERIOUS!"

He pulled over and said yes. 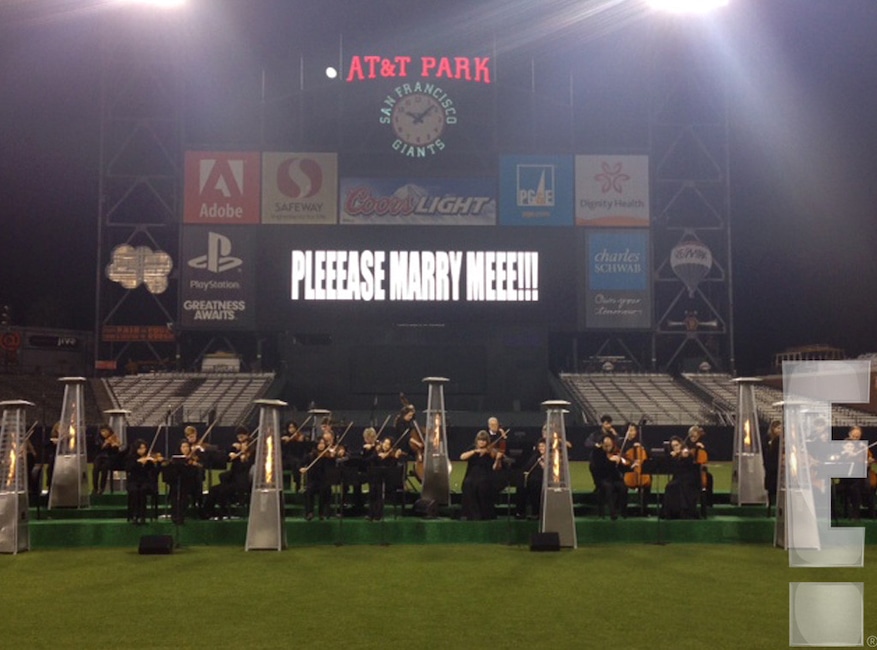 Of course Kanye went all out to pop the question in October 2013, renting out the San Francisco Giants' house, AT&T Park, and imploring Kim to marry him via the jumbotron while a 50-piece orchestra played Lana Del Rey's "Young and Beautiful," followed by Keri Hilson, Ne-Yo and Kanye's "Knock You Down."

Not surprisingly, there were literal fireworks. 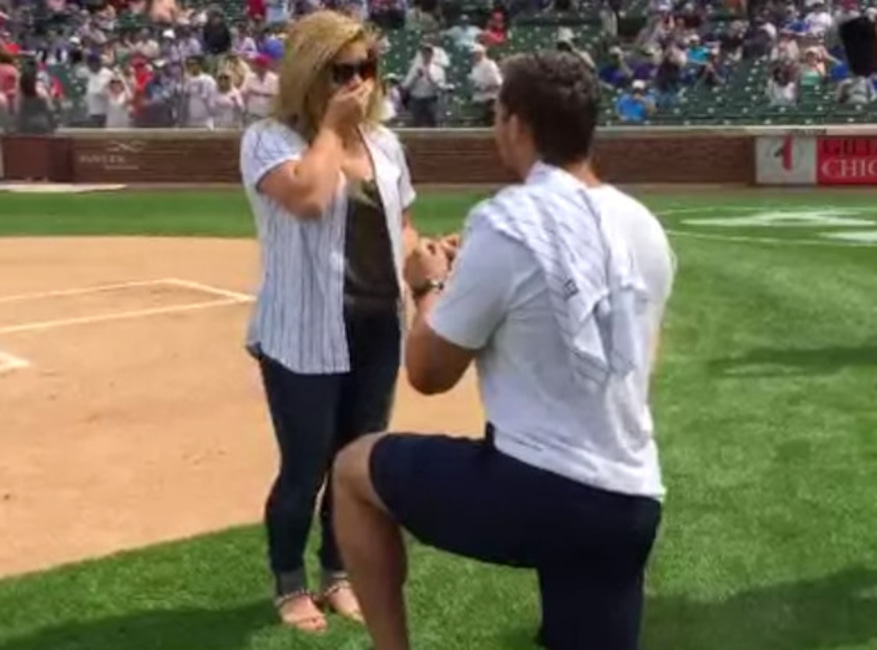 The Olympic gold medalist had just thrown out the first pitch at Wrigley Field with teammate Alicia Sacramone when her boyfriend got down on one knee in June 2015. 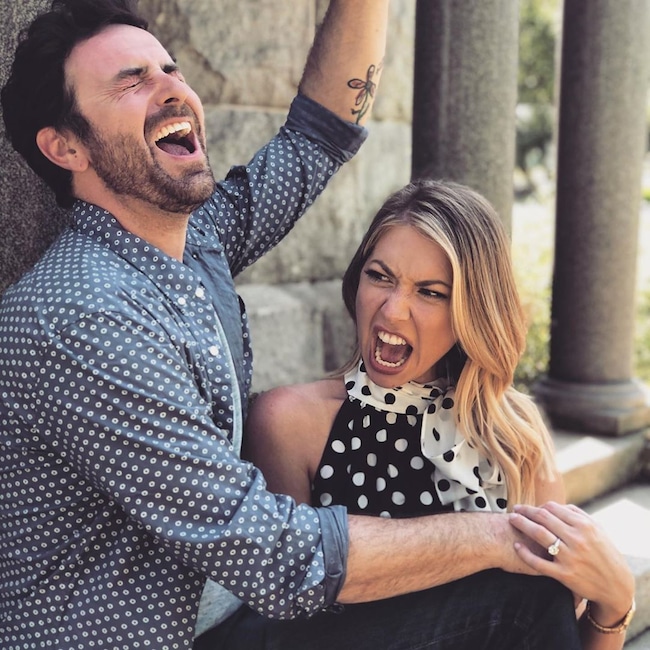 Knowing how much Stassi loves true crime and the macabre, Beau popped the question at Hollywood Forever Cemetery in July 2019. 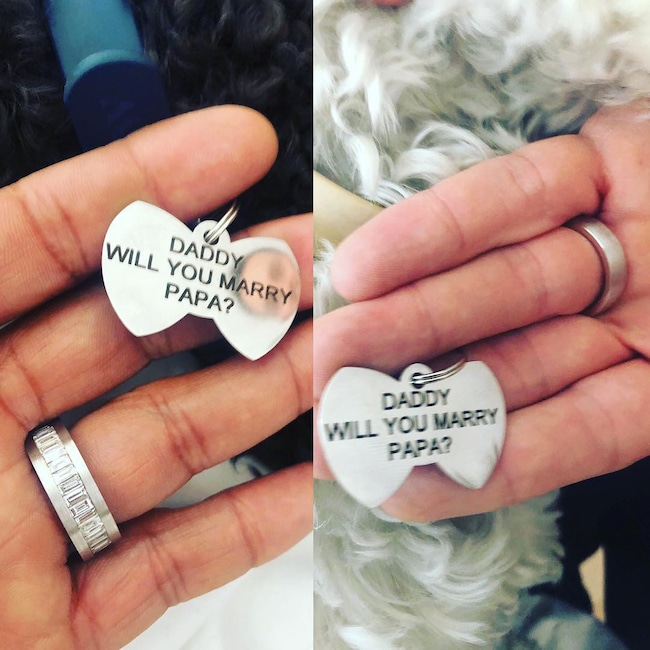 In April 2019, Malone had special tags engraved and sent the couple's poodle mixes, Boomer and Barkley, over to their other dad with a special question.

"He gave me a present on his birthday. How could I say no?" Lemon wrote on Instagram. 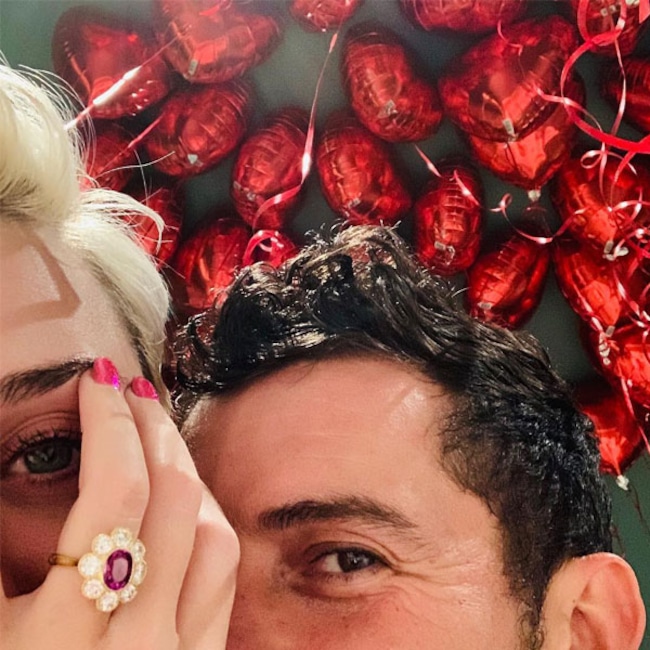 On Valentine's Day in 2019, after dinner at an Italian restaurant in New York, Bloom proposed during a helicopter ride. He gave Perry a love note ostensibly to distract her while he pulled the ring box out of his pocket, and the champagne sloshed around a bit, but overall, it was "really sweet," Perry said. The night only got better when, upon landing, Bloom had arranged for 30 friends and family members to be waiting for them to celebrate their engagement. 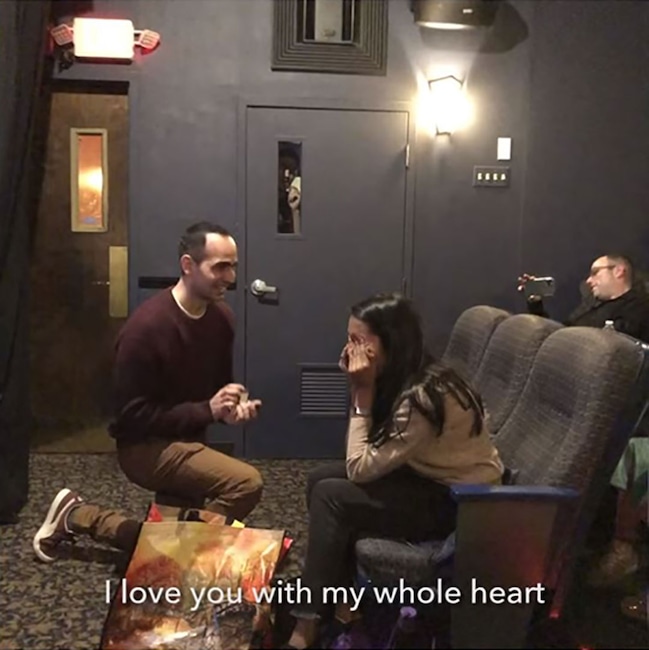 Lee's January 2020 proposal rightly made them celebrities for a news cycle when he took Sthuthi—his high school sweetheart—to a screening of Sleeping Beauty (in cahoots with Sthuthi's mom), and the shot of Prince Phillip waking Aurora up from her cursed sleep with a kiss was edited to look like cartoon versions of Lee and Sthuthi, courtesy of illustrator Kayla Coombs. And then his cartoon self made as if he was tossing Lee the ring to give to his beloved and urges him to get to it.

"She was sort of expecting the proposal around this time so I knew I had to be pretty sneaky if I wanted to give her a good surprise, because she is very astute, no pun intended, and you know she's a doctor so she is very smart, very cerebral," Lee told E! News after the video of his carefully laid plan panning out went viral.

Good thing Sthuthi's a cardiologist because... be still our hearts!

If you're getting performance anxiety just thinking about it, remember, not every gesture has to be rent-out-a-stadium grand, even on a normal day.

Rather, it's all about telling that special person that you're in it for the long run—to the altar and beyond.