Mark Wahlberg Gives a Hilarious Update on His "Feud" With Dr. Oz

On Monday, the actor offered an update on his ongoing fitness feud with Dr. Oz during his visit to TODAY. Sitting down with news anchor Harry Smith, Wahlberg revealed that their breakfast debate made its way to the gym for a special episode of The Dr. Oz Show airing March 4, where the Spenser Confidential star challenges the television doctor to join him during one of his workouts.

"I don't think he knew what he was getting himself into, but he was a trooper," Wahlberg said of their sweat sesh, adding, "I squashed him like a grape. That poor thing, he didn't know what would happen."

Wahlberg gave E! News a little taste of how their day at the gym went while, saying, "It was good. It was not so good for him. But, you know what? He stuck it out. He handled it like a man. I don't think he was really prepared for what we were doing. He didn't realize how intense it was gonna be." 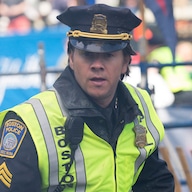 He also admitted that he doesn't think Dr. Oz is totally in the wrong anymore: "I think it depends. I really felt the benefits of fasting...But, I'm a little old school, too. So, I do like to have a nice meal in the morning. And I can burn it off."

Dr. Oz proved that there was no bad blood between him and the star on social media with a pic of the two sharing a hug after their workout. "I can't feel my body — but all worth it to bring @markwahlberg over to #TeamNoBreakfast (even if just for a day.) He also gave fans an important update: "No defibrillator needed for @markwahlberg!"

Their hilarious feud dates back to January, when Dr. Oz declared himself an advocate for "time restricted eating," or intermittent fasting, before a workout as it helps to burn more fat. Wahlberg, on the other hand, is a big proponent of enjoying a meal before he hits the gym, which sparked their social media debate.

.@markwahlberg talks about his breakfast “feud” with @DrOz and how he recently invited the TV doctor to work out with him: “I don’t think he knew what he was getting himself into, but he was a trooper. I squashed him like a grape.” pic.twitter.com/ebMhpf16T7

"We've got beef now," the Daddy's Home star declared in a video directed at Dr. Oz, where he pitched the idea of facing off in a workout together. "I'm telling you, you'll need a defibrillator when I'm done with you…you gotta have food. Food is your friend."

Taking his video in stride, Dr. Oz fired back with a video of his own—only he decided to do push-ups as he delivered his smack talk. In another video, the daytime host brought his Instagram followers into the hospital and said, "When you work out with that full stomach of yours, I'll be defibrillating you…You'll come back and then we'll keep working out."

Moments before heading to the gym before their highly anticipated showdown, Mark posted a video of himself digging into a big breakfast. He captioned the post, "@dr_oz hope you're ready. Eat up buddy, it'll do you well." We can't wait to see how this all unfolds.

Wanting to shed more light on the benefits of intermittent fasting, Dr. Oz stopped by E!'s Daily Pop to discuss why he's such a staunch supporter of the popular dieting method.

"Quite frankly, for kids, they should probably eat breakfast," he said. "But for the rest of the population…it doesn't make medical sense to eat breakfast when you first wake up. That was only part of an advertising campaign many years ago. It's not part of any studies that have been done. And quite the opposite, it turns out intermittent fasting does seem to help focus better, sleep better, have less heart disease rates; it influences a whole slew of opportunities to make us healthier. Including longevity."

He continued, "It's already sort of out there, but now the medical community is also showing that it's beneficial. So, I think we ought to just cancel breakfast—or, more importantly, just delay it a couple hours. That way you get the best of both words."

Dr. Oz made sure to stress that intermittent fasting doesn't call for skipping meals altogether, adding, "I never want you to be hungry. I don't want you to be suffering at all."