In the season 10 finale of The Real Housewives of New Jersey, the Garden State OG was confronted with the knowledge that Danielle Staub had sold her out, revealing that she'd egged her on during the jaw-dropping moment mid-season when she pulled Margaret Josephs' hair after getting a drink dumped over her head. And she did not take it well.

As sister-in-law Melissa Gorga let her and the entire cast know that Danielle had spilled the beans, Tre seemed to be calculating her best plan of action now that the damaging information had been revealed, saying she felt badly, but hoped the producers had no plans to share the footage with the world. The only problem? As Melissa explained, "They are gonna use it." (Previously unseen footage backing up Danielle's claim had already aired during the season's penultimate episode.)

Backed against a metaphorical wall, Tre panicked, broke the fourth wall and flipped off the camera. She then threw her drink in the air, almost directly into Dolores Catania's face, before bolting out of the party, knocking over an entire table's worth of cups in the process. It was wild. 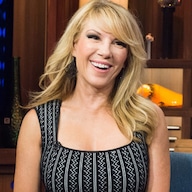 Of course, she's far from the only Housewife to ever get caught in a lie, sold out by video and audio footage catching them in the act. While we wait to see how Tre defends her actions during the sure-to-be explosive reunion special, let's take a look at all those who've come before her. 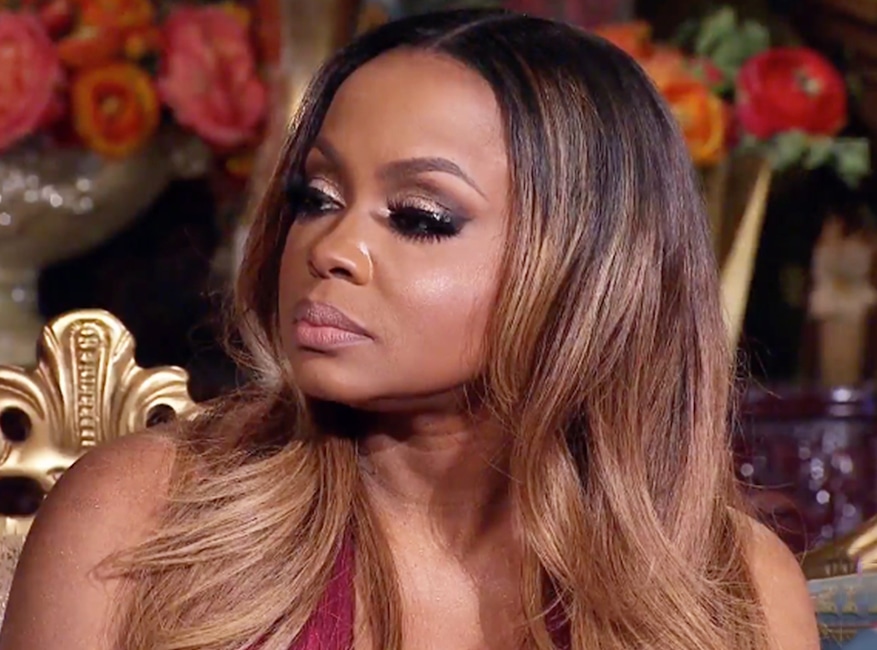 Throughout the ninth season of The Real Housewives of Atlanta, Kandi Burruss and Porsha Williams feuded over an incendiary claim that the former and her husband Todd Tucker had planned on drugging the latter so they could have sex with her. Naturally, Kandi wanted to know who among their circle had planted in Porsha's mind that she was an attempted rapist. When it came out during the reunion that Phaedra Parks, her one-time bestie, had completely fabricated the story as a means of taking Kandi down, it was curtains on their friendship and on Phaedra's time on the show. She was not asked back for season 10. 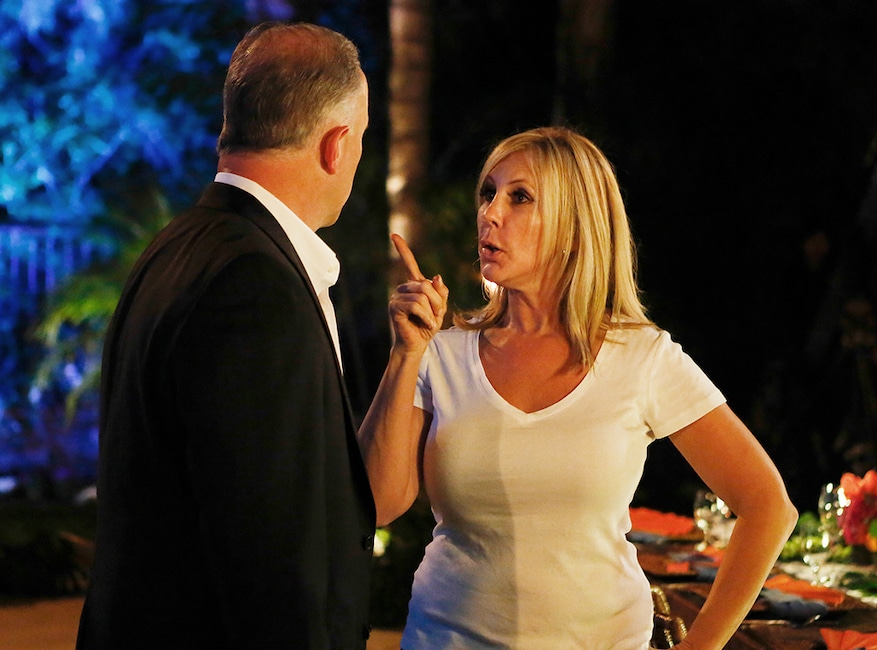 Season 10 of The Real Housewives of Orange County was dominated by the cancer diagnosis received by Vicki Gunvalson's then-boyfriend Brooks Ayers. Or, more accurately, whether or not it was legit. While the rest of the cast worked overtime to get to the truth, it was eventually revealed—on E! News, no less!—that some, if not all, of Brooks' story was fabricated wholesale. How much the OG from the OC knew, however, remains a mystery. She contends she, too, was lied to, while there are plenty who beg to differ. 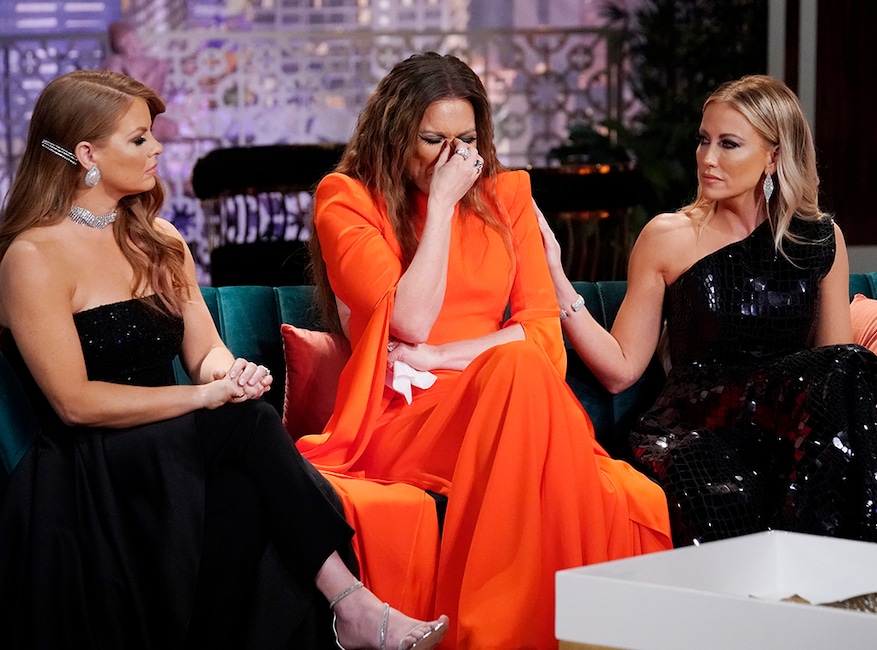 LeeAnne Locken did not have an easy time at the taping for The Real Housewives of Dallas' fourth season reunion. Not only was she confronted with the footage proving just how many times she used racial slurs to refer to new cast member Kary Brittingham, but she was even shut down by host and Bravo overlord Andy Cohen when she tried to blame production on her unorthodox wedding, with its hours-long gap between ceremony and reception and the complete lack of food at said reception. 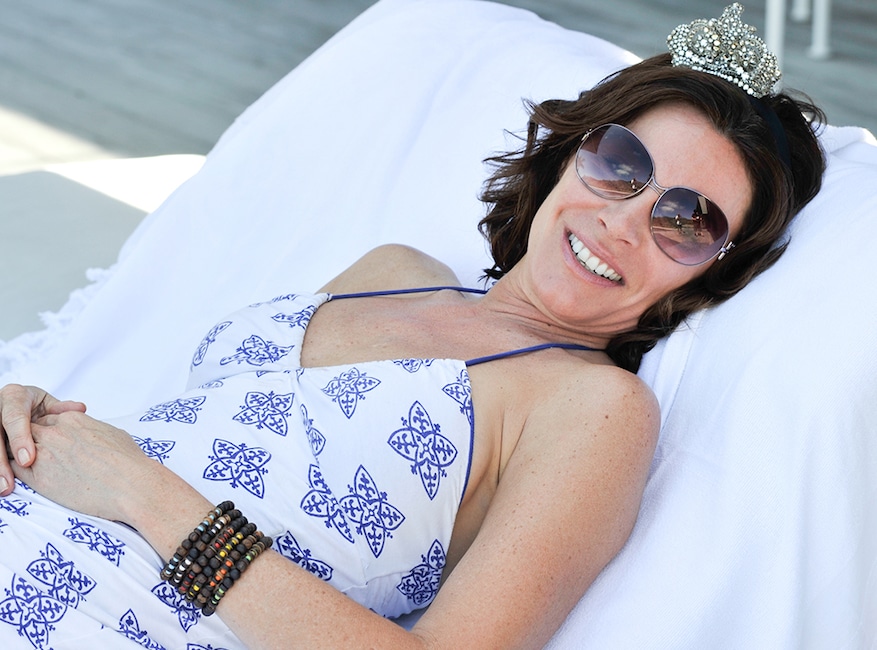 When the ladies of The Real Housewives of New York City took a girls trip to St. Barts in season five, Luann de Lesseps was in a relationship with former beau Jacques. However, after a wild night of partying, she brought Johnny Depp-lookalike Tomas back to the villa and tried to cover it up. Unfortunately for her, her phone call in French to make sure Tomas got his story straight was caught on her mic and translated for all of America to read. Oops. 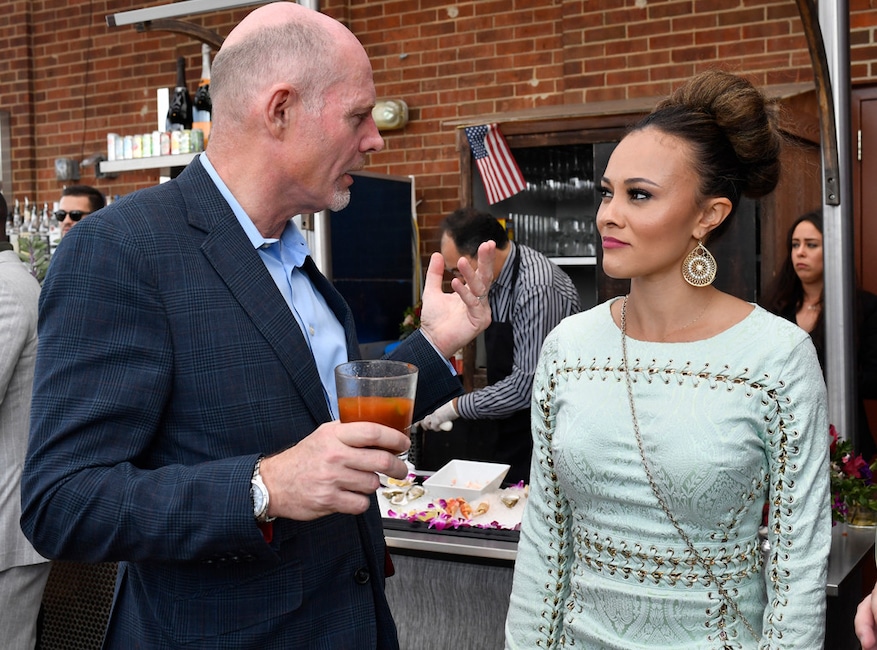 While not a Housewife himself, the husband of The Real Housewives of Potomac star Ashley Darby was caught up in season four when an accusation of sexual assault was levied against him by a cameraman working on the show who accused Michael of "grabbing and groping" his butt while filming at Monique Samuels' baby shower in 2018. While charges against him were dismissed due to insufficient evidence, footage of what appeared to be the aftermath of the incident ultimately aired during an episode of midway through the season, with audio capturing the cameraman repeatedly telling Michael "Don't do that!" At the reunion, he claimed he'd merely bumped into the man and asserted that everyone else's claims against him were false. Not too many people present seemed to believe him. 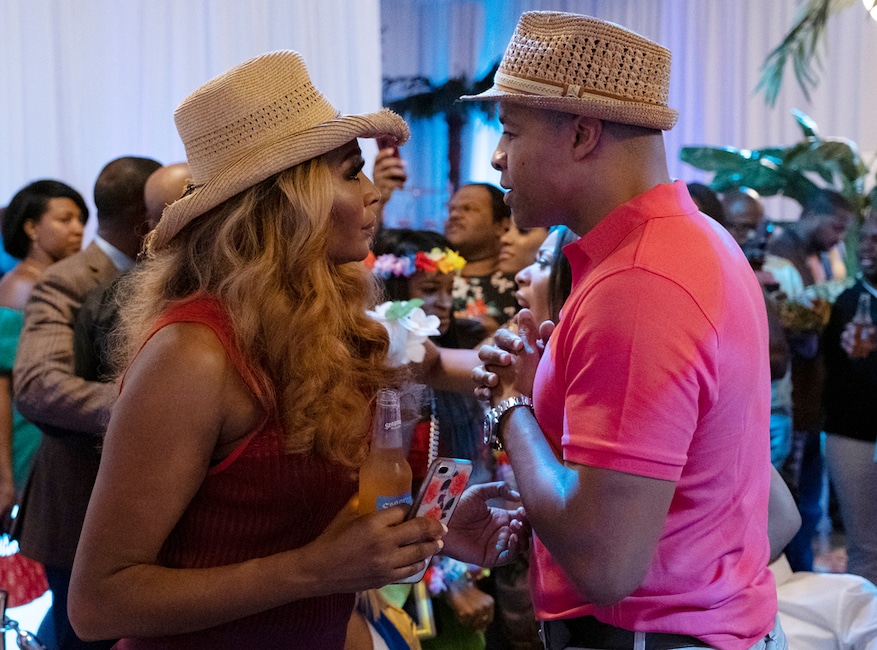 In season 11 of The Real Housewives of Atlanta, everyone was surprised when a very pregnant Kenya Moore, who'd left the cast after the previous season, showed up at one of bestie Cynthia Bailey's events. With no love lost between them, NeNe Leakes more than most. And while Cynthia swore to her other pal she had no idea Kenya would be there, but a hot mic catching her telling beau Mike Hill "I'm supposed to act like I didn't know Kenya was coming" didn't help her argument. And when she was caught again while mic'd speaking with Kandi Burruss off-camera, saying "I just want to make sure we was on the same page, setting up how Kenya got here," it only made matters worse. 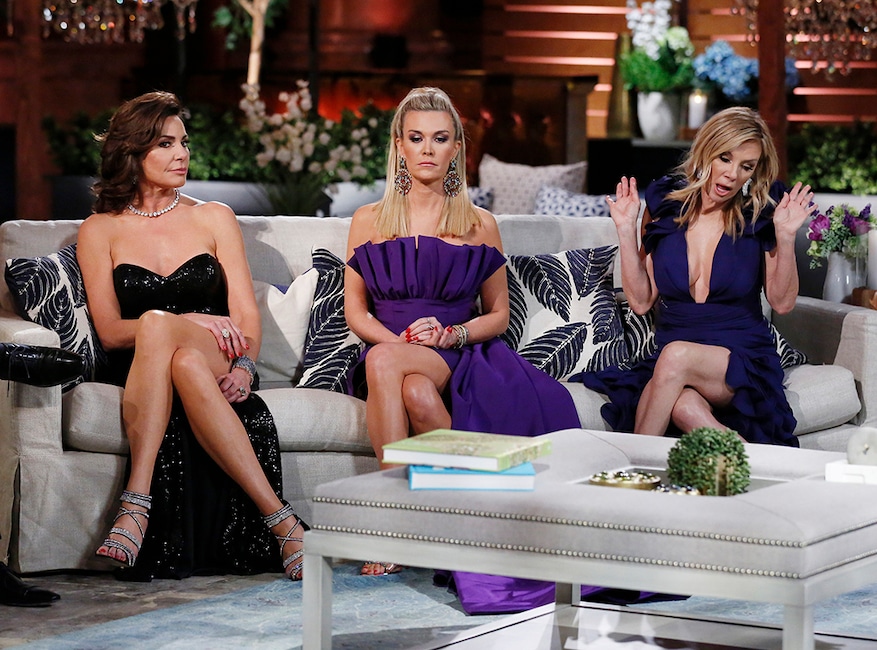 Throughout season 11 of The Real Housewives of New York City, Ramona Singer was caught on camera explicitly telling people to exclude her co-stars from her birthday celebration, specifically singling out longtime pal Sonja Morgan, and changing tables at an event she'd brought Dorinda Medley to as a plus-one, leaving Dorinda to sit alone with strangers, all while telling the ladies that she'd bore none of the blame. When confronted at the reunion with footage, she first said, "I didn't realize that was a lie, sorry," before squirming through some excuses that no one else on the couches really believed. 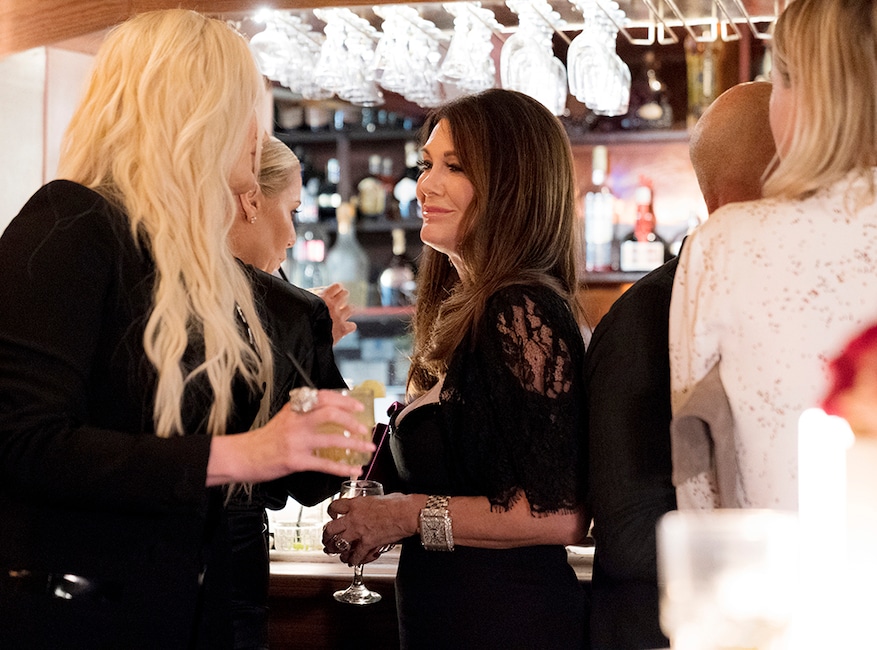 We may never know the whole truth about the central drama in season nine of The Real Housewives of Beverly Hills, whether or not Lisa Vanderpump was responsible for leaking the story about Dorit Kemsley and a dog named Lucy Lucy Apple Juice to the press, but we do know that LVP was caught in at least one lie as it pertained to the storyline that pushed her off the show for good. Over the course of one conversation, she both denied knowing that Teddy Mellencamp Arroyave was involved in the plot to expose Dorit and then emphatically claimed that she did know once she was reminded that she'd texted Dorit to warn her of Teddy's involvement. Oops.

In the shocking last few episodes of The Real Housewives of New Jersey's tenth season, it was revealed that Teresa Giudice had encouraged Danielle Staub to lay hands on Margaret Josephs during a jaw-dropping, hair-pulling fight earlier in the season—and there was footage to support the claim. And in the finale, when it came to Tre's attention that all would be revealed, she lost her mind, flipping off the camera and running out of the scene. We can't wait to see how this plays out at the reunion.