Billie Eilish Is at the 2020 Oscars and No, She Can't Believe It: "This Is So Crazy" 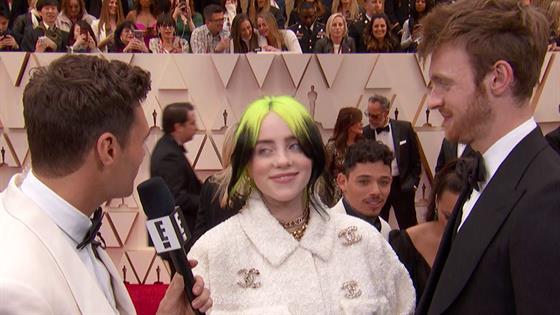 Now Playing
Up Next
Billie Eilish Is Speechless at 2020 Oscars: "It's Crazy"

The bad guy has arrived at the 2020 Oscars. It's Billie Eilish, duh.

Just two weeks after her historic wins at the 2020 Grammys on Jan. 26, the pop star is back on a red carpet at the 92nd annual Academy Awards. And in true Billie fashion, the star is the most trendy person in the room, having arrived wearing head-to-toe Chanel, but making it her own, including rocking her signature green hair.  Alongside her was her big brother and collaborator Finneas O'Connell, who was sporting his own stylish look in a Gucci suit.

And despite just dominating at the Grammys, though she didn't feel like she belonged, infamously mouthing "Please don't be me!" when the final award of the night was handed out, Billie said she felt "definitely even more" out of place on the red carpet at the Oscars, telling Ryan Seacrest, "This is crazy. This is, like, so crazy."

Though she's had two weeks to process her five major wins at the Grammys, including for Album of the Year and Record of the Year, Billie admitted she still hasn't fully processed her success, even if she has that iconic photo with all of her awards to prove it.

"It's crazy," a close-to-speechless Billie said. "I don't know what to say to that. I don't know. It was surreal and it's still surreal. Every time I see that picture...I don't believe it."

But when it comes to their music-making process, the brother-sister duo aren't going to let their Grammy success change anything, with Finneas explaining, "We haven't made music with that goal in mind, so I think we're just going to make music the same way. We're just zeroing back in on what we love about music, where we're excited to take our audience, what's going to be fun to perform live." The 18-year-old is, of course, at this year's Oscars because she's one of the broadcast's performers. The Academy of Motion Picture Arts and Sciences' official Twitter account announced on Jan. 29 that the 18-year-old star would be gracing the Dolby Theatre's stage in Los Angeles.

Before hitting the carpet, Billie took to Instagram Stories to share her excitement for the big night. "honored to be performing during the in memoriam segment for the oscars tonight covering a song i've always loved," she wrote. "watch with us."

As for the other performers tonight, dual nominee Cynthia Erivo, Elton John, Idina Menzel, Chrissy Metz and Randy Newman will all be performing the tracks nominated for Best Original Song.

And Billie might just find herself nominated for an Oscar next year as she's set to sing the theme song for the upcoming James Bond film No Time To Die, making her the youngest performer to tackle the honor when the film hits theaters this April.

"It feels crazy to be a part of this in every way. To be able to score the theme song to a film that is part of such a legendary series is a huge honor," the singer said of tackling the 25th Bond film's theme song. "James Bond is the coolest film franchise ever to exist. I'm still in shock."