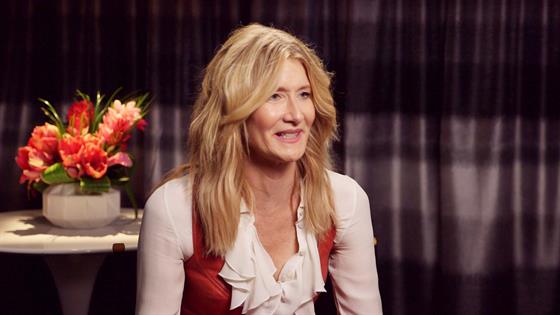 It's almost time for the big night!

The 2020 Oscars are almost upon us, which means all of Hollywood's biggest celebrities are gearing up for their time in the spotlight. Actress Laura Dern sat down with E! News' Melanie Bromley to chat about her role in the hit film Marriage Story, and what it's like being nominated for Best Supporting Actress.

"Lovely. We had our last screening and Q&A for Marriage Story on Saturday night and someone from Netflix said, 'And your first one was August 8th,' and I just realized that the journey every year that a group of movies go through, and the blessing of it, but also the bittersweet nature of celebrating with those who become family," she shared about the process of becoming an award winning film.

The film, written and directed by Noah Baumbach, has gotten a lot of praise for its very real portrayal of divorce and marriage. While many people, including Melanie, ended the film feeling less than excited about the potential of ever walking down the aisle, Laura revealed that she had a much different take on the outcome of the movie.

"I find the movie an incredible love story, so I believe in love more than ever when I see the movie," she shared. "Because love never goes away. And at the end of the film, it ends with the gesture based on love and loving. Through all the battle and all the heartbreak and divisiveness, when you love you love forever. Even if the relationship changes." That's one way of looking at it! Laura's experience this year has also been far different from that of many of her peers. She also starred in the hit film Little Women which was directed by her Marriage Story directors partner Greta Gerwig.

"They're both incredible. It's so amazing that they're both nominated for Best Picture. They've made perfect movies in my opinion," she shared. "They both gave me such beautiful and equal collaborative experiences with unbelievably different characters. As Greta says, 'Oh you know with Noah you tear families apart, and in my movie you're the one who brings the families together.' That's just delicious and wonderful."

"Their differences I feel like come from the fact that she is an actor and he as a filmmaker has always been the one that bears witness to the performance," she continued. "While she was sort of more inside it. Like she was almost playing it with me. That was both amazing, delicious ways to work with the director." As for how she's preparing for the big night, Laura admits she has no full-proof system.

"I think it's so individual. It's like going to a swim meet when you're 10. What makes you comfortable and relaxed in this moment that people say is special," she revealed of her process. "What I know is having first come as a nominee at 22 is that I let anxiety take over really being in the experience...So hopefully I'll able to do that more and more with experience and gratitude working with people I love so much."