It'd be nice to say no one saw Meghan Markle and Prince Harry's announcement coming, but the reality is this was predicted months ago.

Some commentators speculate Meghan and Harry's departure from the Royal Family became a done deal the day they announced their engagement. Others cite the press' harsh treatment of the Duchess as the true cause of their decision.

Regardless, this series of events began to brew months ago, when there was talk of the Prince and former actress moving to Africa or Canada in order to establish a "bespoke" role for him and his then-pregnant wife.

Of course, this never came to fruition. Instead, Harry, Meghan and baby Archie Harrison visited the African continent during a tour of the commonwealth. By this point, the couple had already established a new household separate from that of Prince Williamand Kate Middleton, although what they really aspired to do was create an entirely new court—an idea the Queen swiftly vetoed.

Now, new details are emerging about the chain of events that led to their bid for independence. To learn more, see the timeline below:

Prince Harry Begins Early Talks With Prince Charles: The Telegraph reports, "Prince Harry is understood to have contacted the Prince of Wales about spending more time in Canada and America just before Christmas, but was told he needed to come up with a carefully thought-out, detailed plan." Shortly after, the Duke and Duchess of Sussex begin their 6-week leave and depart for Canada, where they spent the holidays with Meghan's friends and family, including mother Doria Ragland. The Telegraph says it's believed the couple used this time away to "hold meetings with various PR executives." 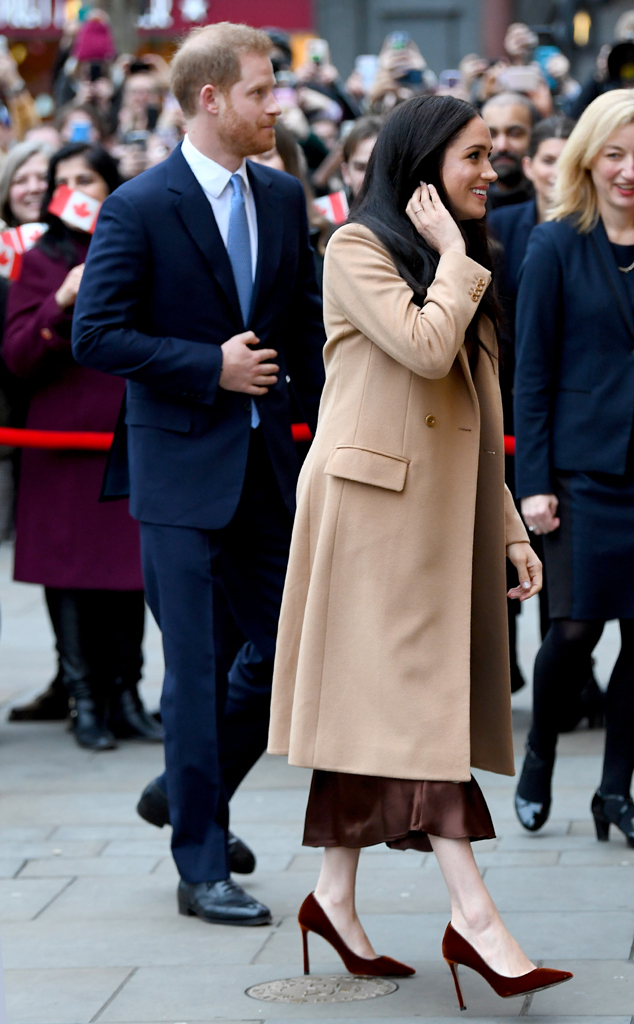 Prince Harry Sends Prince Charles Their Draft Proposal: According to the Evening Standard, the Duke and Duchess of Sussex sent Prince Charles a "draft proposal about his future role... early in the New Year," but was told the palace needed more time to "think through the complex implications, particularly over funding."

Meghan Markle and Prince Harry Leave Canada, Without Archie: Following the end of their 6-week leave, the Duke and Duchess of Sussex returned to London to attend their first royal engagement, but left their son Archie in the care of good friend Jessica Mulroney, reports People. The outlet adds Meghan and Harry will join Archie in the near future.

Courtiers Block Their Meeting With the Queen: Upon their return to the UK, the Duke and Duchess reportedly requested a meeting with Queen Elizabeth at the Sandringham estate, but was informed she would not meet to discuss their plans without first detailing their proposal with Prince Charles. That being said, the Telegraph says the Queen was "happy" to meet with them if not for business purposes. Moreover, the Queen instructed Harry to further iron out their plans before going public with the announcement.

News of Their Stepping Back Leaks to Tabloids: According to multiple outlets, Meghan and Harry decided to prematurely announce their move to North America and their decision to step down as "senior" royals, after catching wind of a leak. Indeed, a day before their announcement, The Sun reported Prince Harry and Meghan's potential move to Canada.

While the news could've been dismissed as tabloid fodder, the couple decided to make a swift announcement. The Telegraph reports Meghan and Harry knew "they were unlikely to get their plans signed off by Buckingham Palace, they decided to take matters into their own hands."

Meghan Markle and Prince Harry Release Official Statement: With their plans now revealed, the two officially announced their intentions to "make a transition this year in starting to carve out a progressive new role within this institution." Their over 200-word announcement details their hope to balance their time between North America and the UK and become financially independent, all while "continuing to support Her Majesty the Queen." At the same time, the duo launched their SussexRoyal website, which has answers for everyone's burning questions—although, The Telegraph's sources claim Buckingham Palace insiders have begun to "pick apart" their statements for errors. Buckingham Palace Releases Shocking Statement: In response to the Duke and Duchess' announcement, Buckingham Palace confirmed suspicions the couple had essentially gone rogue. "Discussions with The Duke and Duchess of Sussex are at an early stage," the statement began. "We understand their desire to take a different approach, but these are complicated issues that will take time to work through."

Queen Elizabeth IIHolds Emergency Meeting: On the wee hours of Kate Middleton's birthday, the Queen called an emergency meeting with Prince Harry, Prince William and Prince Charles to discuss the matters at hand, multiple outlets report.  ITV News' royal editor Chris Ship also reported the teams are expected to work "at pace" in order to find a solution in the coming days, if not sooner.